Skip to content
USA Online Sportsbooks | Sports Betting | NBA Draft Lottery Odds: Who Will Get The Number One Pick? 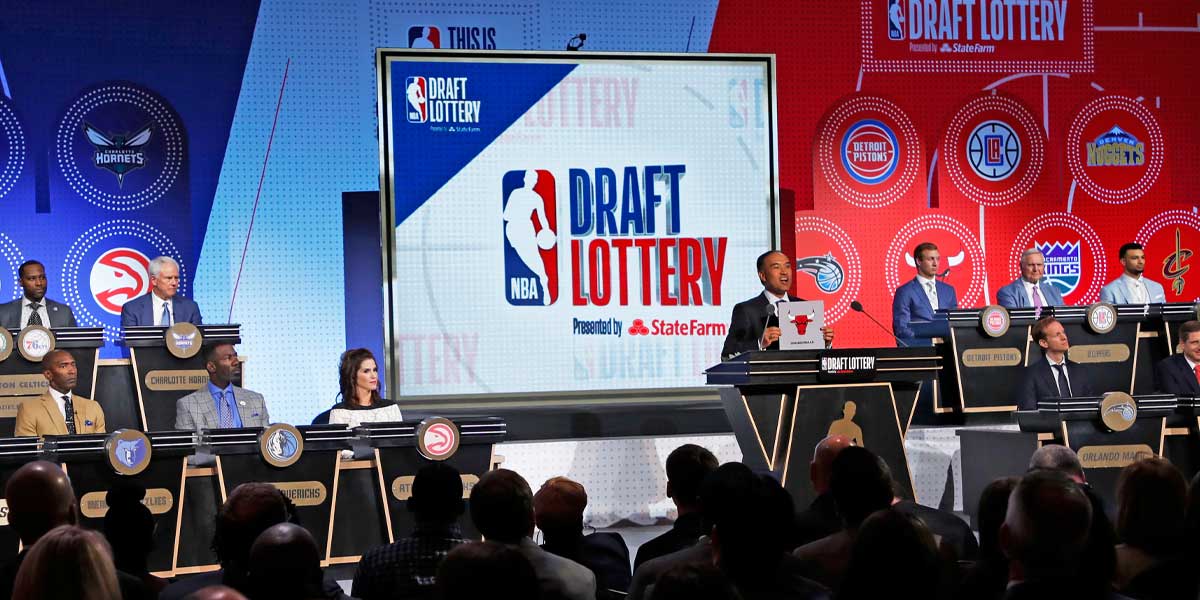 The NBA Draft moved from Thursday to October 16.

Online sportsbooks have different odds posted for which team will win the draft lottery and obtain the number one overall pick. There are also odds for the top five draft picks in this year’s draft.

This will be the second year that the new draft lottery format will work under the changed rules that give the teams with the worst three records a 14% chance of winning the number one overall pick.

Due to the season coming to an abrupt end because of COVID-19, the Golden State Warriors, Cleveland Cavaliers, and Minnesota Timberwolves all have a 14% chance of winning the draft lottery and gaining the number one pick.

They are also the favorites on NBA sportsbooks with +550 odds each of being the top pick.

The NBA Draft lottery could be very unpredictable. Just last year in the 2019 draft, just one of the teams that had a 14% chance of getting number one, landed in the top three.

The top two picks had just a 6% chance each of getting the number one pick.

Sure, betting on the Warriors, Cavs or Timberwolves could seem like the safest bet to make but being how spontaneous the lottery system is, bettors can bet on any of the teams that are in the lottery process and receive a nice payout with it.

The Top 5 Pick In The NBA

The Players that are going to be selected with the top five picks in the draft seem to be set. The question is in what order will they be selected?

Anthony Edwards is favored to be the number one pick with +110 odds and he is more than deserving of it.

He averaged 19.1 ppg, 5.2 rpg and 2.8 apg as a freshman at UGA. Edwards is just one of two players projected to go in the top five that played a full season of college basketball which could push him over the top.

James Wiseman has +140 odds of being the second overall pick.

Wiseman played just three games at the University of Memphis before being suspended for accepting funds from the team's head coach. In those three games, he put on a clinic having averaged 19.7 ppg, 10.7 rpg and 3 bpg.

If not taken before, Wiseman could be an easy choice for bettors betting on the second pick.

LaMelo Ball has had the spotlight shined bright on him since he was in high school. In high school, he was most famous for scoring 92 points in a game.

Adding to his highlight reel are his +150 odds of being selected third overall. Ball did not play college basketball as he was not eligible due to signing with an agent which led to him playing overseas in Australia.

Ball proved his doubters wrong who said he did not have the experience to compete in a professional manner by averaging 17 ppg, 7.6 rpg and 6.8 apg.

Deni Avdija would be the second international player drafted in the top five in the past three years if all goes right.

He is the favorite to be drafted at number four with +200 odds.

Avdija has an advantage over the rest of the draft being that he played professionally in Israel. During his two year international career he averaged just 4 ppg and 2.4 rpg.

Bettors could consider taking Obi Toppin here who is at +300 odds or even Cole Anthony with +800 who would offer a great payout.

At the fifth overall pick, Obi Toppin is favored with +225 odds.

Toppin put on a clinic across the board at Dayton averaging 20 ppg, 7.5 rpg, 2.2 apg, 1 steal and 1.2 blocks. He is one of the most complete players in the draft and the fact that he is favored to go five could go wrong as he could certainly be taken earlier.