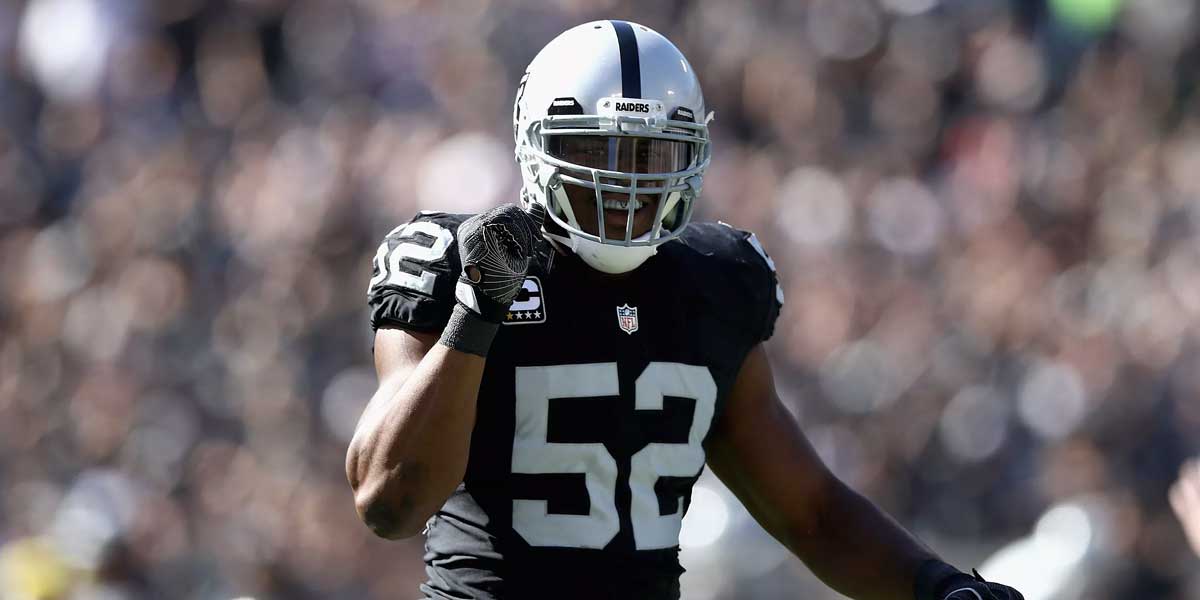 OAKLAND, Calif. – Last season, the NFL was taken back when the Oakland Raiders decided to trade their best player in Khalil Mack.

Mack was traded for a handful of draft picks from the Chicago Bears in what appeared to be one of the most lopsided trades in NFL history. At the end of the deal, the Bears received the All-Pro and Defensive Player of the Year in Mack, a 2020 2nd round pick, and a conditional 2020 5th round pick.

With the picks, the Raiders were able to draft Alabama Crimson Tide running back Josh Jacobs at the 24th spot and used the other 2019 pick to pair with an offensive lineman in order to move up in the draft.

This trade was only one of the Jon Gruden-led transactions, but this certain trade swings full circle on Sunday. For the first time since being traded, Mack will see some of his old teammates, as he takes the field as a member of the Chicago Bears in the NFL London game. With this, some of the staff at USAOnlineSportsbooks went head to head on this blockbuster deal and what it means for the betting odds in their upcoming game.

Anthony Shafnisky: What was your initial reaction when hearing about the Khalil Mack trade?

Hasan Nabulsi: Shock. I was in pure shock that the Raiders would trade away their best player for any draft picks. Whoever you select in the draft you can only hope that they turn out to be as much of an impact player as Khalil Mack. I was also totally on the Chicago Bears bandwagon after the trade. The addition of Mack instantly made them Super Bowl contenders.

Michael Molter: It made sense from both sides of the deal but losing a player like Mack is always going to be a bigger impact. At first, I thought Gruden had lost it but in reality, it was a fair and balanced trade for what both teams are trying to accomplish.

A: How has your opinion changed a year removed from the trade?

H: Just one glance at the numbers and you can see just how valuable Khalil Mack is to an organization. Mack has 17 sacks and 10 forced fumbles since the trade. The entire Raiders defense has only had 18 sacks and eight forced fumbles. Jon Gruden himself has gone on record saying that the Raiders wanted to keep him and that the team needs a better pass rush. The Raiders traded him for two first-round picks but even in the draft, the team wasn’t able to get the picks they wanted so I still believe it was a mistake on part of the Raiders.

M: I have definitely leaned towards giving the Raiders the nod. Being able to see the draft picks and how the Raiders were able to flip picks for talent showed they had a full plan in mind. Though some (Antonio Brown) didn’t work out for the Raiders, they have still set themselves up quite well with loads of cap room, a workhorse running back, and getting value for a player that wanted his money.

A: Though both teams seem to have benefitted, who won the trade overall?

H: The Bears have won the trade overall in the short term. The Bears’ Super Bowl window has been opened up by the presence of Mack on their team. However, that window isn’t very large. On the opposite side, the Raiders felt as though their Super Bowl window wasn’t open even with Mack so why not try to rebuild? They will more than likely benefit more in the long-term having saved the money and accumulated picks without him.

M: Hands down the Raiders. Even with Mack on the roster, the Bears couldn’t seem to make it happen in the playoffs (kicking jokes aside). The Bears only win the trade if they find themselves hoisting the Lombardi Trophy at the end of the year. As for Raiders, their only goal was to rebuild and their plethora of draft picks makes that much easier. Just like the Robert Griffin III and LA Rams trade, those extra first-round picks can go a long way for an organization.

A: Does Khalil Mack record at least half of a sack against his former team?

H: The Raiders have allowed eight sacks all season which is impressive given the fact that the team gave up 52 sacks last season. Still, Mack has 4.5 sacks and four forced fumbles so far this season. I’m no mathematician, but the numbers tell me that he’s going to get at least one sack on Derek Carr and the Raiders. Just watching him through the first four weeks tells me he is set to have a big performance.

M: If I were to bet on it, I would lay my money on the fact that he would have a sack. You better believe he wants to prove himself but at the same time you also better believe that the Raiders will do everything in their power to keep him at bay. Likely he does get a sack, but for the emotional support behind the Raiders, I’ll go out on a limb and say he doesn’t make it happen.

H: Given the fact that Mitchell Trubisky is going to be out for this game, I expect it to be a low scoring slugfest just like the Bears’ last game against the Raiders. But I also expect the Raiders to come in with something to prove and to keep it close. I’d take the Raiders to cover the spread and I‘d easily take the under in this one.

M: The under seems like the safe play, as both offenses have seen some struggles as much as they have seen some success. However, over/unders in the NFL that are around 40 or lower are tough to manage. With that, I’ll take the over. As for the spread, even with the fact that there is no Mitchell Trubisky, the game is based in London and the Raiders let up the sixth-highest third-down completion percentage. I’ll take the Bears -5.