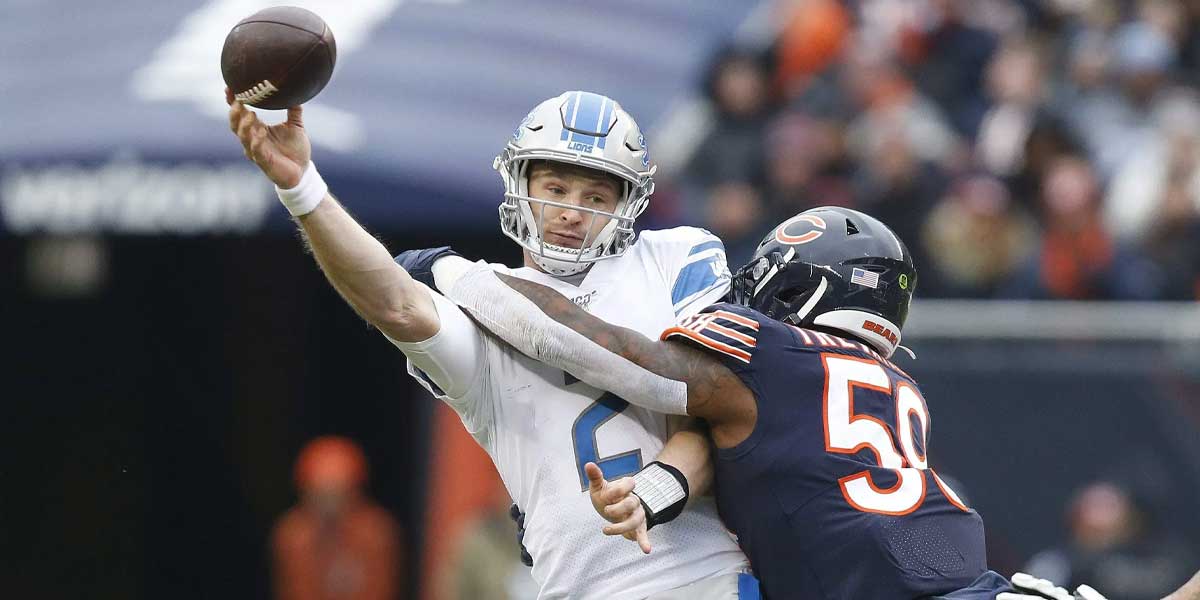 ATLANTA - Thanksgiving is here and all people can think about is football. Well, that and food of course. On such a great holiday, the NFL games played throughout the day has become apart of the Thanksgiving tradition. Eat and watch football games. With a great slate of games. US sportsbooks have lines on which teams leave Thanksgiving Day victorious.

At Ford Field in Detroit, the Detroit Lions and the Chicago Bears will face each other again in a rivalry that started in 1930. Once named Spartans, the Lions are trailing this series and look to upset them Thursday. With one win on the season against the Lions (+140), the Bears are at a -160 odds to their NFC North rivals. The over/under is also set at 38 points. Hearing news that Lions quarterback Matthew Stafford may be shut down this season is a big blow to this team. Coming in this game with a new quarterback against this talented Bears defense could mean wonders for Khalil Mack and crew.

This Bears offense looks to be very confused this year. Leaning more on the running game, expect this offense to keep the Lions offense off the field. David Montgomery has been more involved in the offense in recent weeks. Even with this running game attack, Mitch Trubisky and this offense can’t find the endzone as much as they did last year.

Expecting a low scoring match, this seems to be a good defensive game. Although both offenses will struggle, the Bears defense is just too talented and will take the victory over the Lions.

Jerry Jones has made it clear this season that what he wants to see is Dak Prescott the Dallas Cowboys franchise quarterback. With a new contract waiting for him in the offseason, Prescott’s play has proven he is worthy. Thursday, the Cowboys take on the Buffalo Bills in Dallas. Meeting for the 13th time, these two teams were famously remembered for playing against each other in back to back Super Bowls in the 90s.

Sitting at 8-3, this is the best the Bills have looked since the Super Bowl season. Head coach Sean McDermott has brought his philosophy to Buffalo and things are looking up. With this Bills defense ranked third in the league in passing yards per game, forcing Prescott to throw will be the key in this matchup.

Josh Allen has been exactly what the Bills thought when drafting him. Allen is leading the charge this year with new weapons John Brown and Cole Beasley. As one of Allen’s top targets, Beasley has continued his play with over 40 catches this year so far. Beasley looks to help the Bills beat his former team in his first game back in Dallas.

The Cowboys are 6-5 and every game is a must-win moving forward. This game is going to lean heavily on which offense can stay on the field the longest. With both defenses ranked top 10 in the league, one play can affect the whole game. Even with Prescott and the Cowboys having home-field advantage, the Bills will prevail.

There is a reason this game is set to kickoff at 8:20 p.m. eastern time. The New Orleans Saints and the Atlanta Falcons have combined for over 70 points four times in the last 20 meetings. This means an exciting game while enjoying a second plate of Thanksgiving food. These high-powered offenses are ready to take off in Atlanta Thursday night.

Drew Brees and this offense continue to light it up this year averaging 24 points per game. Even with Alvin Kamara missing a few weeks, this offense is still hard to stop. Michael Thomas is on pace to have 150 catches on the season. That will break Marvin Harrison’s single-season record of 143. The connection between Brees and Thomas will have to continue to beat the 3-8 Falcons. Averaging over 100 yards per game against the Falcons, expect to see big numbers for Thomas.

Dan Quinn is on the hot seat. Since the Super Bowl, the Falcons team has been declining and they are 10-17. One reason is the Falcons have been bugged with injuries on both sides of the ball. Even with this record, Matt Ryan and the Falcons will be prepared for the Saints. This is an NFC south rivalry between two teams who do not like each other. Big stars like Julio Jones and Ryan have had plenty of success against this Saints defense and look to continue.

A bitter rivalry with so many points that can be scored in this game. It is always exciting to see Jones and Thomas on the same field. This game will be close and high scoring. Expect this to be the biggest upset on the slate as the Falcons offense lead them to victory over the Saints.