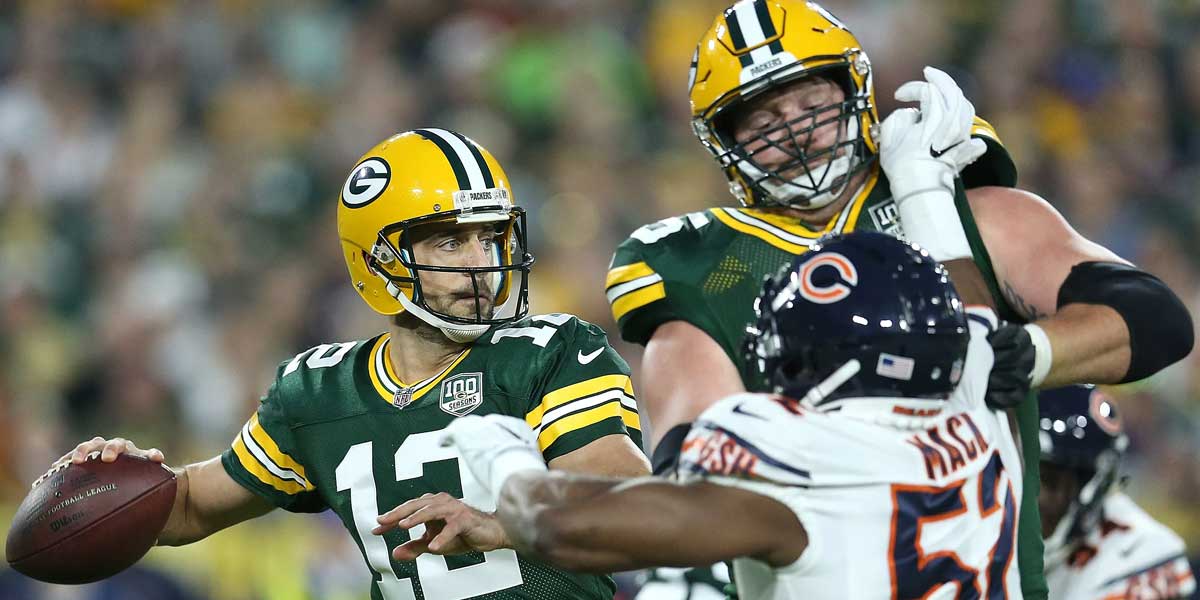 CHICAGO – The NFL season is upon us as the NFC-North rivalry of the Green Bay Packers and Chicago Bears takes place Thursday at 8:20 p.m. EST.

This intense rivalry has been going on for almost 100 years (1921) and is one of the closest series over time. In the previous 198 meetings, the Packers hold the advantage by two wins (97-95-6) but it is the Bears who won the last matchup.

The Packers though are not scared of this Bears team, as Green Bay (before last year’s loss) had won eight in a row at Soldier Field.

Betting On The Packers-Bears Game

The Green Bay Packers (+150) are the underdog as they travel to Chicago to take on the Bears (-170). The game is 3-points in favor of the Bears, but almost nine-tenths of every dollar wagered has been on the Packers +3.

In the NFL opener, 46.5 points is the over/under, where the Packers are estimated at 21.5 points while the Bears are sitting at 24.5.

No matter where you are planning on placing your wager (state-licensed casino/racetrack, online sportsbook in the US, or offshore sportsbook), the ability to shop lines plays a crucial role in betting on the NFL. For example, those looking to lay action on the Packers will find that the betting odds differ at a variety of locations – MyBookie: Packers +140, FanDuel Sportsbook: Packers +146, SportsBetting: Packers +148, Bovada: Packers +150.

While these differences may not look like much in the long run, they help bettors remain profitable much easier with their higher payouts. Never purchase the first line you see, as shopping lines on the NFL will allow you to find the price you are more willing to accept.

For the first half of the game, the Bears are 2.5-point (+110) favorites, which indicates that the Bears will have the lead at the half and win the game. However, if the Packers (+2.5, +240) can pull off that feat, they will be one step closer to winning the division with an opening week victory.

It isn’t necessary to bet on the teams to lead at the half and win the game, as the first half betting odds for the Bears (-160) and Packers (+130) are independent bets.

Additionally, those who are confident in one of the teams should entertain the idea of an alternate line. Instead of the 3-points given in this game, bettors can pick the Packers -3.5 (+230) or the Bears -9.5 (+210) for much better payouts. These alternate lines are a dime a dozen, so select the exact point spread you think the teams can beat/cover to increase your winnings.

This also works for the over/under, and looking at the Under 39.5 (+220) is a bet worth taking for those who believe the Bears defense will take care of business.

Prop Bets For The Packers And Bears Game

Prop bets provide hundreds of betting opportunities on the Bears or Packers and the wagers themselves may have nothing to do with the game’s outcome.

For example, with the recent kicking struggles from the Bears’ organization, a prop bet asking will a Bears kicker miss a Week 1 field goal is presented. Yes (-140) is the favorite but Bears’ kicker Eddy Pineiro had a successful preseason going 8/9 on field goals and 3/4 on PATs.

Still, a prop bet even stands for whether Pineiro will be replaced at any point during the regular season, where 'Yes' (-200) is a heavy favorite.

But for the game itself, who between the Bears and Packers will score first? Oddsmakers think the Bears (-130) will take this prize over the Packers (+100).

With a defense as strong as the Bears’, can they keep Aaron Rodgers from making the big play? The longest touchdown in the Bears-Packers game is projected to be 40.5 yards (where the odds are split evenly at -110).

Speaking of Rodgers… how many passing yards will he have at the end of the game? If you think he will have a field day against the Bears and break 267.5 yards, consider taking the over (-115).

But one prop bet that should be at the top of a bettor's list is the total receptions for Geronimo Allison during Week 1. With a 3.5-catch over/under, the over (+105) is actually the underdog – and something we would be quick to put our money on.

Who Wins The NFC North?

This game will have a major impact on the odds to win the NFC North, as both the Bears (+190) and Packers (+190) are the leaders amongst the four teams.