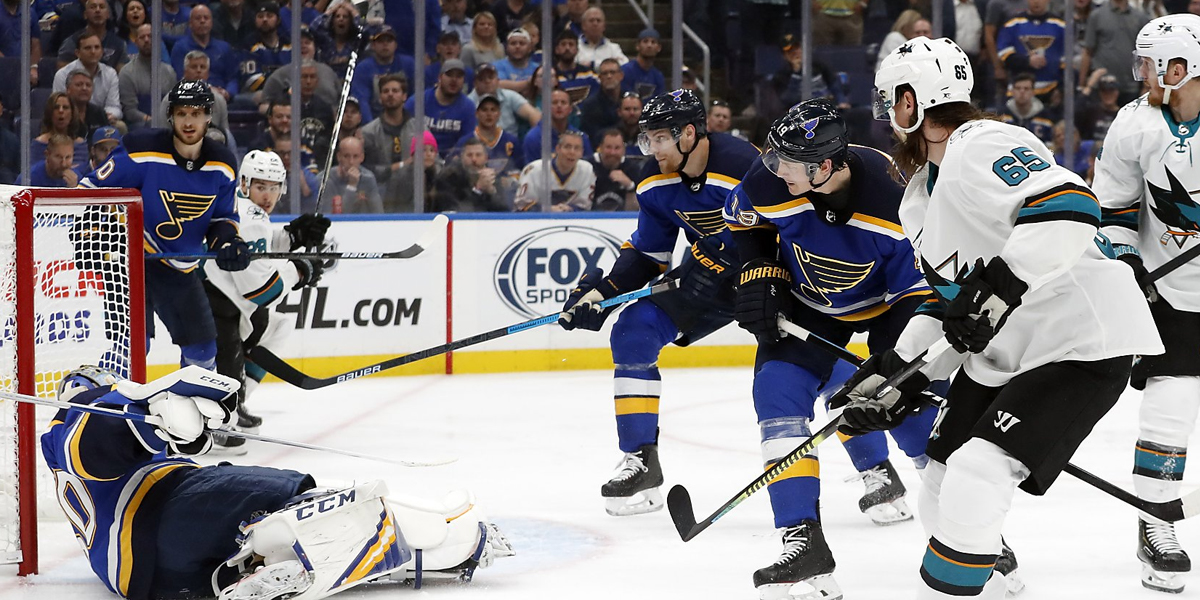 ST. LOUIS – An officiating error cost the St. Louis Blues a potential win in Game 3 of the Western Conference Finals against San Jose.

And like the Blues, bettors felt robbed after the hand pass no-call that gave the series lead to the Sharks.

For at least the second time during this Stanley Cup Playoffs, a blatant officiating mistake determined the outcome of an NHL playoff game. With summary accusations of match-fixing and other league malfeasance, the NHL can’t catch a break.

Fortunately, sports bettors can. If you backed the Blues in Game 3, at least two high-profile New Jersey books are refunding your wagers.

Unsurprisingly, FanDuel is one of them. After the Game 3 gaffe, FanDuel released the following statement:

“Due to the controversial nature of San Jose’s OT winner, we’re refunding all St. Louis [moneyline] bets from [Wednesday’s] game.”

FanDuel has made a habit of refunding bets or grading losing wagers as winners for controversial outcomes. They even police themselves.

Given that they now control over half of the sports betting market in New Jersey, this tack has proven to be an invaluable source of advertising.

But it also gives customers confidence that bad calls and league errors won’t spoil their wagers. Where the leagues have built-in integrity issues, FanDuel and other sportsbooks are repeatedly bailing them out.

And the notion is spreading to other operators.

Fellow New Jersey book PointsBet, a startup in the industry, is taking notes from FanDuel. The company also refunded certain Blues wagers, stating that it’s the fair thing to do.

“After a clear hand pass turned into the overtime winner for the Sharks, the Kommittee felt that the best course of action was to help out those dejected Blues backers. All Blues Pregame Moneyline Bets are refunding in FULL. We have your back!”

Who’s Really Protecting The Integrity Of The Game?

In most states debating legal sports betting within their borders, much has been made of the so-called “integrity fee.”

Leagues claim that these fees are critical to ensure that bettors or bookmakers cannot affect game outcomes. To guarantee proper oversight, bookmakers would have to pay the leagues between 0.25 and one percent of their total betting handles.

The majority of states have rejected the concept. So far, that looks like the right call.

As these sorts of bookmaker refunds are happening on a regular basis, a different reality is emerging:

The sportsbooks, not the sports leagues, are the ones protecting the integrity of the game.

After all, leagues are largely their own arbiters when it comes to the purity of their products. Yet it is commonplace that blatantly wrong calls or misapplied rules affect game outcomes.

When they do, allegations of league directives, behind-the-scenes interference, and other shenanigans are never far behind.

And not just in the National Hockey League.

For its part, the NHL has at least publicly admitted their error. Further, the league has removed all four on-ice officials involved in the Game 3 non-call from the playoffs.

This is the second time the NHL has scrubbed an officiating crew from the 2019 postseason.

While such a response means that the NHL is taking issues of propriety and integrity to heart, sportsbooks acted faster and more transparently.

USAOnline Sportsbooks.com knows bettors want to know that the games they’re wagering on are fairly played and fairly administered. Integrity is a selling point, which is why sportsbooks are addressing controversy by rewarding affected bettors.

Who would have thought it would be the sportsbooks keeping the leagues honest?

Perhaps the leagues should pay the bookmakers an integrity fee.