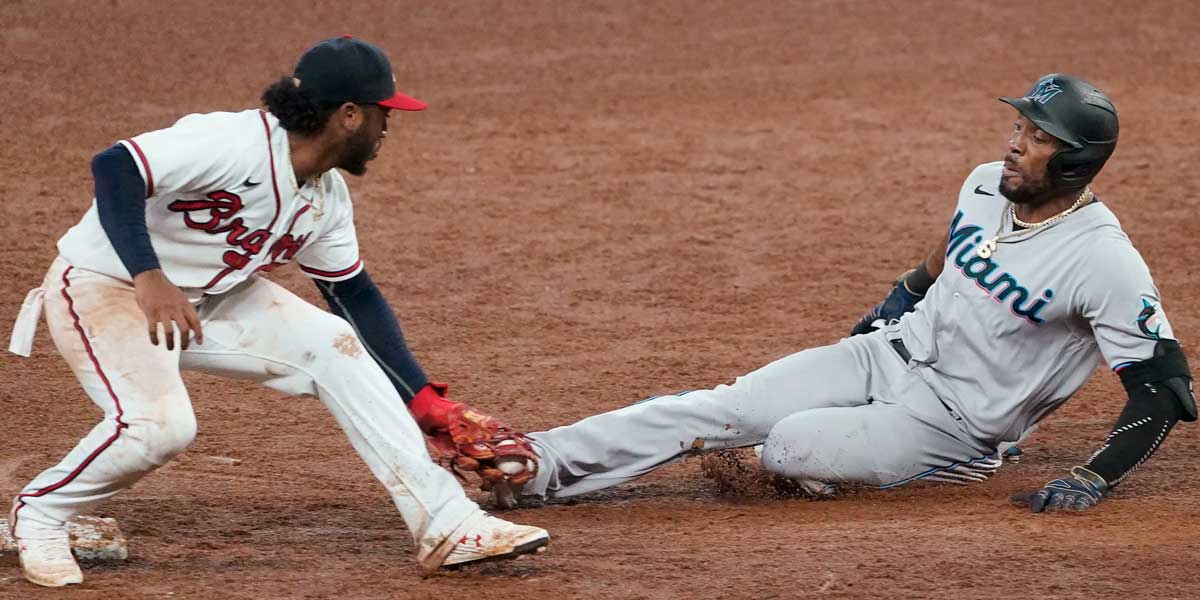 ARLINGTON, Texas – After a thrilling series of games through the brief Wild Card round, the NLDS is here and ready to get things started Tuesday.

The battle to reach the National League Championship Series will be contested between four bitter division rivals, who meet in the playoffs to decide their fate for the 2020 season.

The NL East Champion Atlanta Braves take on the upstart Miami Marlins, while the Los Angeles Dodgers face off against the explosive San Diego Padres.

All of the NLDS games will be held at a neutral site within a bubble due to the coronavirus. The Marlins and Braves will play at Minute Maid Park in Houston, while the Dodgers and Padres will play at Globe Life Field in Arlington.

The Dodgers enter the NLDS as the favorites to reach the world series for the third time in the last four years. The Braves are then slightly ahead of the Padres who far exceed the Marlins, who are the firm underdog according to the online sportsbooks.

Betting The Braves And The Marlins

The Braves will begin their series against the Marlins Tuesday afternoon, with ace lefty Max Fried facing off against Sandy Alcantara.

This series will be between two division rivals that are very familiar with each other, having played ten times over the 60 game season in 2020.

The Braves went 6-4 against the Marlins, leading to Atlanta coming in as the betting favorite for the overall series price.

For Game 1 on Tuesday, Atlanta gets a similar edge on the sportsbooks thanks to their favorable pitching matchup.

The Braves have been quietly dominating the NL East, winning their third straight division title this season. This fact has been lost on many fans and bettors due to the quick playoff exits that have befallen the Braves over the last two years. In positive news, the Braves did sweep the Cincinnati Reds in their division series, earning their first playoff series win since 2001.

The Marlins come into this series as the resident underdogs of the world, fresh off their firm sweep of the Chicago Cubs in the Wild Card Round. The Marlins have fully embraced their role as the “bottom feeders”, a name given to the team by the media when they were tied for the longest odds in the MLB to make the playoffs pre-season.

While the Marlins played great to take down the Cubs, they will have a harder task controlling the Braves lineup that was second in the MLB in runs per game at 5.22.

The best chance for the Marlins will be to extend this series as long as possible. Atlanta has one of the best bullpens in baseball, but only brings two steady starting pitchers into the playoffs in Fried and rookie Ian Anderson.

The season-ending injuries of ace Mike Soroka, Cole Hamels, Jacob Webb, and Jeremy Walker put Atlanta in a tough spot. Combine that with the departures of Julio Tehran and Dallas Keuchel to free agency, the collapse of Mike Foltezivcs, the revolving door to the minor leagues featuring names like Ynoa, Toussaint, and Sobotka, and new signing Felix Hernandez opting out of the season, and it is easy to see that the Braves have had a terrible run of bad luck.

While the Marlins should focus on winning each game at a time, their best chance is to push this game as long as possible. Things will get very interesting if they are able to force a Game 4 or 5.

Betting The Dodgers And The Padres

The nightcap and final Game 1 of the divisional round will feature the Los Angeles Dodgers against the San Diego Padres.

This series will take place at the new home of the Texas Rangers in Arlington, with no days off in between games.

The Dodgers come into this series as the heavy favorite to advance, with dreams of another World Series on the minds of everyone in the blue and white jerseys.

The Dodgers will send out stalwart Walker Buehler for Game 1 Tuesday, who will face off against one of the newest Padres in Mike Clevinger, who is just returning from injury after missing the Wild Card round.

The Dodgers face off against their NL West rivals in the playoffs after quickly disposing of the Milwaukee Brewers in the Wild Card round. The Dodgers are once again the complete package in terms of pitching and hitting, shown by their position atop the MLB futures odds to win the World Series.

The Padres had a losing record to the Dodgers over their ten regular-season meetings, going a respectable 4-6. In the first postseason meeting between the two franchises, San Diego will need to prove they are worthy of the “Slam Diego” moniker given to them during the regular season.

Fernando Tatis Jr. was one of the best players in 2020, followed closely by teammate Manny Manchado. The hard-hitting Padres earned tons of attention this season thanks to their bat-flipping antics that soured the faces of opposing pitchers as they watched the ball sail over the wall.

The Padres will certainly need to hit a couple of big ones if they hope to keep up with the Dodgers, who led the league in runs per game at 5.33. The San Diego bats will also have their hands full as they attempt to make contact against the Dodgers’ insane depth on the mound.

The Padres will have a tough go against Buehrer, only to wake up the next day and face Clayton Kershaw, who seems to have been born again in 2020.

San Diego has the potential to make some noise this postseason but will need to prove they have the fortitude and the maturity to beat an elite team like the Dodgers in the playoffs.