Skip to content
USA Online Sportsbooks | Sports Betting | No. 11 Michigan vs. No. 13 Wisconsin: Who Improves To 3-0? 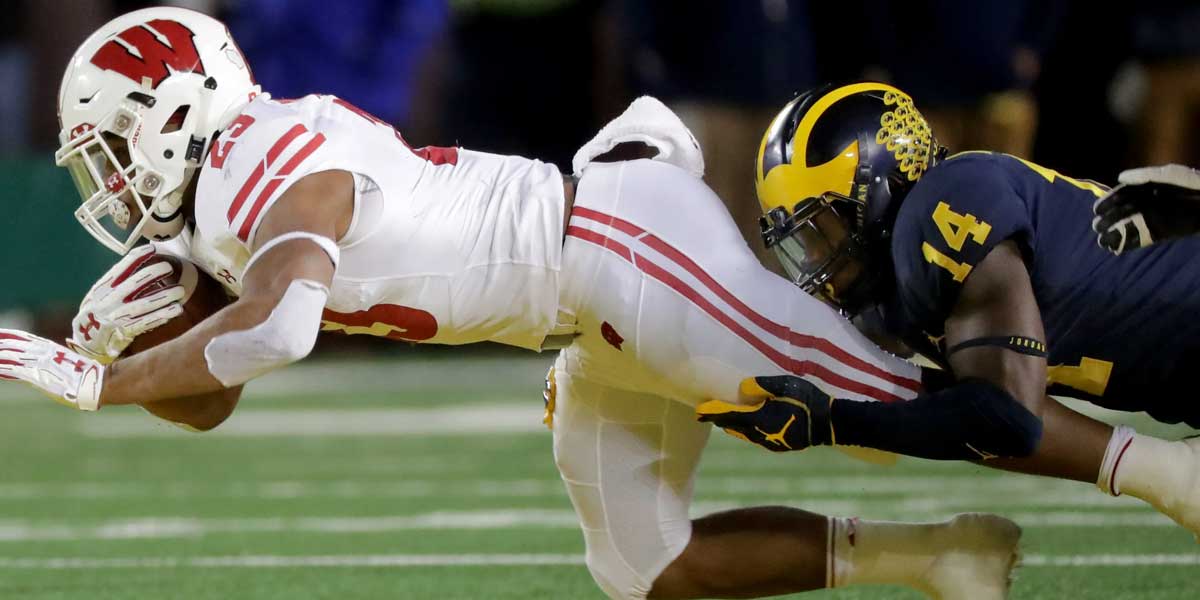 MADISON, Wisc. – Saturday in college football will feature perhaps the most anticipated game of the week when the Michigan Wolverines take on the Wisconsin Badgers in a BIG 10 showdown. Both programs boast an undefeated 2-0 record, but some will say Michigan took the road less traveled to get there.

A Must Win Game For Michigan

During the first two weeks of the season, Michigan took down the Middle Tennessee State Blue Raiders and also destroyed the second-longest win streak in college football by beating the Army Black Knights.

The Wolverines nearly lost the game against Army, barely managing a 24-21 win if it weren’t for a late fourth-quarter field goal. Before that, Michigan put up 40 points against Middle Tennessee but also gave up 21 to the Blue Raiders. A 19-point win should be celebrated in any game, yet the Wolverines managed to make the game seem too close.

This week, Michigan will travel to Badger country to play Wisconsin in a primetime conference matchup. If Jim Harbaugh wants any shot at winning the BIG 10 Championship game, it starts here.

The Wolverines come into Saturday’s game averaging roughly 233 rushing yards a game behind the play of the true freshman, Zach Charbonnet, who rushed for a clean 100 yards on 33 carries last week against Army. With starting quarterback, Shea Patterson, still playing through an oblique injury expect Charbonnet to continue to be Michigan’s bread and butter on offense.

Wisconsin Has The Hot Hand

Wisconsin, on the other hand, comes into Week 3 with a confidence that’s continuing to grow week by week. Led by dark horse Heisman candidate running back, Jonathan Taylor, Wisconsin steamrolled through both of its opponents in the first two weeks.

The Week 1 result? A 49-0 trouncing of the University of South Florida Bulls in Tampa. Week 2? Even better as they breezed through Central Michigan 61-0. When your point differential through just two weeks of football is 110-0, recognition typically follows.

Now, Wisconsin has a chance to take their high scoring offense and square off against a ranked opponent. The defense of Michigan is currently one of the biggest question marks for the team this season and the Badgers will surely look to capitalize on it.

Aside from the bell cow at the running back position, starting quarterback, Jack Coan, is no slouch either. Through two games, the junior quarterback has been deadly accurate, hitting over 76% of his 59 pass attempts thus far. He’s also thrown for over 550 passing yards and five touchdowns with no interceptions. The writing is seemingly on the wall for Wisconsin as they look to take down one of the many powerhouses in the BIG 10.

Wisconsin comes into this game looking like the better team just off paper alone. But dig a bit deeper and the match seems more contested than originally thought.

These teams have split the last 10 games against each other at five wins apiece. However, during that same stretch of games, Wisconsin has covered their spread in seven of the 10 matchups.

Granted the competition will stiff due to the nature of an inner conference matchup. Also, USAOnlineSportsbooks.com knows playing Wisconsin at home is almost a guaranteed loss nowadays, as the Badgers are 16-2 SU in their last 18 games in Madison. Simple prediction? Wisconsin gets the win.