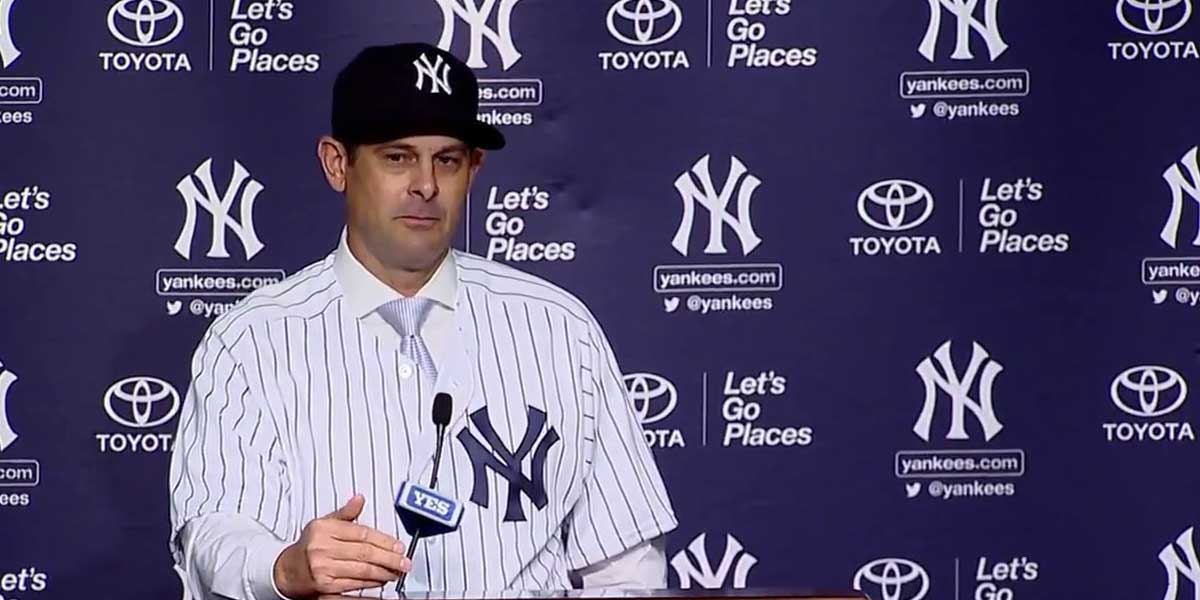 NEW YORK – Aaron Boone is currently in his fourth season as the manager of the New York Yankees. In his short time with the team, Boone has multiple 100+ win seasons and has yet to miss the postseason.

However, the disappointing start to the 2021 campaign has left many fans calling for Boone to be fired.

Boone on the Hot Seat

The New York Yankees have started the season with a 6-11 record which is tied for second-worst in the MLB. A Yankees team is always going to be pressured to win games, but especially when the team is loaded with this type of talent.

Fans have apparently seen enough to know that Aaron Boone is not the one they want leading the team. Despite the success in past seasons, the betting odds for Boone to be fired before the end of the regular season is set at just -200.

Normally, having a .615 winning percentage along with a 100% playoff appearance rate would keep your job secured, but the Yankees are not a normal team. Those looking to bet on a new manager taking over, might have history on their side.

Interestingly enough, Buck Showalter, who currently has +500 odds, took over after Stump Merrill. People betting based off this history should be aware that Merrill did finish the season as the manager, and therefore would’ve cashed if he was in Boone’s spot.

Showalter has been out of the game since the end of the 2018 season when the Orioles decided against bringing him back for another season with the team. Considering that Showalter is a notoriously mid-level manager (1551-1517 career record) it would be surprising to see the Yankees bring him in nearly 30 years after hiring him for his first MLB manager job.

Logistics Point Towards One Option

Listed with +500 betting odds at online sportsbooks, Phil Nevin seems to make the most sense of any candidate if Boone were to get fired before the season is over.

Nevin is currently the third base coach for the Yankees. When a coach is fired in the middle of a season, the team usually look to promote from within until the off-season. Plus, given that the Yankees manager job would be the most sought-after job in the coaching carousel, why wouldn’t the Yankees give themselves some extra time to find the right guy?

If Boone were to get fired, Nevin would make the most sense to take over as the interim manager and finish the season before interviewing for the full-time job after the year was over.

The Yankees haven't fired a manager in midseason since 1990 -- Bucky Dent. As @SlangsOnSports reports, only two teams have gone longer -- the Minnesota Twins (1986), and the San Francisco Giants (1985).

The Yankees are just 17 games into a long season with plenty of time to turn things around. The bats are quiet right now, but the bullpen has been one of the best in the league thus far. If the team can put it all together, the Yankees are a World Series caliber team. It’d be surprising to see the Yanks pull the plug on Boone despite the past success.