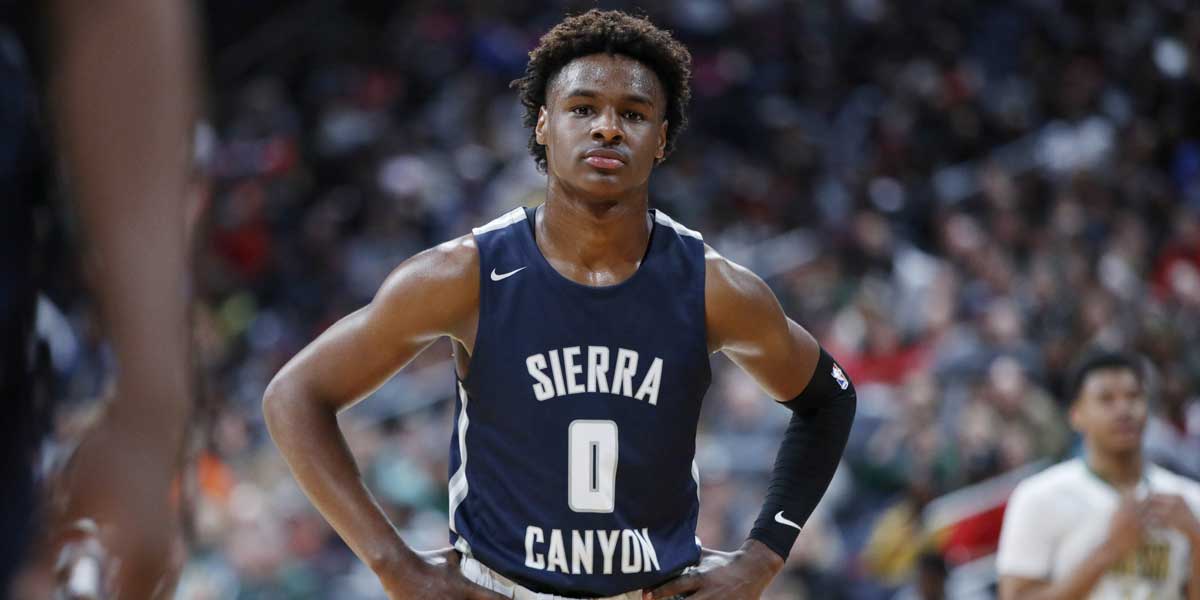 LOS ANGELES – Although he just recently finished his freshman year of high school at Sierra Canyon, the recruitment for Bronny James, the son of LeBron James, has already begun.

Online sportsbooks have weighed in on where they think Bronny James will end up going to college.

Due to the current nature of the country, sportsbooks have HBCU weighed in on their odds as well.

Where Will Bronny James Play His First NCAA Game?

James already has two confirmed offers on the table – one of them being from North Carolina Central and the other one being from Kentucky.

NC Central is currently the favorite as there is a growing trend of African American athletes making their ways to HBCU’s. Just recently, Makur Maker, a five-star prospect, chose Howard University which is an HBCU over schools like Kansas and Kentucky.

If the trend of recruits signing on with HBCU’s is still strong by the time Bronny James reaches college, betting on the NC Central Eagles to land Bronny James would not be a bad bet to make.

However, anyone that follows or bets on college basketball should know that Duke can never be counted of a recruiting race. Duke is second on the odds board with +125 odds for a reason.

They have been able to bring in a top-10 recruit in every recruitment class since 2013. Even 247-Sports Crystal Ball has Duke as the favorite to land Bronny James.

Where things get interesting here is the relationship the head coach of Duke, Coach K, has with LeBron James. That relationship could certainly play a role in Bronny James’ recruitment and bettors should feel comfortable placing a bet on Duke.

What About Kentucky Or UCLA?

As previously mentioned, Kentucky has already extended a scholarship offer for Bronny James to become a Wildcat. Like Duke, Kentucky cannot be counted out either as they are a hot spot for producing NBA talent.

Since 2018, there have been 30 members of a Kentucky team drafted or signed to an NBA team. They also had three first-round draft picks in the 2019 draft.

Kentucky currently does have a leg up on the competition as they have extended an offer which could be the deciding factor since they wasted no time in their offer.

Bettors should not count out the Wildcats despite their longshot +950 odds as if he does choose them, bettors could be in line for a huge payout.

The UCLA Bruins are currently as the back of the pack with +2000 odds of landing Bronny James. The fact that UCLA is last on the odds board should be not only concerning but it should also have bettors rushing to make their bets.

There are different factors that should be considered here. The first one is that James currently plays at Sierra Canyon which is just under an hour away from Los Angeles where LeBron James plays for the Lakers.

Granted, if LeBron James is still a member of the Lakers by the time Bronny makes his decision, fans and bettors can expect UCLA to be in the running.

Something else that could play a minor role would be that Bronny James has expressed that Russell Westbrook is his favorite player in the NBA. He even wears number zero on his jersey to represent that. Westbrook did attend UCLA as well and could be used in the Bruins recruitment pitch.

If bettors are looking to take a risk, this is definitely worth it as UCLA’s odds are just long enough to offer a colossal payout opportunity while still being possible.