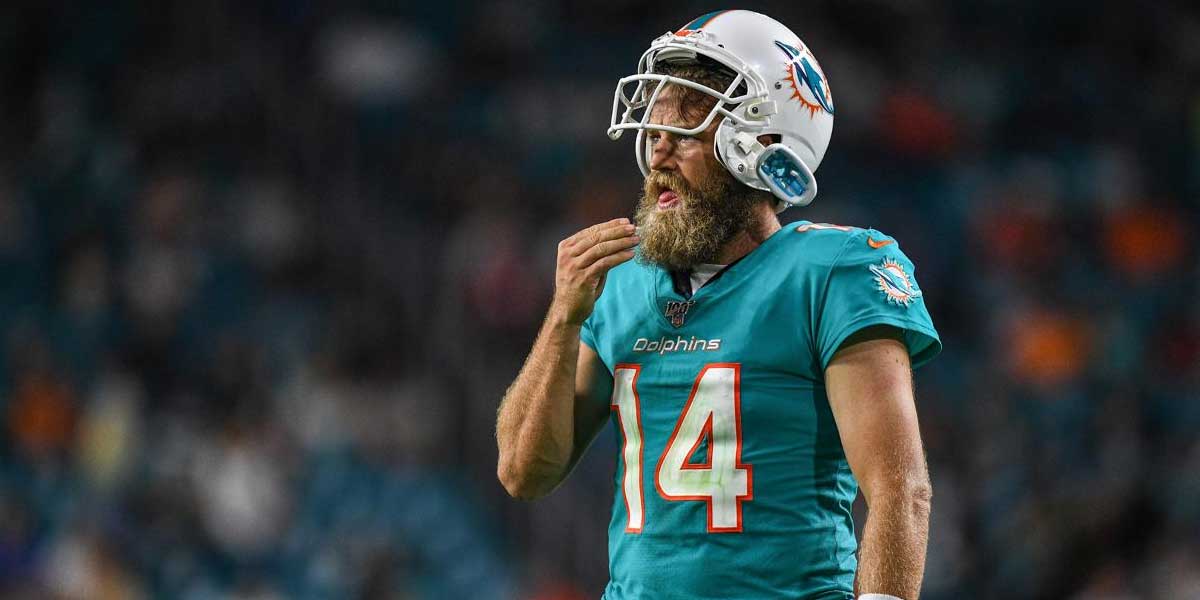 MIAMI – The Miami Dolphins are preparing to possibly go down as one of the worst teams in the history of the NFL. Sitting at 0-2 with some of the worst player and team stats to their name, the Dolphins also traded away one of their best younger players in Minkah Fitzpatrick on Monday.

The stats and “accomplishments” to start the season have been anything but pretty. The Phins have been outscored 102-10 in their two games – making them the team with the highest point differential after two games since 1961.

They had 38 total yards after three quarters of play against the New England Patriots and were shut out at Hard Rock Stadium for the first time in nine years.

Before the Patriots-Dolphins game began, the Dolphins closed as 18-point underdogs at the majority of sportsbooks (18.5 at some sportsbooks such as FanDuel). Bettors had no qualms against putting their money on the Patriots, as the Caesars took in almost 83% of the total money wagered on the side of the Patriots.

The Lines, They Are A-Changin'

Before the game closed at 18 points, it opened at -15 in favor of the Pats. This heavy line movement now looks minute next to the spread associated with the Dolphins upcoming game against the Dallas Cowboys.

Opening at +15.5 for the Dolphins, in two days the line has shifted to Miami +21.5. Three touchdown underdogs are extremely rare when it comes to betting on the NFL.

As far as futures go, the odds for the Miami Dolphins to make a run in the playoffs would make any bettor want to throw a tiny risk down. Still, with odds to win the AFC East (+50000) already as high as they are, the oddsmakers at USA online sportsbooks are seeming to end the Dolphins’ season now.

To win the AFC, the Dolphins (+50000) are the largest underdog in the league, and the Dolphins odds to win the Super Bowl (+100000) are four times that of the two closest teams’ (the Washington Redskins and Cincinnati Bengals).

Is It Worth Betting On The Dolphins?

But now the real question enters the minds of degenerate and interested gamblers alike. Are the Dolphins worth betting on? In short, good luck finding a sportsbook that offers a moneyline on a 21-point spread.

However, assuming a bettor could get action on every game at odds higher than +1400, betting on the Dolphins would be worth the risk. Even risking $1 every game (to win $14), a bettor could lose along with the Dolphins every game except the Week 17 game. At this rate, the bettor would have lost $13 going into the matchup with the ability to cover their losses (and make a unit) correctly hitting the last week’s action for $14, plus their last wager of $1.

However, this long-term play is not advised, as bettors could also entertain the idea of betting on the Dolphins to go 0-16 on the season.

Choosing “yes” (+500) on the Dolphins to lose every game may be worth the risk, as the last two teams to have fully defeated teams include the 2017 Cleveland Browns and the 2008 Detroit Lions.

If locking up the risk for the entire season isn’t in the bettor’s wheelhouse, they might also consider betting on the Dolphins with the points every week.

Despite losing every game, even the aforementioned 0-16 teams fared pretty decently against the spread. For the Browns, they were 4-12 ATS while the Lions were 6-9-1 ATS.

However, as historical trends will point out, betting on the Dolphins with the points may not be too lucrative this year. Miami is 0-5 ATS in their last five games, but bettors may look instead to betting on the over every week.

Because their defense is that bad, expect teams to put up loads of points against the Phins, who have seen the over hit in four of their last six games. No matter how you look at it, betting options on the Dolphins still exist – you just have to find them.