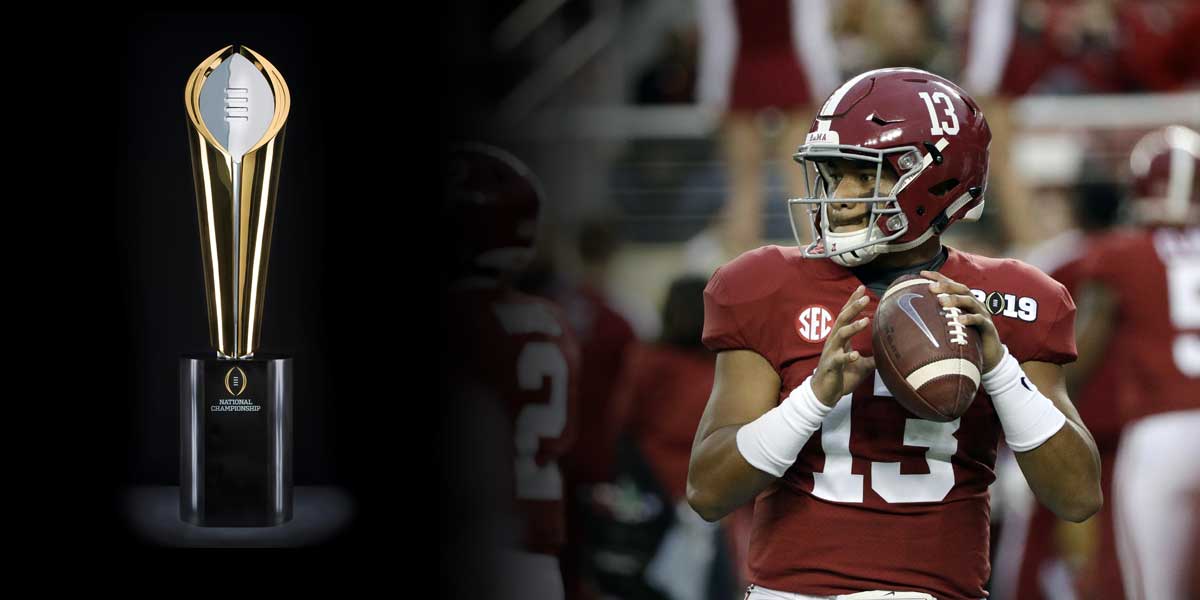 Tallahassee, Fla. – Monday will mark the start of the 2-month countdown until the college football season begins.

Though the action is still over 60 days away, it is never too early to start your college football betting action.

The Clemson Tigers took care of business last season, cruising past the Alabama Crimson Tide 44-16. With this, it is no surprise that these two teams lead all universities in the odds to win the 2020 National Championship.

However, picking the favorite isn’t always the best situation – though a selection on either Alabama or Clemson is definitely a wise one. Finding the best odds at the right moment mean a lot more than blindly taking a chance on what is presented.

Teams To Bet On To Win The College Football Championship

As stated above, a wager on Alabama or Clemson is definitely a smart play, as these teams have accounted for seven of the combined eight championship berths since 2016. Having met in the College Football Playoff National Championship three times since, Clemson has come out victorious in two of these instances.

Both of these teams have a Heisman frontrunner as QB – Alabama’s Tua Tagovailoa (+260) and Clemson’s Trevor Lawrence (+325) – and also possess the coaching and defense needed to make it to the next level.

As a top-5 candidate to win the championship next year, according to oddsmakers, Oklahoma will be presented with the new addition of QB Jalen Hurts. Hurts is the third-favorite to win the Heisman (+800) but will have to learn an entirely new system of play that has proven to be successful under Coach Lincoln Riley.

Regardless, when Oklahoma plays at home, they are almost guaranteed a win, having gone 17-2 in the past 3 seasons under Riley. With a schedule like theirs and only Texas to challenge them in the Big 12 Conference, Oklahoma could find themselves on the inside of the College Football Playoffs looking out – just like last year.

The Jim Harbaugh years have been less exciting than anticipated for the Wolverines. However, they were able to finish tied for the best conference record in the Big Ten for the first time since 2004. Penn State and Ohio State have the potential to be Michigan’s spoiler (again), but things have finally started to look good the college in Ann Arbor.

Michigan spent five straight weeks within the AP top-5 last year near the conclusion of the season and will look to continue the trend. They lost running back Shea Patterson to the NFL, but are expecting big things out of wide receivers Donovan Peoples-Jones and Nico Collins this year.

Why Are Odds Different Amongst Sportsbooks?

One of the most important aspects of offshore sports betting is shopping lines. While the odds listed above were taken directly from Bovada, this does not mean this is your only option. When reviewing other legal online sportsbooks, some (such as SportsBetting) have Clemson (+200) favored over Alabama (+225).

While this difference seems small, finding the best payouts over time can allow for a much higher revenue stream than taking action on the first odds you see.

Take Utah for example – a top-15 contender according to oddsmakers at Bovada. When looking at odds at SportsBetting, we see the odds are almost doubled (+10000) compared to the former site.

USAOnlineSportsbooks.com knows finding these differences amongst many platforms make taking action on certain teams much more valuable, so always be sure to shop lines beforehand.