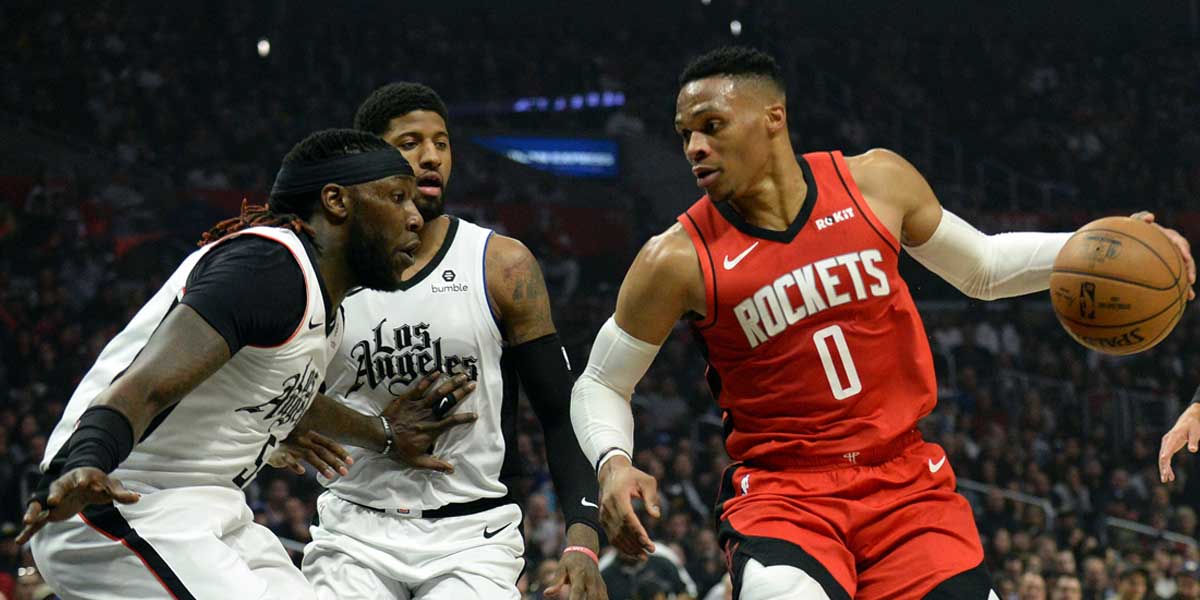 HOUSTON —The Rockets and Clippers will face off tonight in Houston in what is surprisingly an even matchup according to online sportsbooks. Both superstar duos on each team have been living up to their potential this season.

The Rockets will need to find ways to be active in rebounding as they are struggling in that category. This matchup could be a tough one for them on the rebounding side of things.

As the game is tipping off tonight, the NBA odds for this game are even. The Over/Under for total points in the game is 236. The total points for both the Rockets and Clippers are even as well at 118 with -115 odds. This is a little surprising as the Clippers have a much deeper and bigger team than Houston.

The Clippers definitely have a height advantage in this one as the Rockets have opted to go with a small ball rotation. Not to downplay Houston’s decision for a smaller lineup, but it will more than likely not work tonight against the Clippers as they have a lot of guys that can rebound the ball at a high level.

The Clips have had a stellar season so far as they are back to being a powerhouse team in the league. Kawhi Leonard is playing at an MVP level, as usual, averaging 27 ppg, 7.5 rpg, 5.1 apg and 1.8 steals. The supporting cast on this team has been playing at an elite level as well.

Patrick Beverly has been one of the most physical and scrappy players in the league. Lou Williams is bound to win the sixth man of the year with 19.1 ppg and 5.8 apg off the bench along with Montrezl Harrel averaging 18.7 ppg and 7.1 rpg off the bench as well. Ivica Zubac has been supplying quality minutes in the starting role too.

Not to mention, this team recently added Marcus Morris and Reggie Jackson. Jackson, who was acquired from the Pistons, has been having a decent year with 13.2 ppg and 4.8 rpg and will put this team over the top in depth at the point guard position.

Morris, on the other hand, has been inserted right into the starting lineup as he was having a breakout season before joining the Clippers with 18 ppg.

The only “negative” on this team right now has been the play of Paul George. Offensively, George has been struggling as in the month of February as he only put up 16.3 ppg. He is, however, starting to get back on track in March as he is averaging 20 ppg.

Thankfully for the Clippers, they have been able to still play at an elite level despite the unusual struggle from Playoff P. Look for the Clippers to be extremely active on the glass tonight as they are poised to have a big rebounding game as a team and walk away with the victory.

Bettors should be comfortable betting on the Clipper despite the even spread and this game being a pick’em.

For daily fantasy players, look to add any of the Clippers big men as they are expected to have big rebounding games.

The Rockets have had a good, not great season. They are currently fourth in the Western Conference and only 2.5 games behind the Clippers. They have made one of the most questionable moves this season after trading away the only center on the team in Clint Capela.

The Capela Trade leaves them at a disadvantage against any team but especially the Clippers. They are forced to start a 6’5 PJ Tucker at center who is averaging 6.9 rpg. Look for Tucker to be a zero factor on the glass and defensive side in this game as he is matched up against Zubac and Harrel who should easily drain his energy under the basket.

In addition to not having a true center, the Rockets are not a deep team at all as the bulk of the bench minutes are spread out only amongst Austin Rivers, Ben McLemore and Jeff Green who serves as their backup big.

On the bright side, Russell Westbrook and James Harden are having their usual MVP caliber seasons as both of them flirt with a triple-double on a nightly basis. The Beard averages 34.9 ppg, 6.3 rpg and 7.4 apg while Brodie averages 27.5 ppg, 7.9 rpg and 7.1 apg.

A lot of fans harshly underestimated the superstar duo prior to the season starting since both of them are ball-dominant guards. That hasn’t been the case as they have been feeding off of each other quite well.

Bettors should stay away from betting on the Rockets in this one as it is looking to be a lopsided game in the rebounding column. As for daily fantasy players, with the exception of Westbrook and Harden, stay clear of any other player on the Rockets roster.