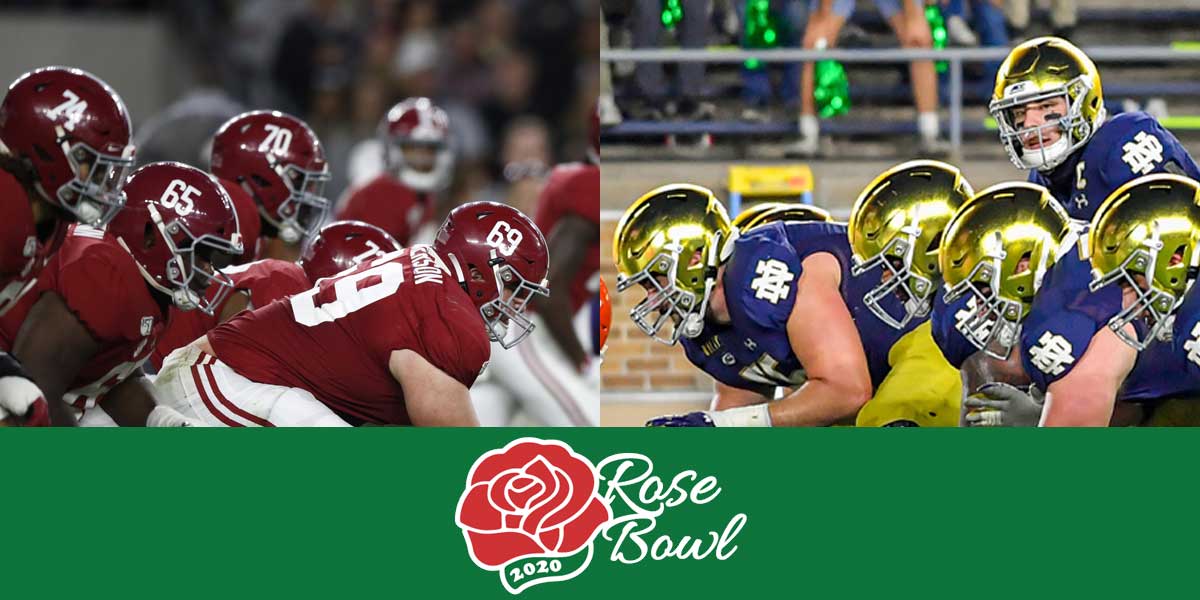 DALLAS — The College Football Playoffs start with a semifinals match between the #1 Alabama Crimson Tide and the #4 Notre Dame Fighting Irish in the Rose Bowl with a spot in the National Championship game on the line.

The Notre Dame Fighting Irish were the controversial last team selected to be in the College Football Playoff and have an uphill battle of justifying their selection to the Final Four following their loss to the Clemson Tigers in the ACC Championship game.

The Rose Bowl will not be played in Pasadena, California for the first time since 1942. This is due to the state of California’s ongoing Covid-19 outbreak in Los Angeles and the surrounding areas the game was moved to AT&T Stadium in Texas.

The location change of the Rose Bowl hasn’t had any effect on the betting odds as the Crimson Tide are still heavily favored to beat the Fighting Irish.

The Alabama Crimson Tide are 8-3 ATS this season and before the SEC Championship game had covered the spread in their last seven games.

The Crimson Tide offense, led by Heisman finalist Mac Jones, has put up at least 50 points in the team’s last three games. In the eight games where Alabama is favored by more than 20 points, they are 6-2 ATS this season.

For the CFB betting trends regarding the Fighting Irish, they haven’t been very successful going 5-6 ATS on the year. The Crimson Tide will be the toughest challenge the Fighting Irish will have faced all season and if Notre Dame’s latest game showed anything about the team is that they will have trouble stopping the Alabama offense.

If looking to place a moneyline bet on the Rose Bowl the Crimson Tide’s -1300 odds at Bovada should be avoided. If wanting to bank on an upset the Fighting Irish’s +725 odds would provide a generous return and are the only SU odds that should be taken.

The Crimson Tide’s potent offense and stingy defense should be able to stifle the Notre Dame offense much like Clemson did in the ACC Championship. Despite Notre Dame not being able to score much in this game Alabama’s offense will do most of the scoring and the 65.5-point total going over is a strong play for this matchup.

The Alabama Crimson Tide defense has scored the most touchdowns in the NCAA with four. Alabama has returned one fumble and three interceptions for a touchdown this season.

Notre Dame has done a pretty good job of protecting the ball as the team only has two interceptions and eight fumbles lost on the season. Still, the opportunity for a defensive or special teams TD will be there for both teams but expect the Crimson Tide to make this game prop a winner in the College Football Playoff.