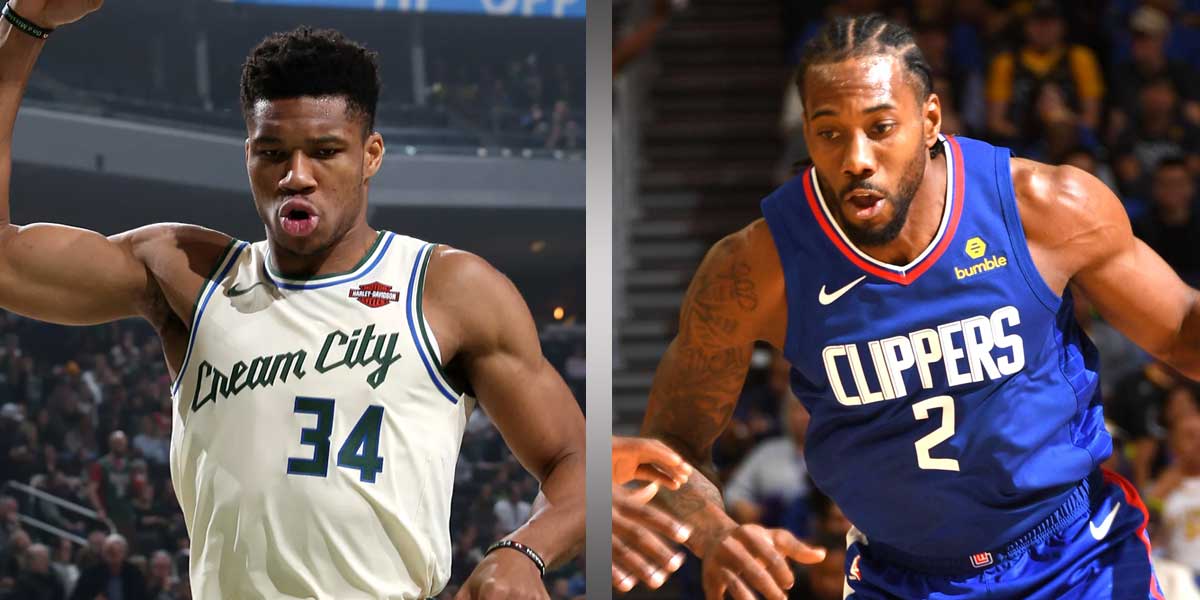 MILWAUKEE – The Milwaukee Bucks and Los Angeles Clippers are set to tip-off at 8:30 p.m. EST. Furthermore, there will be a rematch that many fans have been waiting to see since last year’s NBA playoffs. The rematch between Kawhi Leonard and Giannis Antetokounmpo.

The last time these two played against each other was during the 2019 Eastern Conference Finals to be exact. That series went to six games. The Bucks won the first two games, but Raptors charged back with four straight victories.

Tonight’s game seems to be very similar as Leonard brings his new cast to Milwaukee to face Antetokounmpo and the Bucks. US sportsbooks have a few betting odds on this game that look intriguing.

With the over/under set at 233 points, the under seems enticing. The Bucks are coming into the game ranked top five in the NBA on defense. With the Bucks averaging six steals and 41 rebounds per game, this defense is protecting the rim.

Milwaukee is also averaging the most defensive rebounds per game, so it’s hard to get second-chance points against this team. Look for that to give the Clippers offense problems.

The Clippers also have a top-five defense that includes Leonard and Paul George. Both of them moved to Los Angeles over the offseason and that has helped defensive studs such as Patrick Beverley and Montrezl Harrell out.

With Leonard leading the team in steals per game and Harrell grabbing everything off the glass, their defense has played well. Betting under a total of 233 points seems to be more beneficial.

The reigning MVP is leading the team in points and rebounds per game. At this moment he is averaging more points per game than he was last season. There is nothing that Antetokounmpo can’t do.

Although he is known for his point-scoring ability, the possibility of him getting more than seven assists (+162) seems to be very achievable. Being matched up with a defensive stud like Leonard will force him to get his other players involved.

It is not only Antetokounmpo’s offense that teams have to worry about. It's also his defense that is causing problems which is one of the main reasons why this Bucks team is ranked in the top five in terms of total defense. Seeing as how he will be playing all positions on the court, getting three blocks (+295) can very well be done on Friday.

Leonard plays when he wants to. It seems as if he only plays when the team needs him. This is one of those games where he can put a stamp on it letting the world watch him dominate. Averaging 25 points per game, his game is very smooth. He lets the game come to him and only takes over when needed. This is a game will he will have to make an impact so Leonard getting 28 points tonight(+110) will not be a problem

Most Points: Leonard Or Antetokounmpo?

With both of these guys averaging around the same numbers, both can explode at any time of the game. Once either Leonard or Antetokounmpo gets started, lookout. With Leonard leading the team in points per game, he still has George who can catch the hot hand from three-point land.

The Clippers have plenty of offensive weapons to take shots so Antetokounmpo (-385) having more total points than Leonard is highly expected.

This matchup could be one we see in the 2020 NBA Finals. Both teams are deep and geared for big playoff runs. With the Bucks, their strength is their guards. They even have a three-point king in Kyle Korver on the bench who can catch fire at any time.

The Clippers have a team built to stop anyone. Their defense is aggressive starting with Beverley who can guard just about any player. George is also a defensive player who can affect a team’s offense. With those two along with Harrell and Lou Williams coming off the bench, this Clippers team can control the pace of any game.

The Bucks (-160) are favored to beat the Clippers (+140), so this game will be one to watch. The Clippers will not go away easily. With Bucks having the home-court advantage, Antetokounmpo may get his revenge against Leonard.