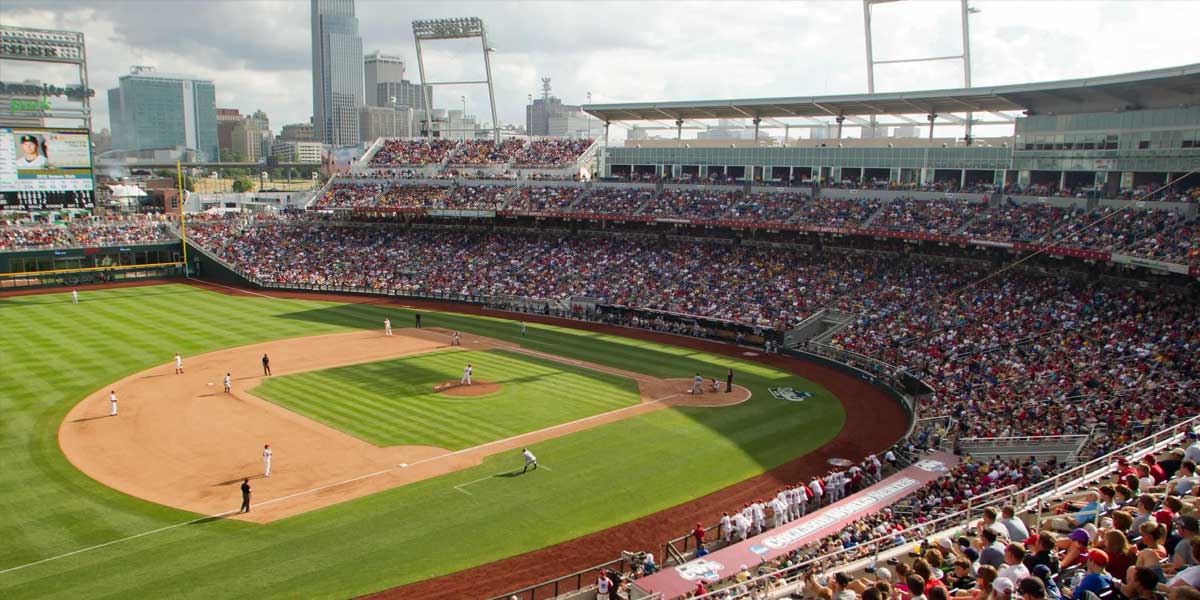 OMAHA, Neb. – The bracket has been finalized for the 2019 College World Series, as only eight teams remain.

With legal sports betting operating in eight states and another near-dozen finalizing regulations or prepping their launch, the focus turns to the odds boards more than ever.

Arkansas is co-favorite to secure the trophy at the end of games along with SEC rival Vanderbilt. Other SEC teams include the third-favorite Mississippi State and their first-round opponent, Auburn.

For the non-SEC schools, Louisville and Florida State are representing the ACC, while Texas Tech (Big 12) and Michigan (Big 10) round out the field.

Which School Will Win The 2019 College World Series?

Arkansas (+300) was the runner-up of the CWS last year, after winning Game 1 but losing the next two. The Razorbacks won the Regions and Super Regionals in their hometown and won’t have to travel far north to Omaha. They took care of business in the last round, beating Ole Miss 11-2 and 14-1 in two of their three games played, as their offense can certainly turn it on at any moment. Every player crossed home-plate in their last game against Ole Miss and four starters are hitting over .400.

Florida State (+1000) will challenge the Razorbacks in their first game. This team has been one of the hottest teams of late, winning 22 of their last 30 games, including six in a row. Soon-to-be-retired coach Mike Martin was given the Coach of the Year honors, as he attempts to gain his first CWS Championship finishing season number 40.

Texas Tech (+800) has been amazing all season, winning 44 games but with 30 of them coming at home. They were just shy of winning the Big 12 Championship, losing to West Virginia, but breezed through their Regional. For the Super Regional, they won in close bouts with Oklahoma State, as they advanced to the CWS. The Red Raiders are just 4-4 on neutral sites but with homerun hitters like Josh Jung and Cameron Warren, anything is possible.

Michigan (+1500) come into the tournament as the biggest longshot and face Texas Tech in their first game. Pitching will be the focal point, as both Tommy Henry (117) and Karl Kauffman (101) finished with over 100 strikeouts on the year. Of Bracket 1, only FSU can say the same; however, Henry (3.54) and Kauffmann (2.59) finished with much better ERAs than the Seminoles’ pitchers.

Vanderbilt (+300) may be the most balanced team in the CWS, as their pitching is very balanced with their hitting capabilities. With three two pitchers with 100+ strikeouts, two with ERAs under 2.85 and, and three with 10+ wins, they are a handful to deal with. On the offensive end, JJ Bleday and Austin Martin can create many scoring opportunities for the Commodores.

Louisville (+800) will challenge Vanderbilt in their first game and look to continue off of their recent success. The Cardinals have won five in a row, only dropping one game since the Regional started. While this team can score at will, they are quite streaky in some games. Regardless, they won their Super Regional against East Carolina in two games by a combined score of 26-1. The success of this team in the CWS all lays in the hands of Pitcher Reid Detmers.

Mississippi State (+350) will rely on pitching just as much as Vanderbilt and Michigan. Ethan Small will be the ace on the mound for the Bulldogs. This team comes into the CWS winning 20 of their last 24 since their 0-3 series against Arkansas in late April. They are on a five-game win streak and will look to continue that winning mentality going into their game again Auburn.

Auburn (+1000) doesn’t pose a threat to other teams when you look at them at the statistical level. No pitcher earned more than 7 wins, one pitcher hit the 100-mark for strikeouts, no player hit double-digit home runs, and no player batted over .350. However, USAOnlineSportsbooks.com senses that like their basketball team this year, sometimes the magic is in the air and that is all it takes to make a run.

All games on ESPN
*If necessary
**on ESPN2