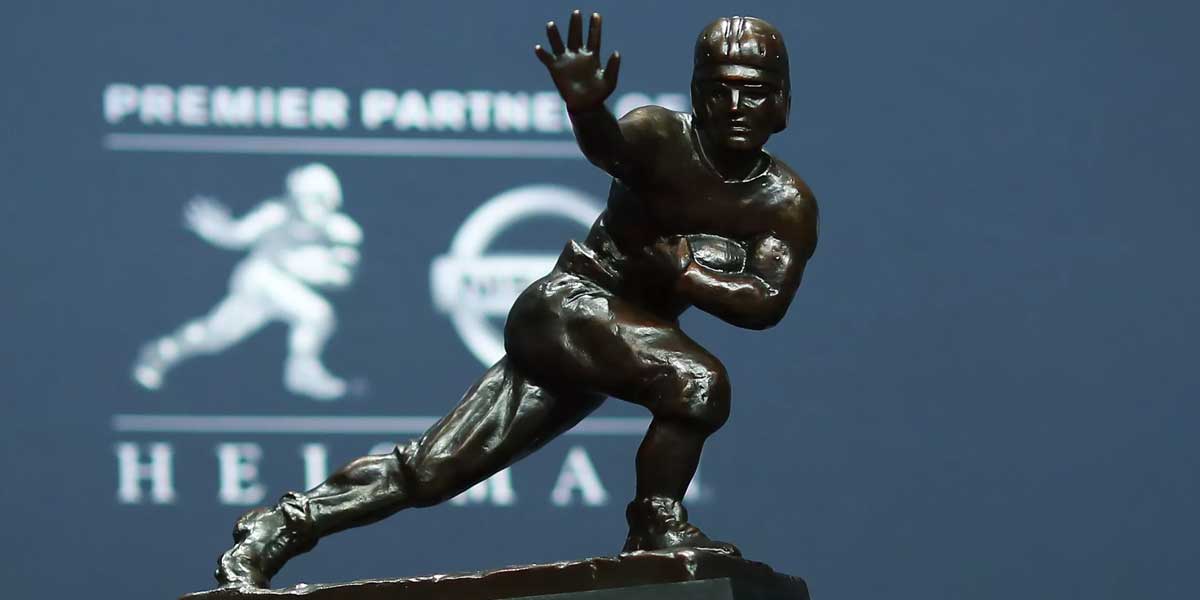 NEW YORK – College football’s most prestigious award will be handed to the best player in college football on Saturday. The Heisman finalists have been announced for this Saturday’s ceremony. Great players have received this award since it was established in 1932.

This weekend, either  Joe Burrow, Jalen Hurts, Justin Fields, or Chase Young will join them. While all of them have had impressive seasons, US Sportsbooks have their own idea as to who is favored to take home the trophy.

The Ohio State Buckeye quarterback is having a season that reminds fans of their other Heisman quarterback winner Troy Smith. Similar to Smith, Fields has thrown for over 2,500 yards on the season. Fields is also giving his team a chance to win a national title just like Smith did.

The biggest question is, can Fields get similar results as Smith as a Heisman Trophy candidate? Smith easily won the trophy. Even with regular-season numbers similar to Smith’s, Fields (+3300) is an underdog to win the award.

The last defensive player to win the Heisman was Charles Woodson when he famously upset Peyton Manning for the award. Young joins Fields as the two teammates that made it as Heisman finalists.

His number speak for themselves as he has 16.5 sacks on the season and 6 forced fumbles. These numbers are similar to another former defensive Heisman finalist, Ndamukong Suh. Suh, who finished fourth in the Heisman voting, had 12.5 sacks his final year at Nebraska.

Chase Young is making a huge impact on this Buckeye defense just as Suh did for his team. Along with the college football playoffs coming up for Young, he could possibly be going to the NFL draft with a lot of hardware, including the Heisman Trophy.

Chase Young's odds to win the Heisman (+3300) are the same as his teammate, Justin Feilds.

For the fourth year in a row, an Oklahoma quarterback has been named a Heisman finalist. Right now, Oklahoma seems to be the quarterback factory and they are producing amazing talent at that position.

Hurts is another quarterback who transferred schools and is putting up massive numbers. Hurts has thrown for over 3,500 yards and rushed for over 1,500 yards.

This dual-threat quarterback has also led two different teams to the college football playoffs. Formerly playing for the Alabama Crimson Tide, Hurts is the only player in history to play in the College Football Playoffs under two different teams. Yes, he is that good.

Look for him to possibly bring home the Heisman Trophy which would make it three in a row for the Oklahoma Sooners’ quarterbacks.

In 1959, Billy Cannon became the first and only LSU player to win the Heisman. With Burrow (-30,000) being the clear favorite this year, Cannon may finally have some company in the Heisman room with another LSU Tiger.

Burrow has this LSU team undefeated and breaking records. This offense hasn't been stopped this season and it's mainly because of Burrow. With so much on the line, Burrow brought this LSU team into Tuscaloosa and took down the Alabama Crimson Tide.

Known as one of the biggest rivalry games in the sport, leading the Tigers to victory helped Heisman voters focus on Burrow.

With National Championship hopes and a Heisman in the bag, Burrow may be the first player to go number one in the NFL Draft, win the Heisman, and win an NCAA Title since Jameis Winston in 2013.

With Burrow being a huge favorite, bettors would have to put a lot on the line to win so little. A bet of $330 on Burrow winning the trophy would only earn $10 if he does, in fact, hoist the trophy.

There is always a chance for an upset because that is the nature of sports. If that were to happen and one of the other finalists walk away with the trophy, that would definitely be a story worth reading.