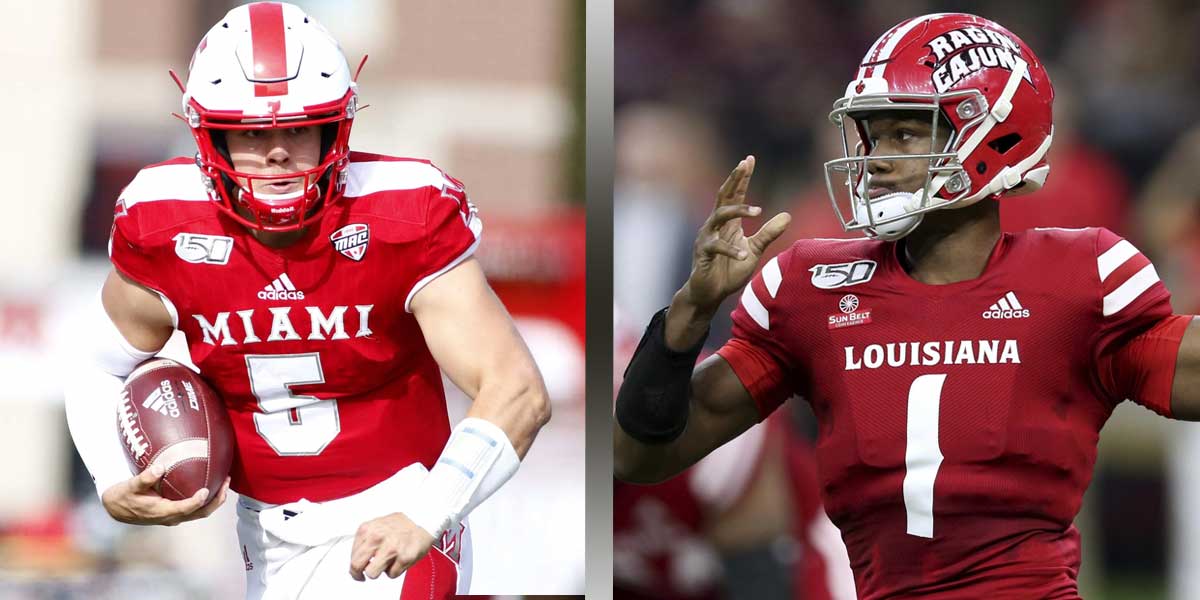 MOBILE, Ala. – The final bowl game of the college football postseason is here, and it is a great one for sports bettors. Users of USA online sportsbooks would be well advised to get their college football fix one last time before the College Football Playoff Championship game ends the season on Jan. 13, 2020.

The Lending Tree Bowl pits Louisiana Lafayette against Miami (Ohio), in a cross-conference matchup, with Louisiana residing in the Sun Belt conference and Miami in the MAC. The last college football bowl game should attract the eyes of many a fan, with the nation in need of college football.

Let’s jump right into the game:

Lousiana enters the game as a significant 14 point favorite. The line has remained relatively stable, opening at 14 or 13.5 at most sportsbooks, and stabilizing at 14. The Over/Under is set at 55 as of now on average, and opened only slightly higher, at 55.5. Different odds may be seen when sports bettors shop lines.

Their other loss was to Mississippi State, in the season opener, 38-28. In other words, while this team has lost to the best teams on its schedule, it has beaten everyone else, and their losses were competitive games.

The Ragin’ Cajuns have stellar statistics, but their strength of schedule must be taken into account. They have the 10th best offense in the nation by points per game and the 20th best defense by points allowed per game. However, they have the 94th hardest schedule out of the 130 Division I teams.

Louisiana Lafayette will likely have the best player on the field in Kevin Dotson, who was one of two offensive All-American players not from a Power 5 Conference. Dotson is a senior offensive lineman who really came into his own this year, perhaps even vaulting himself into being an NFL prospect.

Dotson’s skill has helped protect quarterback Levi Lewis as he passed for 2804 yards with a 24-5 touchdown-to-interception ratio. Similarly, running back Elijah Mitchell has excelled, with 1162 yards from scrimmage, the vast majority of those being on the ground, and an average of 5.8 yards per carry.

Representing the MAC, Miami enters this game looking to upset the Ragin’ Cajuns. Their work does appear to be cut out for them, as their play this year has been up and down. They’re 97th out of 130 in points scored per game and 71st out of 130 in points allowed – below-average numbers in both categories.

It’s not like they had a tough schedule, either. Miami played the 88th hardest schedule out of 130, by strength of schedule metrics. They have a lot of work to do in order to compete with Louisiana in this game. However, for sports bettors, the question isn’t whether they’ll compete, its whether they’ll cover the fairly large spread.

On the field, Miami is led by quarterback Brett Gabbert, who put up over 2000 yards, but only scored 11 touchdowns, and threw eight interceptions to boot. Gabbert, the younger brother of NFL quarterback Blaine Gabbert, is a true freshman so these growing pains are to be expected and his production at his age is worth celebrating. Gabbert has a ways to go, but coaches are effusive about his talent and Miami will need him to come through in this game.

Perhaps the true stars of Miami’s offense are the running backs, Jaylon Bester and Tyre Shelton, who combined for 1217 yards on the ground and fourteen touchdowns. Their production, yards wise, is relatively evenly split but Bester has demonstrated a nose for the end zone, contributing 12 of those fourteen touchdowns, but only 689 of the yards.

With regards to the spread, there are some conflicting trends to be aware of when it comes to Miami. They are 4-0 ATS in their last four neutral site games and have been underdogs in all four of those games. They are 5-2 ATS in their last seven games as a whole. However, when they leave the conference, those numbers drop precipitously- they are 2-10 in their last 12 non-conference games.