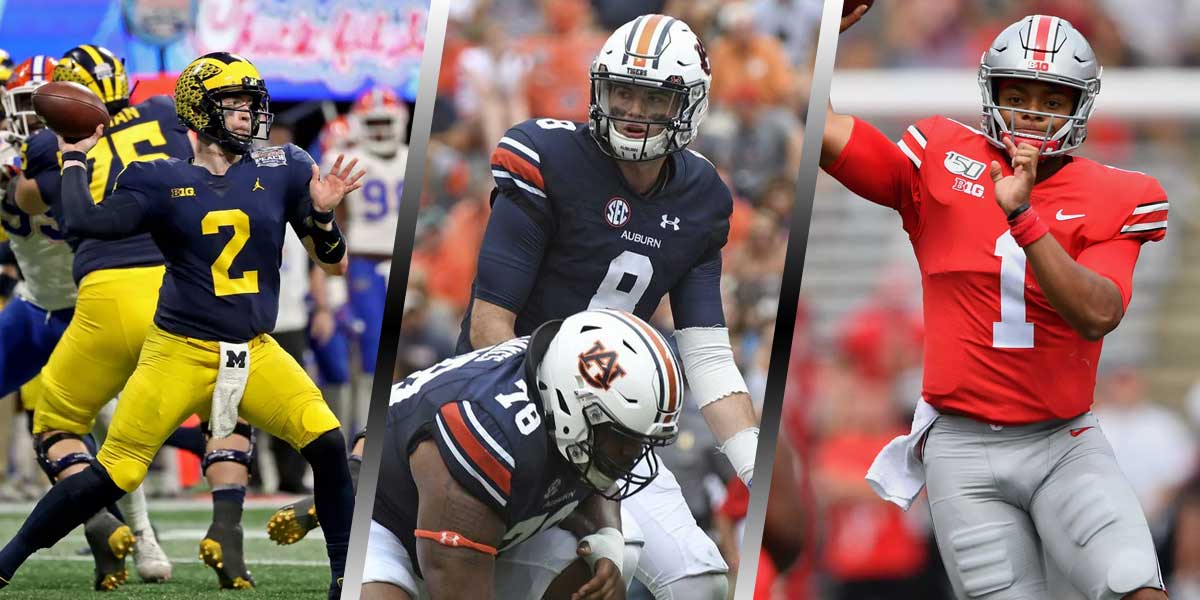 The slate of games is sure to be exciting from start to finish, as each of these three top-25 matchups kicks off at different times. This gives bettors the opportunity to live bet even more action on college football, as well as play the pregame betting lines.

At noon EST, the #14 Iowa Hawkeyes travel to Ann Arbor to take on #19 Michigan Wolverines. When this game ends, the following 3:30 p.m. EST game will feature an SEC battle between the #7 Auburn Tigers and the #10 Florida Gators. To close the week, the #25 Michigan State Spartans face the #4 Ohio State Buckeyes, which kicks off at 7 p.m. EST.

Through injury news and other last-minute changes, all three of these lines have moved immensely. Those who bet on college football when the lines were first posted will see much more (or much less) favorable odds than where they currently sit.

This Big Ten matchup opened at -13 in favor of the Wolverines. Since the beginning of the week, the line has shifted close to a balanced matchup, where the Hawkeyes (+3.5) are only slight underdogs.

Michigan has not fared well against the spread (ATS) so far this year. Sitting at 1-3 ATS, Iowa is ready to take advantage of the high expectations always set for Michigan.

The last time these two teams played was at the end of the 2016 season, but Iowa came away with a tight 14-13 victory after being labeled a 24-point underdog in the contest.

The respect has risen on Iowa, who holds the ball longer than all but four teams in the NCAA. With an average time of possession of 36:11 per game, Michigan’s defense will need to do everything in their power to get the Hawkeyes off the field.

As far as the betting trends go, all signs point to taking the Over (47.5) and taking Iowa with the points.

The over has hit in two-thirds of the last 15 games Iowa has played, and Michigan has seen the same result in five of their last six. Though the last contest between these two was a low scoring affair, nothing indicates that the noon game won’t be a shootout.

Looking at the spread, not only is Iowa 7-0 in their last seven games straight up but they are also 5-1 straight up in the last six games played against Michigan (going 4-2 ATS in those games).

As for Michigan, they haven’t lost at home in over 10 games, but against the spread, the Wolverines are 1-7 in their last eight.

The game can be viewed on FOX.

In this battle of the undefeated SEC teams, the Gators will play host against the Tigers.

These two teams haven’t played against each other since 2011, so any trend regarding this matchup is rather pointless. Still, Auburn is 5-0 ATS in the last five games played against UF, having won four of them.

The more important college football betting trend to note is that Florida has only covered the spread one time in their last five games when playing an SEC opponent.

This line opened at 7.5 points in favor of the Tigers, but oddsmakers have had to post different lines with all of the action this has seen. The Tigers (-2.5) are still the favorite but now are only projected to win by a field goal.

Auburn (-145) is 5-0 against the spread this year, making them an easy choice is this battle. Without quarterback Feleipe Franks at the helm for the Gators (+125), they would increase their ATS record on the year to 2-3-1 with a loss on Saturday.

As for the point total for the Auburn-Florida games (48.5), the under seems to be the hot selection. Florida has hit the under in all three home games played this year, and with the defensive abilities of both teams, scoring might come as a luxury.

Both teams rank in the top-25 in terms of rushing yards allowed as well as points per game allowed.

With Auburn also allowing the 21st fewest rushing yards per game (and Florida the 16th), this game could be a battle won in the trenches that relies on field goals.

Florida has seen the under hit in four of their last five, so look to see if they make it five out of six when the game kicks off on ESPN.

The Buckeyes (-20) are the heavy favorites in this game after the line opened basically a touchdown less (OSU -13.5).

This is the first top-25 matchup for the Buckeyes and the second for Michigan State, who fell to the then #20 Arizona State Sun Devils 10-7 a month ago.

Taking the under (49.5) seems to be a smart decision, but there aren’t any trends that can really support this claim. Sure, both teams have a top-10 scoring defense, a top-7 rushing defense, and are No. 2 and No. 3 in yards allowed per play. But even with these defensive accomplishments, the under isn’t secure.

Both teams have played in five games this year with three of them surpassing the projected total. Ohio State’s scoring offense, which ranks third in the country, as well as their rushing offenses (which ranks 12th), could cause problems for a Michigan State defense that plays much better at home.

As far as their offense is concerned, they average roughly 40 yards less through the air and through the ground, making them unreliable to score points against the Buckeyes.

With this, many are clicking to US online sportsbooks looking at taking Ohio State (-20) on the spread, as the moneyline is too inflated to take a risk. As Ohio State is 3-0 at home on the year and has covered the spread in four of their five games (as opposed to two for the Spartans), there should be no issues with this betting line.

The final top-25 matchup of the weekend kicks off on ABC.