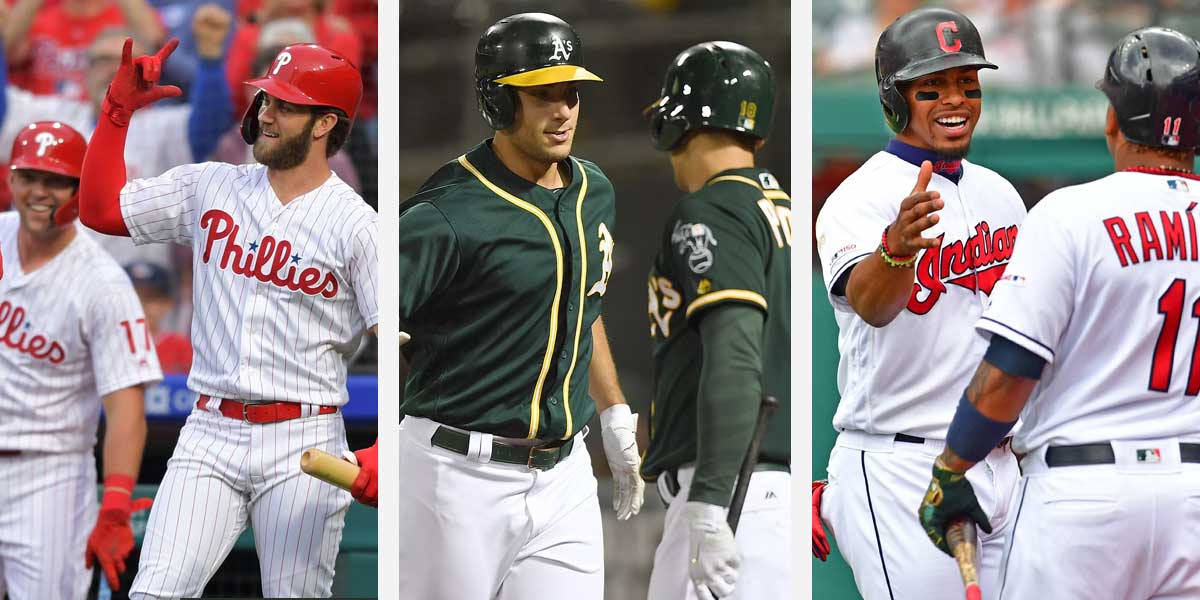 NEW YORK – Every year in the MLB there is a team that makes a historic run after the MLB All-Star Week and puts up a fight to win their division.

All of the division leaders are 5-7 games ahead of the second-place team, with the exception of the LA Dodgers (13.5) and the Chicago Cubs (0.5).

This leaves the option for a few teams to surpass their leader and potentially win the pennant. By using odds from Bovada, here are the top 3 teams who might surprise in the second half of the MLB season and win their division:

The Phillies come onto this list currently ranked third behind the Atlanta Braves and Washington Nationals. The Braves hold a 6.5 game lead, while the Nats are only a half-game up.

The addition of Bryce Harper has proved to be rather futile in his year half-year; however, there would be no shock if remembered how to play baseball moving forward.

The team has been pretty average throughout the season, falling in the 12-18 range for a variety of hitting categories; however, if Harper can get it together, he will be a nice 1-2 punch alongside Rhys Hoskins.

The third-year player is having a career year, posting his highest-ever batting average, on base percentage, and is on pace to have his best year in runs, home runs, and RBIs.

It may take some luck, but +900 for a team that has two all-star pitchers in Aaron Nola and Jake Arrieta and with solid production from Zach Elfin this year, they could make bettors who took a chance very happy.

The A’s come in as the largest underdog on the list. They are 7 games back from the Houston Astros, who will likely need to lose a few games in order for the A’s to catch up. Houston is one of four teams with a winning percentage above .600 but Oakland’s numbers aren’t much further behind.

They are 7-3 in their last ten games and are one of seven teams with a winning record against teams above .500. With the sixth-best run differential in the league, the Athletics could continue their run and make a case for taking the AL West.

Oakland is top-ten in the league in home runs, runs, and fewest strikeouts. On the pitching side, they have allowed the sixth-worst opponent’s batting average and the fourth-fewest home runs while acquiring the seventh-best WHIP.

At +1300, taking a flyer on the A’s might be seen as comical versus the powerhouse Astros; however, the juice would be worth the squeeze.

The Indians are 5.5 games back from the Minnesota Twins and, like the As, are 7-3 in their last 10 games. Cleveland was riding a six-game winning streak before heading into the All-Star break and will look to continue their success moving into the summer months.

With a winning record at home and on the road, the Indians are one of eight teams in the MLB who can stake this claim.

The team is led by their All-Star pitchers in Trevor Bauer, Shane Bieber, and Brad Hand – with the last two making the All-Stars this season. Coming back from injury is the two-time Cy Young Award winner Corey Kluber, who had his cast removed from his broken arm in late May.

“I’m just in this stage now where we still have to get permission from the doctors, and hopefully, that’s coming soon,” said Kluber.

USAOnlineSportsbooks.com knows even without the ace, the Indians pitching staff is top 5 in the league in opponents’ batting average, WHIP, earned runs, and runs allowed. They are also top 10 in the league in strikeouts and saves.

Would you take a chance on the back-to-back-to-back Central Division title holder at +650? It could be a smart bet.