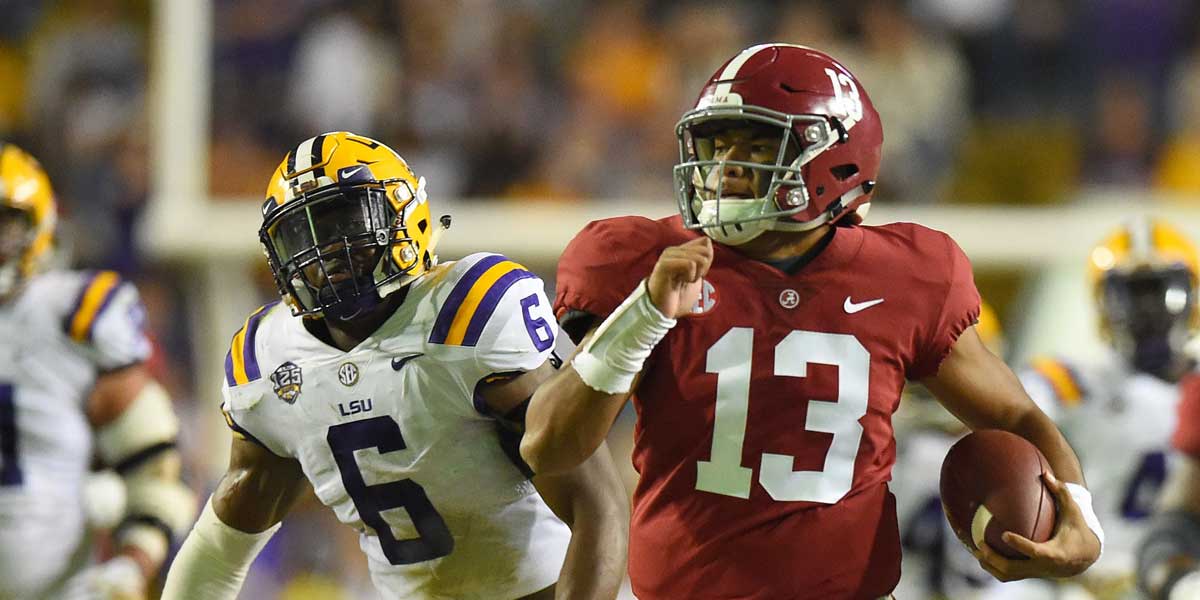 TUSCALOOSA, Ala. – Week 11 of the college football season is underway. With the first college football playoff rankings being released earlier this week, every game is crucial as the postseason approaches. The Saturday slate of games gifts us three matchups of Top 25 teams that will reshape the College Football Playoff picture.

The No. 2 LSU Tigers are six-point underdogs on the road against the No. 3 Alabama Crimson Tide in a classic matchup of SEC juggernauts. Both teams come into this game undefeated. The winner will likely have clinched a berth in the SEC Championship game, along with having an impressive victory for the College Football Playoff committee to consider.

The 62.5-point total in this game at US sportsbooks will likely go under as both teams’ defenses have stifled opposing offenses all season long. History supports this because the total has gone under in four of the last five meetings between LSU-Alabama.

This game will come down to the matchup of quarterbacks: LSU’s Joe Burrow and Alabama’s Tua Tagovailoa. Both quarterbacks will be looking to lead their teams to victories and add another big performance to their Heisman Trophy resumes. Expect the biggest game of the season thus far to not disappoint and deliver one of the most memorable games in recent history.

Penn State shocked the college football world by being ranked in the top four of the first College Football Playoff rankings, while the Clemson Tigers were left on the outside looking in. The Nittany Lions are defending that No. 4 ranking on the road against the No. 17 Minnesota Golden Gophers in a Big Ten Conference showdown between two undefeated teams.

The Nittany Lions are 6.5-point favorites to win on the road in this matchup and they should be able to cover the spread comfortably. This will be the toughest team Minnesota has played all season and it won’t be easy for them to pull off the upset against a Nittany Lions defense that’s allowing an average of 9.6 points per game.

The seemingly low 47.5 total in this game seems likely to go over as both teams have potent offenses that are averaging well over 35 points per game. The over has hit frequently when these two teams have met; in four of the last six matchups between Penn State-Minnesota, the total has gone over. The Nittany Lions should be able to get their third straight win over a Top 25 ranked opponent.

The No. 13 Wisconsin Badgers are nine-point favorites at home to top the No. 18 Iowa Hawkeyes in another Top 25 matchup between Big Ten Conference teams. Both teams come into this matchup with 6-2 records and the Badgers are currently riding a three-game winning streak against the Hawkeyes.

The Badgers are looking to bounce back from their blowout loss at the hands of the No. 1 Ohio State Buckeyes. This will be a great defensive matchup as Iowa is only allowing an average of 10.1 points per game to opponents, and the Badgers are only surrendering 11.4 points per game. This also explains why the total for this game is so low at 38.5 points. The under will likely be the best bet to take here as both defenses continue to stifle opposing offenses.

One player to look out for in this game will be Wisconsin running back Jonathan Taylor.  He’s been the Badgers best player on offense all season and has run for 1,009 yards and 15 touchdowns through eight games. If the Badgers lean on Taylor, they should be able to win this likely low scoring affair.