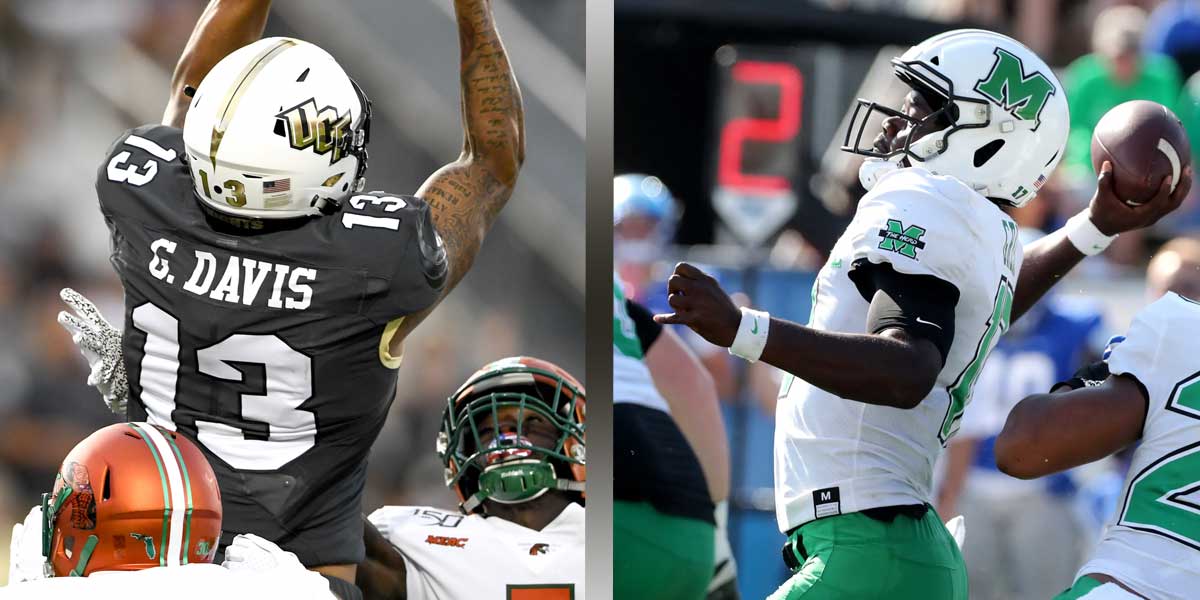 TAMPA BAY, Fla. – The Marshall Thundering Herd visit the Sunshine State to take on the UCF Knights in the Gasparilla Bowl in Tampa Bay, Florida. The game does take place at a neutral site in a technical sense because Tampa Bay is only around 80 miles from UCF’s home of Orlando, Florida.

Marshall is a significant underdog (+15) according to online sportsbooks. The point spread has been moving slightly in their favor though – it opened at +17.5 points for the Thundering Herd.

In the entire history of the UCF Knights football program, they have never had three consecutive seasons with 10 or more wins. This streak could end today, as the Knights are 9-3 entering the game. Only four years removed from a winless season, and only two from an undefeated one, the Knights are no strangers to surprise.

The Knights ranked as high as 15th this year, after starting the season ranked 17th in the AP Poll. They’ve been the subject of debate over the last few years, as their immaculate record thrust them into the heart of championship discussion, but never into the College Football Playoff.

UCF is 9-3 on the season, but only 5-7 ATS. All three of their losses have come away from home, but this is not a true road game and one could argue this is not really a true neutral-site game either.

The Knights are lead by breakout freshman quarterback Dillon Gabriel, after a brutal injury in November of 2018 sidelined starting quarterback McKenzie Milton for the entire 2019 season. Gabriel has been nothing short of sensational, with almost 3,400 yards passing, 27 touchdowns, and only seven interceptions. He looks to be the key player in this matchup.

The Thundering Herd enter the game as a significant underdog in more than just the point spread. As an 8-4 team from the Conference USA, nobody expects them to beat the relative big dog in UCF. Marshall has a knack for bowl games, though. In their last 14 bowl appearances, they are a staggering 12-2.

Marshall enters the game with decent statistics as a team, but those statistics were earned over a poor schedule. For example, they rank 41st in points surrendered on defense, but their strength of schedule is 97th in the nation.

In the air, their attack flows from quarterback Isaiah Green, who has contributed 2,265 passing yards over the course of the season. On the ground, the Herd thunder through Brenden Knox, a star running back who has put up an astounding 5.3 yards per carry on the way to a 1,284 yard season on the ground. Knox leads Conference USA in rushing this season.

Marshall is 8-4 this year, but only 4-8 ATS. However, their bowl magic also appears to extend to the spread, historically speaking. Marshall is 7-0 ATS in their last 7 bowl games, a statistic nearly as astounding as their aforementioned 12-2 record straight up in their last 14.

This game looks to be fantastic and should be an excellent way to spend your Monday. The Gasparilla Bowl kicks off at 2:30 p.m. EST on ESPN.