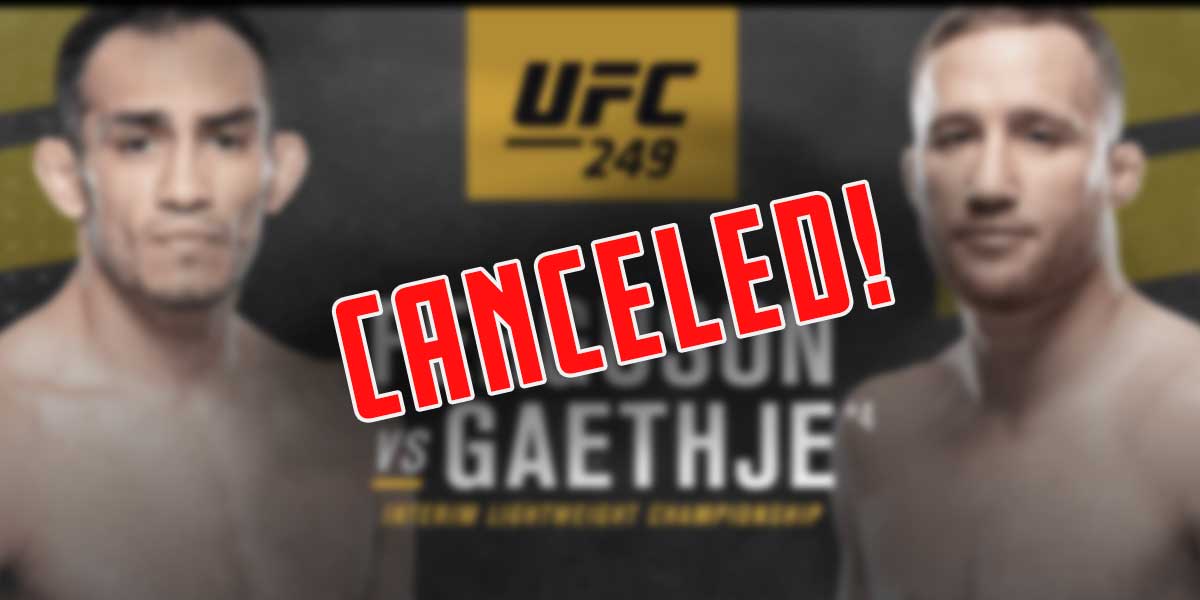 LEMOORE, Calif. — UFC 249 has officially been canceled even after Dana White had expressed confidence that the event was still going to take place. Although UFC 249 is canceled, there are still betting options for future UFC events.

The coronavirus pandemic has put an end to UFC 249 despite the tremendous efforts by UFC President, Dana White, to keep it going. White had mentioned that he went as far as securing a private island in order to host the event which would have aired on ESPN+. Disney, however, the owners of ESPN, decided to pull the plug on the event on Thursday.

“Today, we got a call from the highest level you can go at Disney, and the highest level at ESPN ... and the powers that be there asked me to stand down and not do this event [next] Saturday,” said Dana White.

ESPN had been in close contact with the UFC before ultimately deciding to cancel the event.

In a statement, ESPN said it “has been in constant contact with the UFC regarding UFC 249. Nobody wants to see sports return more than we do, but we didn't feel this was the right time for a variety of reasons. ESPN expressed its concerns to the UFC and they understood.”

In addition to having the event on a private island, White also stated that he had secured a location in the United States as well at the Tachi Palace Casino Resort in Lemoore, California. Tachi Palace is an Indian reservation and does not have to abide by the state's executive stay at home order which made it easier for the UFC to host the event there.

“It's been a battle since day one— We've been fighting nonstop all day and all night, since this pandemic started, to put on this event on April 18— Tachi Palace in California, the Indian reservation, has had our back this whole time, has stood their ground and was willing to do this fight. And let me tell you this: When the world gets back to normal, California, that [fight] will be at Tachi Palace,” said White.

The senator of California, Dianne Feinstein released a statement weighing in on the UFC’s situation as well.

“This event would involve dozens of individuals flying to California and driving to a casino for a purpose no one can honestly claim is essential— I understand this event is scheduled to take place on tribal land and therefore is not subject to state law. However, at best this event ties up medical resources and sends a message that shelter-in-place orders can be flouted— At worst, participants and support staff could carry the virus back to their home communities and increase its spread,” said Dianne Feinstein.

All in all, with the event canceled, Dana White is looking to do right by his fighters. The UFC is not obligated to pay its fighters during this time off.

“All of my fighters that are under contract with me, I want them to feel safe, take time with your families and enjoy this time— Don't worry about the financial part of this. You're gonna get the fights in your contract, and I'm gonna make things right with the people who were willing to step up and fight next weekend on April 18— And I'm gonna take care of as many people as I possibly can and do whatever it takes to make these guys all feel comfortable,” said White.

As 249 is sadly canceled, not all hope is lost for UFC fans and bettors as online sportsbooks are still offering betting lines for UFC 250 and other future UFC fights that are offered on ESPN.

The UFC 250 card features Amanda Nunes defending her featherweight championship against Felicia Spencer. Nunes is the heavy favorite to keep her title at -500 while Spencer’s odds are at +350. Also taking place at UFC 250 is Fabricio Werdum and Aleksei Oleinik. Werdum is the favorite to win in this one with -275 odds while Oleinik is at +215.

Other fights that have betting lines available are Anthony Smith and Glover Teixeira. Smith is the leader in odds here at -200 while Teixeira is at +160. This fight is scheduled to take place in Lincoln, Nebraska. Also, Jack Hermansson and Chris Weidman are set to go at it in Oklahoma City, Oklahoma where Hermansson is the favorite at -170 and Weidman at +140.

While the exact date of these fights is still up in the air, sportsbooks trust Dana White’s sentiments and are confident in them taking place at some point in the near future.