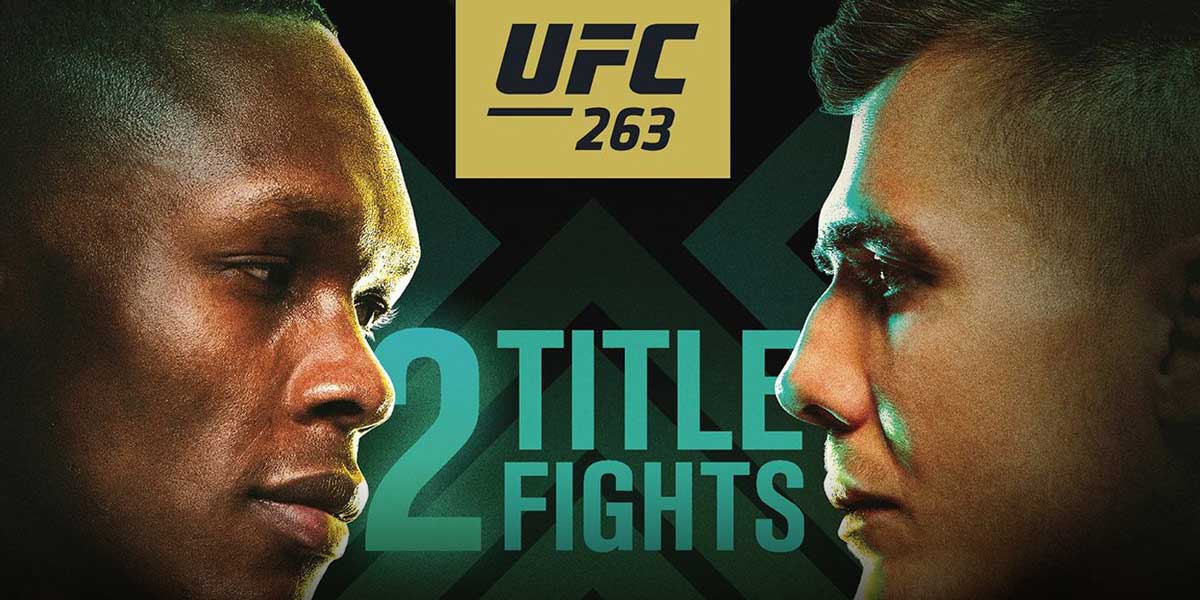 GLENDALE, Ariz. – UFC 263 is one of the most stacked cards from top to bottom that has been seen in a long time with five fights to cover.

The Middleweight title will be on the line in the UFC 263 main event. Adesanya, the reigning champ, started his career 20-0 before losing his last fight as he jumped up a weight class and tried to win the light heavyweight belt.

Vettori is currently on a five-fight win streak and his last loss came to Adesanya back in April 2018. However, it was a split decision and Vettori has improved greatly since the loss.

He still remains the underdog by a solid margin on sports betting sites.

The blueprint has been made available on how to beat Adesanya, wrestle, grapple and wear him out with size. Fortunately for Vettori, he has everything he needs to do exactly what Jan Blachowicz did to Izzy back in March.

Adesanya is a kickboxer and his core and has now been exposed in his ground game. Vettori is a wrestler who has nine wins by submission as opposed to his two knockouts and six decisions.

He also has never been finished with all four of his losses coming by decision.

The co-main event will be between Figueiredo and Moreno for the flyweight title. These two fought to a majority draw in December in one of the best flyweight fights of all time.

Figgy was deducted a point for a groin strike which ended up costing him a straight-up win. Figueiredo is a sizable favorite despite the draw just six months ago.

Moreno is an absolute warrior in the octagon, but Figgy has proven too dominant to confidently bet against. Plus, it was reported Figueiredo was in the hospital the night before the first meeting between the two. He should be in better shape coming into this one.

Nate Diaz and Leon Edwards will fight in the first five-round fight in UFC history that isn’t the main event or title fight on Saturday. Diaz will be making his return to the ring for the first time almost two full years when he lost to Jorge Masvidal.

Leon Edwards was on an eight-fight win streak before fighting Belal Muhammad which ended in a no-contest due to an eye poke. Edwards is listed as the biggest favorite on the main card on online sportsbooks.

If Diaz is going to win, it’ll likely need to be by submission. Edwards has a clear striking and kickboxing advantage while Diaz is better on the mat. The fact that this is a five-round fight favors Diaz as he always comes on strong in the later rounds, but recently we’ve seen he tends to start a little too slow.

Even those rooting for Diaz will probably admit this is a tough matchup for him after such a long hiatus.

Demain Maia is one of the best submission artists in the UFC’s history, however, he is 43-years-old now and has lost four of his previous seven fights. It’s rumored this might be his retirement fight.

Muhammad was on a four-fight win streak prior to the no-contest against Edwards and seems to be peaking in his career. Given his form and Maia’s struggles, it’s not surprising Muhammad is the betting favorite.

It would be nice to see Maia end his career on a win, but Muhammad’s nickname is “Bully” for a reason. Muhammad has great wrestling ability, but due to Maia’s BJJ may try to keep the fight on the feet. Either way, he has more paths to a victory than Maia does.

In the main card’s opening fight Jamahal Hill will fight Paul Craig. To get straight to the point, UFC betting fans need to look into the underdog in this fight.

Hill’s resume doesn’t justify his short odds. His best win is against a 37-year-old Ovince Saint Preux who couldn’t make weight. Meanwhile, Craig is one of the best submission artists in the game right now, having 12 submissions in his 14 wins.

Expect Craig to do whatever he can to take the fight to the ground and work towards a submission. Conveniently, the weakest part of Hill’s game is his takedown defense and ability to get off the mat. Wrestlers tend to fair well against strikers, we’ll see if that trend continues here.