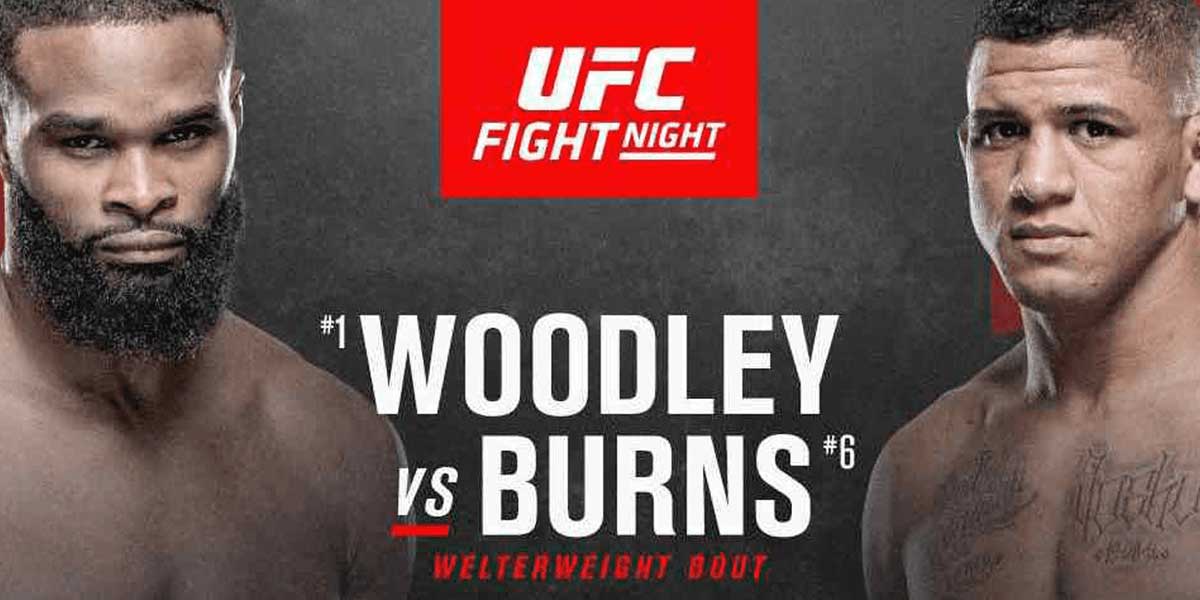 LAS VEGAS - The UFC is back with another Fight Night event, this time headlined by a bout between Tyron Woodley and Gilbert Burns.

The fights will be broadcast from the UFC APEX Center, as the action begins at 6 p.m. EST.

With five bouts on the UFC Fight Night main card, UFC betting action will not be in short supply on Saturday.

The first match on the main card pits Mackenzie Dern in a fight against Hannah Cifers. Dern, with her 7-1 record, is a heavy favorite in this fight.

Dern’s odds put her at -400 to win the fight outright, which is a lot when it comes to UFC betting, as fights can end at a moment’s notice. In fact, no other fight on the card offers a more secure favorite than Dern.

Cifers, for her part, enters the fight as a serious underdog, with +300 odds to take the fight.

This looks to be a stylistic clash between the two fighters, as Dern has won none of her fights by KO, and 57% by submission.

The next fight on the card pits Roosevelt Roberts against Brok Weaver, in another fight that looks to have extremely significant favorites and underdogs.

Roberts, “The Predator”, is an all-around fighter with a 9-1 record in his career so far. Weaver, by contrast, has been in 19 fights and won 15 of them.

A whopping 65% of Weaver’s wins come by decision, while only 22% of Roberts’ do.

Despite the long odds offered at many online sportsbooks, the fight should shape up to be better than expected.

Despite his nickname, Carlyle is actually the underdog in this fight.

Quarantillo is a mild favorite with -140 odds to take the fight, while Carlyle has +110 odds to make those who bet on him very happy.

Quarantillo’s 13-2 record is not that much better than Carlyle’s 9-1 record, and the two seem relatively evenly matched, especially compared to the previous two fights on the card.

This might be the first truly even contest on the card and is a worthy one for many UFC bettors to examine.

The fourth match on the main card features Blagoy Ivanov and Augusto Sakai facing off in a heavyweight bout.

These are the 12th and 13th ranked fighters in the heavyweight division in the UFC, and the match looks to be as unpredictable as most heavyweight matches tend to be.

Matches in the heavyweight division tend to be unpredictable due to the power of the strikes being thrown in the division - any punch can end a fight.

The odds for this fight reflect this truth - Sakai is a -120 favorite, while Ivanov has -110 odds, right behind him.

The fight looks to be as close and competitive as a fight can be without being a pick ‘em.

This should be a power-packed fight, and bettors would be advised to pay attention.

Woodley, the number one ranked fighter in the division, lost the belt to the current champion, Kamaru Usman, at UFC 235.

He faces off against Gilbert Burns, who is riding a five-fight win streak to a chance at greatness.

This is an opportunity for Burns to vault himself into true contendership. Both of the fighters are well rounded, having finished opponents with both knockouts and submissions.

Woodley is a -175 favorite to maintain his spot as the number one contender in the division, while Burns is a +145 underdog to take the fight, and perhaps Woodley’s number one spot.

This is the main event of the night, so if any person out there were to watch only one of the fights - this is the one.