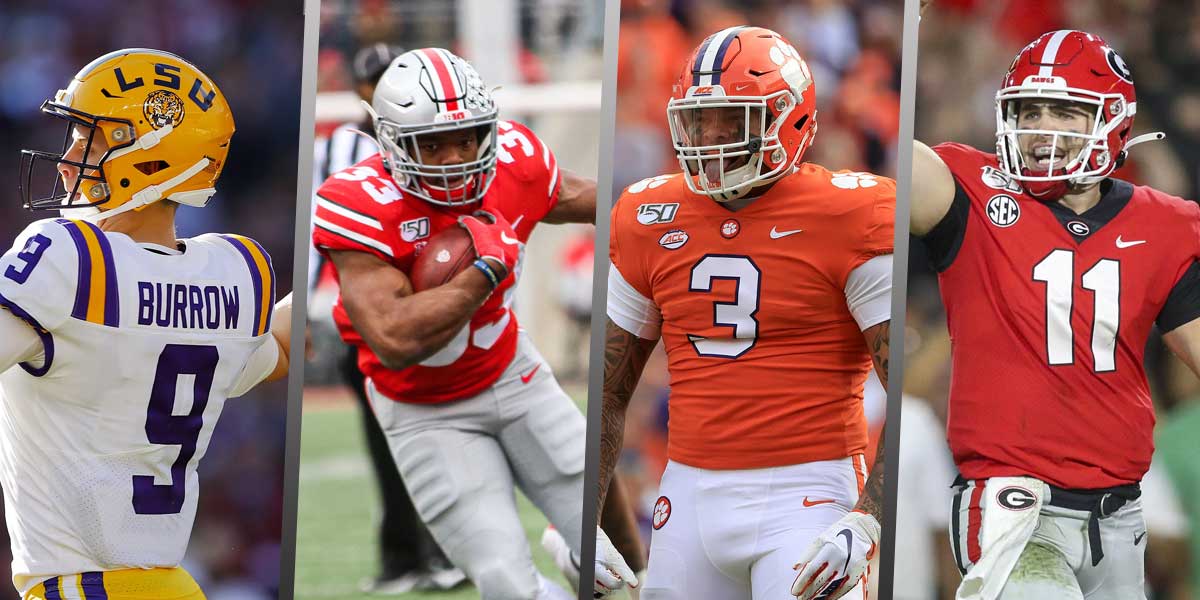 TALLAHASSEE, Fla. – Week 13 of the college football season brings us another week closer to the College Football Playoffs. With the regular season’s conclusion right around the corner, many teams are now positioning themselves for bowl games.

The College Football Playoff rankings are now the only rankings that matter for the rest of the season.

The Favorites To Win The CFP National Championship

There were no changes in the top four teams going into this week in the College Football Playoff rankings. The teams that would make the playoffs if they were to start today are the No. 1 LSU Tigers, No. 2 Ohio State Buckeyes, No. 3 Clemson Tigers, and No. 4 Georgia Bulldogs.

Although the LSU Tigers are the No. 1 ranked team in the AP Top 25, Coaches Poll, & College Football rankings they’re not the betting favorite at USA Sportsbooks. The No. 2 Ohio State Buckeyes have the shortest betting odds to win the 2020 NCAA College Football Championship at +190.

The Buckeyes are a very talented team on both sides of the ball and have been dominating their opponents all year. With two matchups against the No. 8 Penn State Nittany Lions and the No. 13 Michigan Wolverines to end their season, the Buckeyes will have their work cut out for them if they’re going to stay in the playoff picture.

LSU is not far behind the Buckeyes at US sportsbooks as they have the second shortest odds for the national title at +250.

With Heisman favorite Joe Burrow (-1200 Heisman Odds) under center for LSU, it’s hard to see a team knocking them from the top spot in the CFP – especially when they close the season out with games against the Arkansas Razorbacks and Texas A&M Aggies.

The SEC Championship will be the next big game for LSU and that game may decide the fate of the CFP.

The Clemson Tigers are the defending national champions and have seemingly flown under the radar for most of the year. They still have one of the most talented young quarterbacks in Trevor Lawrence and have fallen victim to the other teams in the ACC not being competitive. Clemson’s national title odds are the third shortest at +275 and this team cannot be written off in the playoffs as they’re looking to win back to back National Championships.

Of the four teams in the playoffs right now, the Georgia Bulldogs are the only team with a loss on the season. The Bulldogs mid-season 20-17 loss to the South Carolina Gamecocks remains a stain on their playoff resume. However, if they win out the rest of the season and then beat LSU in the SEC Championship Game, that will guarantee them a spot in the playoffs.

Sportsbooks list the Bulldogs at +700 odds to win the national title which is the longest odds for any team in the top four. This leaves Georgia with little room for error heading into the final stretch of the season, as one loss could potentially end the Bulldogs postseason dreams.

Longshot Candidate To Make The Playoffs

A potential sleeper team that could make the College Football Playoffs is the No. 9 Oklahoma Sooners. If this team didn’t get upset by an unranked Kansas State  team, they’d have control of their own destiny and be locked into the No. 4 spot in the CFP ranking. The Sooners will have to win the Big 12 Championship game which will likely be against the No. 14 Baylor Bears. Before that game, the Sooners will have to play the No. 21 Oklahoma State Cowboys in what will be a tough rivalry game.

With quarterback Jalen Hurts being among the Heisman finalists and a matchup looming between LSU-Georgia. This could allow the Sooners to sneak into the fourth spot and with sportsbooks currently listing their national titles odds at +2000, they’d give bettors a nice return on their wager. Oklahoma has made the CFP the past two seasons, but they’ll need quite a bit of help to keep their playoff streak alive this year.