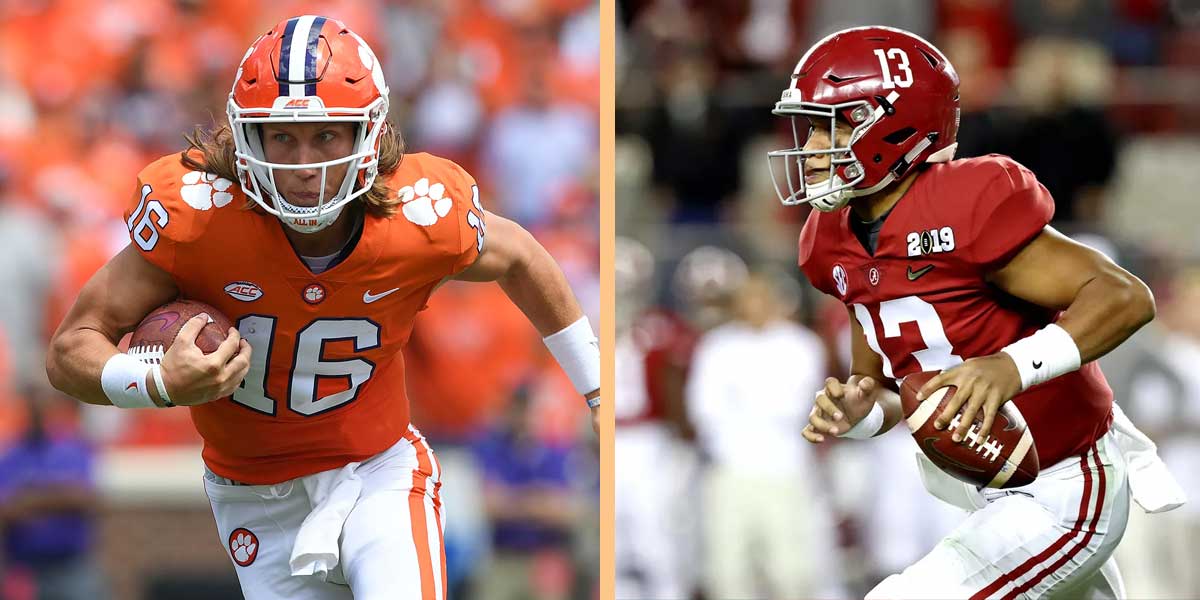 TALLAHASSEE, Fla. – With two weeks of college football in the books, the futures odds surrounding the Heisman race as well as the team to win the National Championship have changed. The changes reflect the oddsmakers and media’s perceptions of the teams after their opening performance and some notable changes have been made clear.

Before the games begun, FanDuel Sportsbook sent out data sheet that detailed the current odds for these two popular college football futures bets. Now, we can compare the movement and look forward to how they will be adjusted again moving forward.

For months, the entire betting world has heard the names Trevor and Tua be thrown around as if they were the only candidates in the race. As these two quarterbacks, Trevor Lawrence (Clemson) and Tua Tagovailoa (Alabama) lead the two most prestigious teams to beat this year, there is no doubt they sit atop the list.

But after the first two weeks of games, both of their odds have increased, indicating the books believe their probability of winning the award has decreased. This comes as no shock, as Lawrence (opened +250, now +300) has already thrown three interceptions – one less than he threw all season last year – and is averaging only 218 passing yards per game.

As for Tagovailoa (opened +250, now +500), he has had an excellent start with seven touchdowns, zero interceptions, and a completion percentage above 76%. Still, this dominant play hasn’t stopped his decline in odds, as others like Jalen Hurts, Jake Fromm, and Joe Burrow have made it more of a competition.

These three quarterbacks have all seen their opening odds increase since the start of the year. While Fromm is still a sizeable distance behind the aforementioned Heisman favorites, Hurts and Burrow have become more serious contenders.

Burrow (opened +2500, now +500) is giving those who had the faith on him early a smile, as they hold a ticket worth five times what it was a week ago. The LSU senior put a beatdown on Georgia State in the Tigers’ opening game but really impressed against a top-10 opponent in Texas last week.

With nine touchdowns, one interception, a completion percentage of 81.8%, and an average above 11.3 yards per attempt, Burrow has shown that Alabama is not the only SEC team to be on the lookout for.

As for Hurts, he has jumped on the same train that has given Oklahoma quarterbacks the success at the Heisman campaign. His two games of three touchdowns and no interceptions have positioned him at the 4th-highest odds. Though Hurts (opened +1000, now +700) does not have close to the number of passing yards as the other quarterbacks mentioned on this list, the Sooners’ season schedule gives him plenty of opportunities to make up this statistic.

How Will The Betting Odds On The Heisman Change?

As they have already changed to make the field more competitive, you can be certain this will not be the final change in the Heisman race. Last year, Kyler Murray was given +1800 odds around this time and worked his way up the leaderboard until becoming the favorite during the last week of the season.

The quarterbacks have plenty of games left and these odds will change, as each week progresses. With a road SEC game for Alabama, expect Tagovailoa’s odds to decrease next week, assuming the Tide take care of business in Columbia, SC. Lawrence will also be on the road, as Clemson plays against Syracuse so it is likely his odds will return closer to the opening level as well.

All eyes will be on Burrow though, as the home “cupcake game” against Northwestern State will give oddsmakers at USA online sportsbooks plenty of reason to increase or decrease his odds depending on his performance against a lesser opponent.

Though a skill position hasn’t won the Heisman since Derrick Henry in 2015, don’t count out some of the highest-performing athletes so far. Wisconsin running back Jonathan Taylor (+1600), Clemson running back Travis Etienne (+2500), and Georgia running back D’Andre Swift (+2500) don’t have the numbers to support them at the moment, but are still amongst the favorites to hoist the award as a member of the backfield.

As for the wide receivers, don’t discredit Alabama’s Jerry Jeudy (+6000) or Purdue’s Rondale Moore (+10000) from the running. Still, their likelihood is low, but throwing a small-risk wager can still be rewarding.