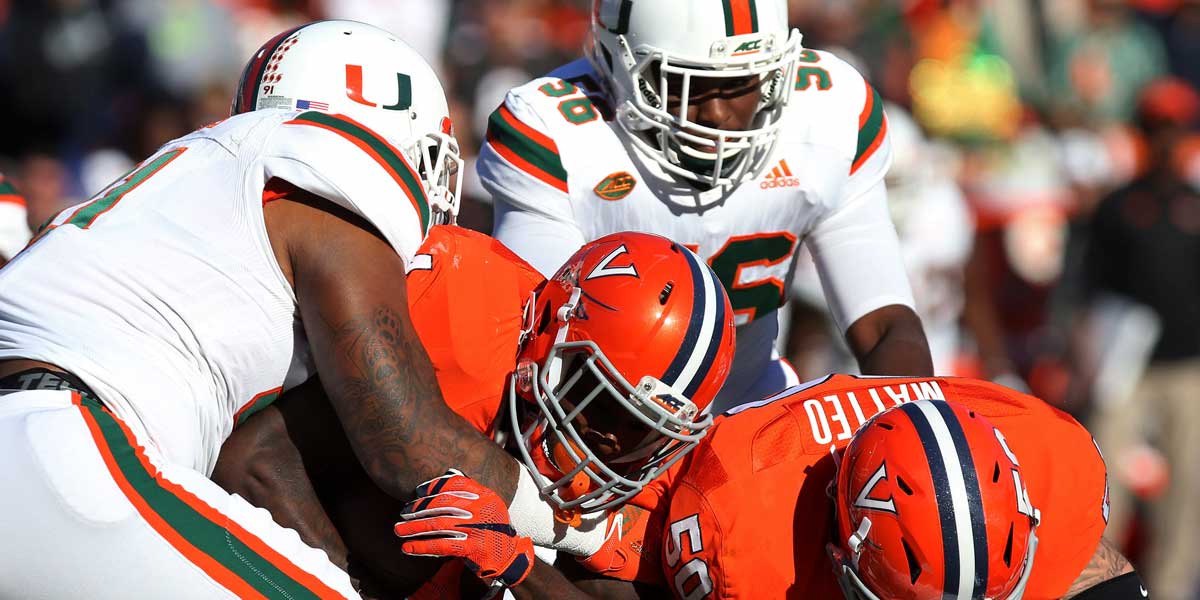 MIAMI – The Virginia Cavaliers will battle the Miami Hurricanes on Friday night, but the current odds for the ACC showdown may shock you.

The Cavaliers are 4-1 on the season, ranked 20th in the country according to the AP Poll, and leading the ACC Coastal Division. Yet, they are 2.5-point underdogs to the Hurricanes who are only 2-3 and whose only wins on the season come off the backs of the Central Michigan Chippewas and the Bethune-Cookman Wildcats.

There are a couple of different factors that come into play with a line like this. First off, the game is going to be played in Miami. Virginia hasn’t won in Miami since 2011.

According to ESPN, Miami will also be starting N’Kosi Perry at quarterback for the game. Perry threw for a career-high 422 yards and four touchdowns against Virginia Tech just last week.

However, a bet on the Cavs to cover may be a smart move. The Hurricanes are 4-9 ATS at online sportsbooks in their previous 13 games after suffering a straight-up loss. Virginia, on the other hand, is 5-2-1 ATS against their last eight ACC opponents.

As far as the over/under goes, bookmakers aren’t expecting too much scoring. The line is currently set at 43 points. On the season, Virginia has scored an average of 32.2 points per game has only allowed opponents to score 21.4 points.

Similarly, Miami has averaged to score 32 points per game and have only given up 21.2 points to their opponents.

What’s important to keep in mind is the opponents that each team has played. The 63 points that the Canes put up against Bethune-Cookman could be skewing their average and similarly, the 52 points that Virginia scored against William & Mary might be boosting their numbers.

Still, the 43-point line seems to be low given how both teams were able to score in their last games. Miami was able to score 35 points despite being down 28-0 at one point against the Virginia Tech Hokies and Virginia was able to score 20 points against 9th ranked Notre Dame. Taking the over looks tempting.

However, according to 247sports, the hurricanes are ranked 15th overall in the country in total defense and the Cavaliers are ranked second nationally in sacks.

Both teams are coming off of losses and are going to be hungry for a win. Miami will be looking to get their first conference win while Virginia is hoping to stay on track and win the division this year.

The Cavaliers are coming off of a bye week, which gives them more time to prepare and more time to get healthy. Both teams are expected to come out aggressive and with a chip on their shoulder.