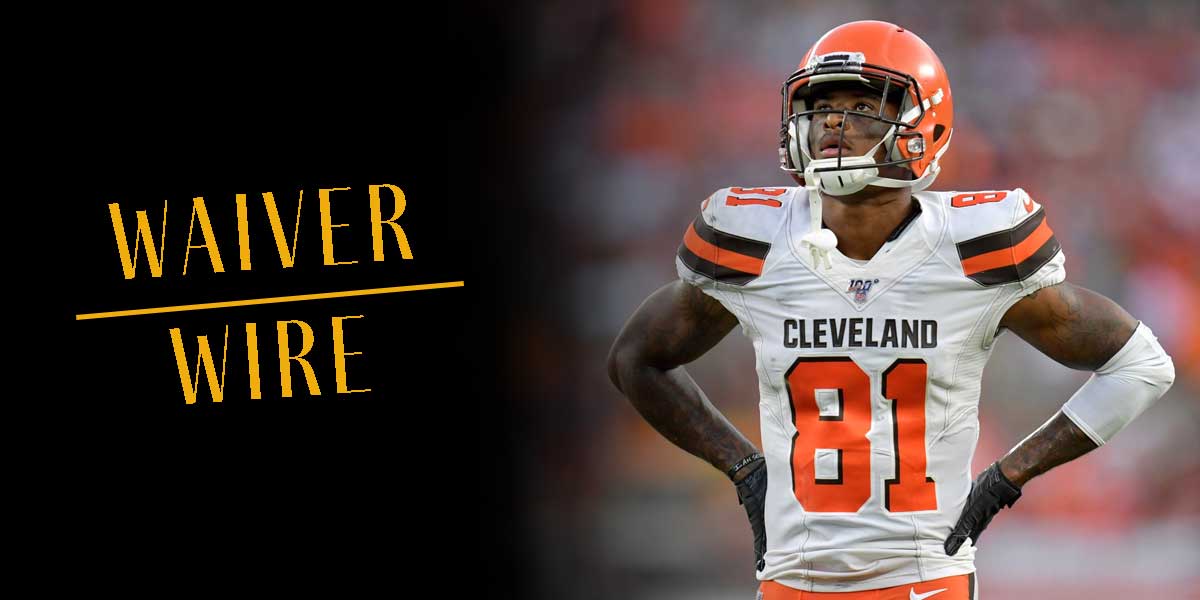 CLEVELAND — With Week 7 of the NFL season in the books, fantasy football owners should be looking at the waiver wire for different ways to improve their teams.

There is plenty of talent available on online betting sites waiver wires at every position including running backs, wide receivers, and tight ends.

The top wide receiver that should be looked at right now is certainly Rashard Higgins.

Unfortunately for the Browns, they lost their WR1 in Odell Beckham Jr. for the remainder of the season to a torn ACL. With Odell now sidelined, Higgins becomes the next man up on the depth chart as the WR2 while Jarvis Landry takes over WR1 duties.

As Odell went down towards the beginning of their Week 7 matchup with the Cincinnati Bengals, Higgins took over as the second option and went 6/6 on targets and receptions for 110 yards and proved that he can add some fantasy value as he put up 14 fantasy points.

Hasty is the first running back that should be targeted on fantasy football sites as he is in a great situation with the 49ers right now.

The 49ers have been dealing with injuries all season long which includes having both their RB1 Raheem Mostert and RB2 Tevin Coleman on IR. With them both on IR, things would turn to Jerrick McKinnon and Jeff Wilson, however, Wilson is injured as well which leaves Hasty as the next man up.

With Wilson going down in Week 7, Hasty stepped up where he rushed the ball nine times for 57 yards. Now that he’ll get a full workload as the RB2, he will get plenty of opportunities to make things work and be considered a flex play some weeks.

The second running back to target on the waiver wire in Week 8 is Jets running back, La’Mical Perine.

Perine looked like the RB1 for the Jets as he was on the field for 70% of the Jets snaps in Week 7 where he rushed 11 times for 39 yards, one touchdown and 12.5 fantasy points.

This could be a high reward pick up here as the Jets clearly used Perine way more than Frank Gore who only saw 28% of snaps but the problem here is that he is still on the Jets who are the worst team in the NFL. With the Jets clearly in tank mode, they could look more in Perine’s direction as Gore is not what he once was.

Sterling Shepard can comfortably be added back to fantasy football rosters as he was activated from IR prior to the Giants Week 7 matchup with the Eagles and completely dominated in his first game back after suffering from turf toe.

Shepard put up six receptions on eight targets for 59 yards and a touchdown against the Eagles and will be a solid flex option most weeks as he is one of the top receiving options for the Giants.

His return to the field could put a damper on the fantasy value of Darius Slayton and Even Engram but should have a positive impact on Daniel Jones.

Rodgers is in a prime position to produce well as he was forced into the TE1 spot on the Eagles after both Zach Ertz and Dallas Goedert were placed on IR.

Rodgers has a solid outing in his first game as the acting TE1 as he had eight targets for six receptions and 85 yards. It also helps his case that the Eagles are thin at receiver right now with both Alshon Jeffery and DeSean Jackson sidelined with injuries.

As long as the Eagles are dealing with injuries in the receiving positions, Rodgers fantasy value will remain high and could be plugged into any fantasy team as the TE1 on a weekly basis.