Skip to content
USA Online Sportsbooks | Sports Betting | What Are The Odds That Tom Brady Leaves New England In 2020? 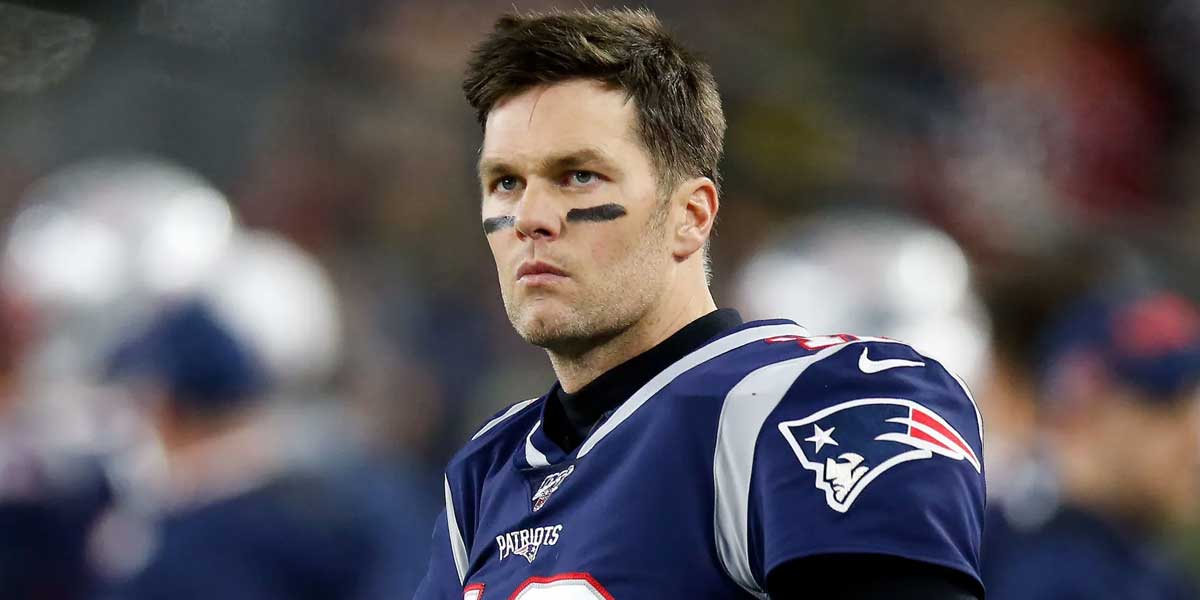 The 42-year-old quarterback is set to be an unrestricted free agent this offseason and cannot be franchise tagged by the Patriots. This gives Brady the ultimate control in deciding what team he will play for next.

Brady has spent his entire career with the New England Patriots, and if he has indeed played his last game for the Patriots, his last season was certainly one to forget. Despite finishing the season with a 12-4 record, this was the first time since 2009 that New England has not made it to at least the divisional round of the postseason.

Brady has made it clear that he wants to return to the NFL next season in an Instagram post he said, “I know I still have more to prove”.

Since the six-time Super Bowl champion has already ruled out retiring before the upcoming season, the online sportsbook BetOnline has released odds on what team Brady will be taking his talents to in 2020.

The market for Brady will feature a lot of potential suitors outside of the New England Patriots who are likely the frontrunners to retain their quarterback of the last two decades. However, with Brady deciding his own fate anything is possible. 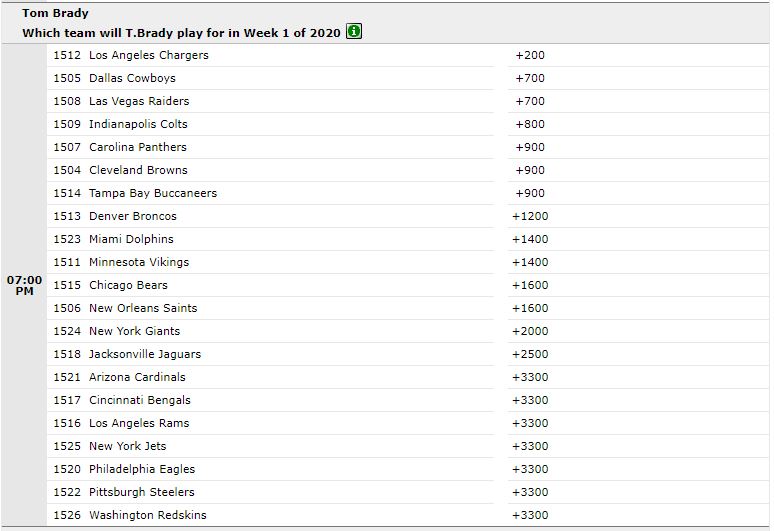 The Los Angeles Chargers are the betting favorite to sign Tom Brady with +200 odds. Brady would be a clear upgrade over longtime Chargers starting quarterback Phillip Rivers who may also be mulling retirement. This could be a very likely scenario as the Chargers already have a talented defense and plenty of offensive weapons for Brady to use.

If the Chargers were to sign Brady, they’d only need to upgrade their offensive line which was one of the worst units in the league this season. The struggles of the offensive line alone may keep Brady from considering Los Angeles.

Add in the fact that the team is coming off a season in which they finished last in the AFC West with a 5-11 record, Brady does not have another season to waste if he wants to win before father time catches up with him.

An advantage the Chargers have is that they’ll be carrying over $56 million dollars in cap space which will allow them to sign Brady along with other pieces to support him.

The Indianapolis Colts gave Jacoby Brissett an extension and the opportunity to become the franchise quarterback this season. While Brissett performed admirably in the wake of Andrew Luck’s sudden retirement he may not be the quarterback to get the Colts into the playoffs next season and that’s why the Colts with +800 odds will be one of the teams that Brady may consider.

They’ve got a great offensive line and a defense that’s starting to find its identity while being led by All-Pro linebacker Darius Leonard. The Colts were a playoff team just two seasons ago and have not undergone many personnel or coaching changes that have taken talent away from the franchise.

The Colts seem reluctant to give Brissett the starting job long term so why not use Tom Brady as a stop-gap quarterback until they find a better replacement?

Although Brady and the Colts have had some historic playoff battles, the Colts as a destination for Brady cannot be ruled out because the Colts head into the offseason with $92 million dollars in cap space.

That much cap space will certainly be used to grab Brady and other supporting pieces to help the team win now.

Although the Denver Broncos just drafted Drew Lock in the second round of the 2019 NFL Draft, they could still make a run at Tom Brady this offseason in an effort to win now. Especially with the talent they still have on the defensive side of the ball with Von Miller and Bradley Chubb harassing quarterbacks.

The Broncos have +1200 odds which places them in the longshot range. However, the risk could very well be worth the reward with this bet. We’ve seen the Broncos take in quarterbacks that are headed towards the end of their careers before in Peyton Manning and that brought them a Super Bowl title.

Denver finished the 2019 season with a 7-9 record and missed the playoffs for the fourth straight season. If the Broncos want to win now, then they should be one of the first teams to call Tom Brady this offseason.