Skip to content
USA Online Sportsbooks | Sports Betting | What Quarterback Will Finish The Season With The Most Passing Yards? 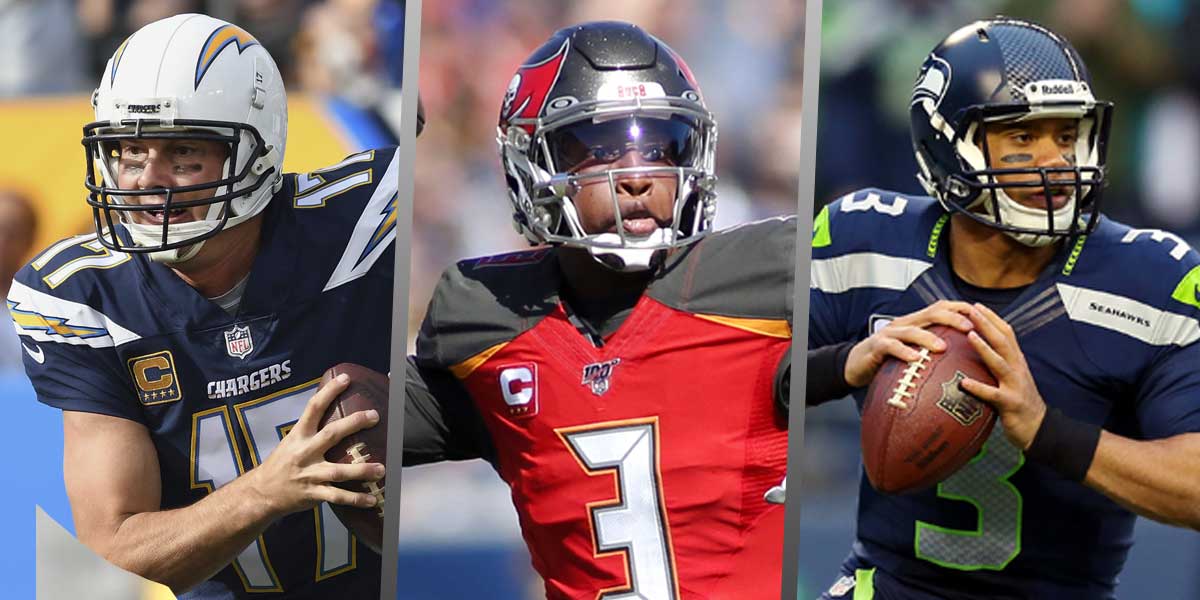 TALLAHASSEE, Fla. -- With the first half of the NFL season in the books, all eyes are now on the second half of the season with the playoffs right around the corner. The NFL has increasingly become a passing league and that has made the quarterback position even more important to team success.

Los Angeles Chargers quarterback Phillip Rivers has the most passing yards so far with 2,816 yards through 10 games. Behind Rivers are a number of quarterbacks that are likely to pass the 38-year old gunslinger in total passing yards by the end of the season.

Those quarterbacks are Dak Prescott, Russell Wilson, Jameis Winston, and Patrick Mahomes. Each quarterback is in an offense that relies heavily on the passing game to give their teams the best chance at winning.

Each quarterback can overtake mentioned above can overtake Phillip Rivers in the next few weeks especially when the Los Angeles Chargers have their bye during Week 12. Let’s take a deeper look into each quarterback’s chances of finishing with the most passing yards this season.

Russell Wilson has been the best quarterback in the NFL all season and has led the Seattle Seahawks to an 8-2 start. Wilson is the frontrunner in the MVP conversation and his play this season is evidence of that. The Wisconsin product has thrown for 2,737 yards this season which places him fourth in the NFL. He leads the NFL in touchdown passes (23) and passer rating (114.9).

The Seahawks are a team that loves to run the ball despite having Wilson playing at an elite level. If this team gets an early lead, they will quickly turn the ball to the running game and eat the clock. Seattle’s style of play is the biggest reason why sportsbooks have Wilson’s odds at +1200.

The Seahawks already have run the ball 307 times this season which is the fourth most in the NFL and have a Week 11 bye that Wilson will have to come back from with some ground to make up on the field. The Seahawks playing style alone will keep Wilson in the long shot range for this prop bet. However, with Wilson playing at an MVP level this season the +1200 maybe a sneaky value bet that could bring a nice return at the end of the season.

Dak Prescott is making a case to be the most improved quarterback in the NFL this season. These improvements along with new offensive coordinator Kellen Moore have led to the Cowboys offense averaging the most yards per game in the NFL at 437.4. Prescott also has the highest QBR in the NFL at 78.8 and his 2,777 passing yards are the second-most in the NFL.

Sportsbooks have Prescott listed with the shortest odds to lead the NFL in passing yards at +350. The Cowboys had their bye during Week 8 and are in the thick of the playoff hunt, so Prescott is likely to play in every game for the rest of the season. That gives Prescott the opportunity to lead the NFL in passing yards but with a tough December schedule with games against tough defenses like the Chicago Bears, New England Patriots, and Buffalo Bills it seems unlikely that Prescott will finish with the most passing yards.

Most of the chatter on Patrick Mahomes this season has been centered around the dislocated knee he suffered in Week 7. He returned in Week 10 with a 446-yard, three-touchdown performance in a 32-35 loss to the Tennessee Titans. That comeback performance placed Mahomes right back into the thick of the passing title race. Despite missing two games Mahomes has thrown for the sixth-most passing yards in the NFL with 2,626.

Something working against Mahomes leading the NFL in passing yards is Kansas City’s Week 12 bye. This is another game week missed in an already shortened season for Mahomes. Going forward it’s probably safe to assume that Mahomes will eventually take over the top spot for most passing yards this season. Sportsbooks have him at +550 odds with only Dak Prescott and Jameis Winston having shorter odds. Mahomes was one of two quarterbacks to throw for 5,000 yards last season, so he could very well compile the most passing yards in the NFL by the end of the season.

Jameis Winston has been one of the more inconsistent quarterbacks since he’s been in the NFL, but it hasn’t been because he lacks the arm talent to throw for 4,000 yards every season. Winston currently has thrown for the third-most passing yards in the NFL with 2,765.

It’s also a contract year for Winston, and leading the NFL in passing may get him an extension with the Bucs. The Tampa Bay Buccaneers have provided a good mix to produce a quarterback that can lead the NFL in passing. That mix is a pass-happy coach, with a defense that constantly gets beat through the air and has no running game. This means your team will likely be passing the ball early and often and that exactly what the Tampa Bay Buccaneers do.

The Florida State product has already thrown the ball 355 times which is the third most passing attempts in the NFL. Winston probably has the best case to lead the NFL in passing yards this season. His wide receivers Mike Evans and Chris Godwin are arguably the best receiving duo in the league.

Winston is a favorite at US sportsbooks as his +350 odds are tied with Dallas Cowboys quarterback Dak Prescott for the shortest. However, Winston has a much easier schedule down to complete the season than Prescott and his defense is not as good as the Cowboys either, which means more high scoring games for Winston. If Winston can somehow limit his turnovers, he will be an easy lock to lead the NFL in passing yards. The Buccaneers have already had their bye week, so Winston won’t be missing any games in the coming weeks.