Skip to content
USA Online Sportsbooks | Sports Betting | Which Ohio State Buckeye Is Most Likely To Win The Heisman Trophy? 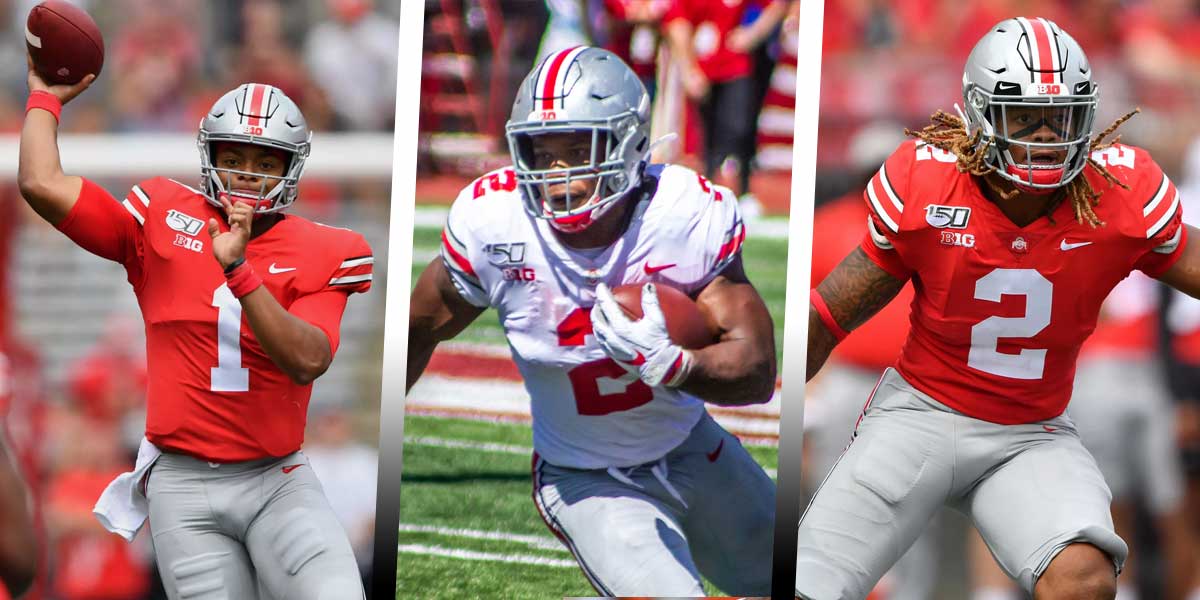 COLUMBUS, Ohio – The Ohio State Buckeyes are off to a historic start to their season on both the offensive and defensive sides of the ball. Ohio State is undefeated with an 8-0 record and already have some impressive wins on their College Football Playoff resume.

The Buckeyes have already beaten ranked teams like the No. 25 Michigan State Spartans, No. 13 Wisconsin Badgers, and the No. 17 Cincinnati Bearcats. The Buckeyes will have a chance to make their resume even stronger with remaining games against No. 5 Penn State Nittany Lions and No. 14 Michigan Wolverines.

It’s usually rare for a team to have two players in the Heisman conversation. However, Ohio State has three players in the Heisman race that could all end up being finalists to bring the storied program its eighth Heisman Trophy winner. Quarterback Justin Fields, running back J.K. Dobbins, and defensive end Chase Young are all in the Heisman trophy conversation and will be crucial in helping the Buckeyes bring home it’s ninth football national championship.

Justin Fields has stepped in and filled the shoes of his predecessor Dwayne Haskins, as he has led the Buckeyes offense throwing for 1,659 yards, 24 touchdowns, and one interception. The sophomore has the third-highest QBR in the nation at 92.8 and will likely have the best chance of any of the Ohio State players to win the Heisman because he plays at the quarterback position.

Sportsbooks like Fields to be the last Buckeye standing in the Heisman race listing him at +850 odds. With three other players having shorter odds than Fields, it’s safe to assume he’ll be one of the finalists for the award come December. With some big games remaining on the Buckeyes' schedule, there is plenty of room for Fields to add to his already impressive Heisman resume. If you’re looking to place a bet on the Heisman odds for an Ohio State Buckeyes player, then Fields might be your best bet.

Anytime a defensive player has remained in the Heisman conversation this far into the season you know that must be a special player. Chase Young has been the most disruptive player on the Buckeyes defense this season. He has the most sacks in the nation with 13.5 and has five forced fumbles on the season. Four of those 13.5 sacks and two of the five forced fumbles came in the Buckeyes last game against the 13th ranked Wisconsin Badgers. For the first time this season, Young has added a position other than quarterback into the Heisman conversation.

Young is right behind Fields in the Heisman race at sportsbooks with +900 odds to be the first defensive player to win the award since Charles Woodson won the award in 1997. Young has been an absolute force for the Buckeyes defense as young has registered a sack in every game this season. If Young keeps this output up, he could very well end up as a dark horse choice for the Heisman.

J.K. Dobbins has been one of the best running backs in the country all season long. He has amassed 1,110 rushing yards and nine touchdowns on the season. The junior running back's 1,110 rushing yards are the third-most in the country this season. There have only been two games this season where he hasn’t eclipsed the 100-yard mark and he’s only had one game this season where he hasn’t found the endzone, not many running backs can boast that kind of production.

USA sportsbooks consider Dobbins a long shot to win the award at +5000 odds because of the spectacular seasons other running backs, like Wisconsin’s Jonathan Taylor and Oklahoma State’s Chuba Hubbard, are having. This makes Dobbins the least likely of all the three Ohio State players to make a push for the Heisman trophy. A running back has not won the Heisman since Derrick Henry did so in 2015 and Dobbins is not putting up those kinds of numbers this season, so it’s best to fade his Heisman odds for now.