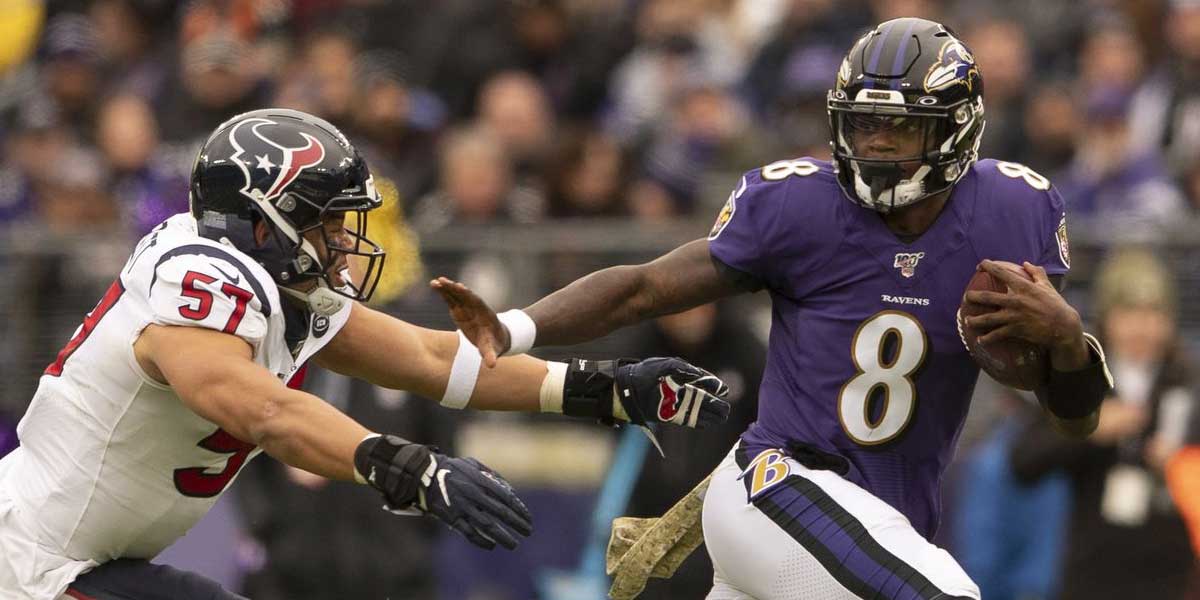 BALTIMORE – For the past two years the New England Patriots have won the Super Bowl. Many bettors believe that the Baltimore Ravens (+400) have a good chance to win the franchise’s third championship in Super Bowl 54. US sportsbooks suggest that the Ravens are the clearly the team that can stop the Patriots’ Super Bowl run.

Sitting at the top of the AFC North with an 8-2 record, the Ravens are very much favorites to win the division at +3300 odds. Winning this division also includes a very good chance at being a top-two seed in the playoffs and earning a first-round bye. The first-round bye could shorten the Ravens odds to win the AFC Championship (+200).

Lamar Jackson And The Ravens Offense

Lamar Jackson, who has been explosive this season, has led this team to lead the NFL in average points per game (34). One huge reason why this offense has been hitting their head on the goal post a lot is because this rushing attack – which includes Jackson, Mark Ingram and Gus Edwards – is number one in average rushing yards per game (204). Jackson, who is leading the team in rushing yards with 788 yards, also is averaging throwing over 200 yards per game.

The Ravens’ dynamic offense has shown up every week and really has been unstoppable in big games such as against the Patriots and the Houston Texans. Games like these two and a few others shortened the odds of Jackson (+150) to win the Most Valuable Player in the NFL.

Seeing how great this offense has been performing, the defensive unit looks to provide the same type of energy. Ranked sixth in the NFL in points per game, the Ravens defensive unit is only giving up an average 94 yards per game rushing and 238 yards passing.

Earl Thomas and this secondary are only adding more problems to opponents’ offenses with a total of nine interceptions. Two of those interceptions were returned back for a touchdown from newest Raven Marcus Peters. The 23 sacks by this group show that this defense is well rounded and gives offenses bad matchups in the playoffs.

New offensive coordinator Greg Roman, who helped the San Francisco 49ers improve their running game from 19th to eighth in 2011, has set up this offense to fit Jackson and company. Much like Roman did with the 49ers in 2012, there is a great chance that he can lead this offense and the powerful Ravens to a Super Bowl appearance. With Jackson having an MVP type of season, Roman has a great chance to hoist the Lombardi this time around.