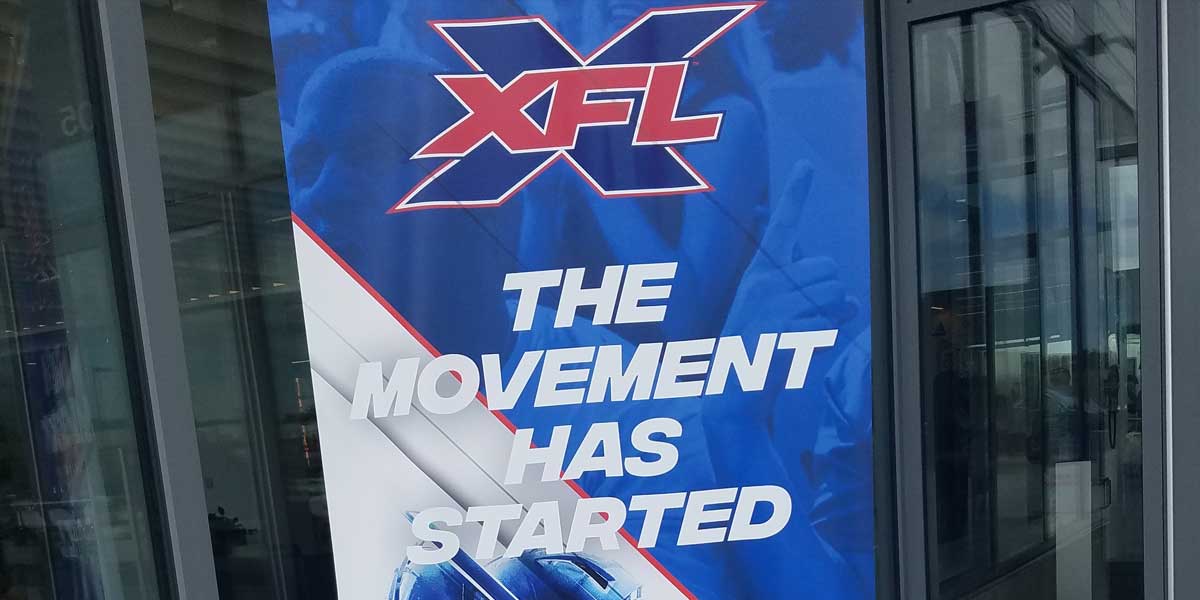 WASHINGTON, D.C. – The XFL starts on Saturday, February 8, 2020, and the league is looking to make a splash with its first games.

The league is also looking to make a splash in the gambling world, specifically allowing its announcers to refer to the betting lines on air, and attempting to integrate fantasy sports and sports betting into the main product in a more holistic way than the NFL does.

XFL betting lines have been posted on sportsbooks in various states including, Pennsylvania, New Jersey, and Iowa. While there aren't nearly as many betting opportunities as there were for the Super Bowl, there are still the traditional betting odds sports bettors are familiar with.

As far as the Dragons quarterback, it seems likely that Brandon Silvers will take the lead role, after a stellar performance for the Memphis Express in the short-lived Alliance of American Football.

Silvers, the former quarterback of Troy University, was one of the best quarterbacks in the league and beat out a lot of tough competition for the job.

One last wrinkle to note is that the Dragons have an interesting player in wide receiver Keenan Reynolds.

Reynolds, whose number was retired by the Naval Academy that he played for, is an all-around type of player. He is exactly the kind of player who could excel with the XFL’s double pass rule, which allows for dual threats to play a significant role in a way that the NFL does not.

The D.C. Defenders are led on the field by former National Championship winning quarterback Cardale Jones. Fans of the Ohio State Buckeyes might remember Jones as the third-string backup who dominated the Alabama Crimson Tide and the Oregon Ducks en route to the 2014 National Championship.

Jones’ stint in the NFL was less than inspiring, however, only appearing in one game after being drafted in the fourth round by the Buffalo Bills.

Jones’ physical profile seems like an excellent match for the XFL, however – he’s one of the bigger, more physical quarterbacks on the planet, and he could simply bully people in the XFL.

The Defenders are projected to be one of the best teams in the league, with +450 odds on Bovada to win the XFL Championship Game.

It’s worth noting that shopping lines can be valuable when it comes to the XFL– the Defenders have +350 odds on BetOnline, and +500 odds on FanDuel. The Dragons are +1000, the least favored, but the odds are all in the same range – there’s a lot of uncertainty about what the teams will actually look like on the field, and as of now, it’s anyone’s game.

The Los Angeles Wildcats take on the Houston Roughnecks in the second game of the XFL season, more or less immediately after the first one ends.

The Roughnecks announced their starting quarterback as P.J. Walker, the former Temple standout, who beat out Connor Cook. What's surprising is that Cook actually has NFL postseason experience.

Walker is an undersized quarterback who might finally get his chance to shine in the XFL, as his passing talents might be unparalleled in the league.

One receiver he might be passing to is Sammie Coates, the former Steelers wideout. Coates never broke through in the NFL, but has the physical profile of a potentially dominant receiver, running a 4.43 40 yard dash at 6 foot 1 and 212 lbs. at the NFL Combine.

The Wildcats are expected to start Jalan McClendon, a former Baylor quarterback who had a stint in the NFL as an undrafted free agent, but was unable to stick in the league. The intriguing thing about McClendon is how little we have actually seen him play.

McClendon, a physical specimen, nevertheless only started one game as a college football player. After seeing limited action at NC State, he transferred to Baylor, where he lost the starting job, but still played in nine games as a graduate transfer.

The Wildcats are coached by Winston Moss, who coached with the Green Bay Packers in various positions from 2006 all the way up until Mike McCarthy was fired in 2018. Moss might be underrated as a coach, and experience is a valuable tool.

Houston is favored in this game, by an interesting six-point spread. The odds on either side of the spread are the same, -110, so there is no indication of where the money might be coming in.

The six-point spread bears discussion – in the NFL, this would be a deeply weird spread. In the XFL, it seems as though sportsbooks are not totally comfortable with how the new XFL scoring rules work.

Basically, instead of kicking extra points after scoring, teams run a play and get 1, 2, or 3 points for scoring on that play, depending on the distance from where the play starts.

This has generated some confusing spreads, and this is one of them. Sports bettors would be wise to examine these cautiously and try to understand all of the new rules the XFL has put into place, and how they might affect gameplay.

Right now, the XFL is the wild west of sports betting – people have some idea which teams might be good, but nobody has touched the field yet. Longshots could become favorites overnight.