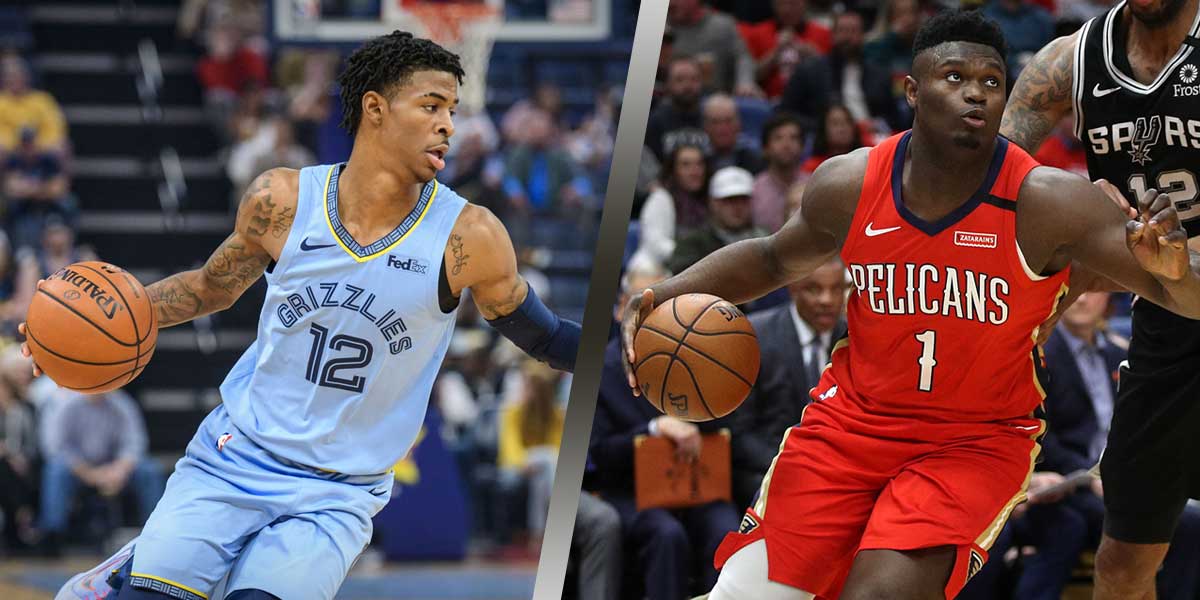 NEW ORLEANS – After waiting three months for the NBA-debut of Zion Williamson, NBA fans have not been disappointed.

In just six games, Williamson has totaled 117 points (from 61.5% shooting), 49 rebounds, and has helped his team win three games.

With one of the more recent games coming against NBA Rookie of the Year leading candidate Ja Morant, NBA bettors were finally able to pin the top two picks against each other.

Williamson’s New Orleans Pelicans got the better of the struggling Memphis Grizzlies, where Zion scored 24 along with six rebounds, while Morant was responsible for 16 points and added an additional three assists.

The Pelicans ended up winning the contest by 28 points, leaving many at online sportsbooks to question whether Morant is the rookie of the year of not.

There is no denying what Morant has brought to the table for the Grizzlies. His team, floating around .500, has been led by the rookie, who is posting 17-7-3 in the first half of his season.

Morant has scored 20 points or more in 18 (of 44) games this season and has recorded at least five assists in 35 of those matchups. With these numbers, Morant (-400) is leading all candidates with the rookie of the year race.

However, Williamson (+400) is right on his tail. For the first time post-Zion injury, the two future All-Stars are being given odds opposite at the same level.

In short, this is a critical juncture for those betting on the NBA rookie of the year. Do they take Morant – whose total numbers are well ahead of Williamson – or do they take Zion – who will likely catch the eyes of the sports media.

Morant is currently leading the race, but can he hold on? The Memphis Grizzlies guard has averaged 17-8-4 over the course of January, showing no signs of slowing down. Still, Williamson has been responsible for two double-doubles in the last four games, with a third just a rebound away.

Locking In A Profit

The lines don’t need to move much for NBA bettors to make a small profit. Should a bettor wager on Williamson to win the award at the current moment, they would only need a slight shift in favor of the dunking master.

No matter which way the award falls, if a bettor can secure these odds, they would walk away from both wagers up $25. While putting $475 on the line to win $25 may not seem worthwhile, when the risk is almost entirely removed and a bettor can return over 5% of their total risk, this mindset should shift.

Odds will surely change sooner than later, as Williamson and the Pelicans take on the NBA’s best in the Milwaukee Bucks Tuesday at 7:30 p.m. EST. Meanwhile, the Grizzlies will be on the road in their next game against the Dallas Mavericks, which starts Wednesday at 8:30 p.m. EST.