Aussie Rules Football is played professionally in the AFL, the Australian Football League. Their Super Bowl, the Grand Finals, is more or less similar to the American Super Bowl - the culmination of both the playoffs and the regular season, and the coronation of the champion. The current AFL betting odds favor Geelong or Melbourne to win the Grand Final, which takes place on September 24. 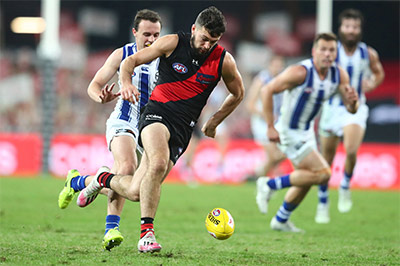 The best places to wager on Aussie rules football are going the be the online sportsbooks. These websites have a unique combination of trustworthiness among the betting community and offshore location which allows them to be the trusted providers of gambling to many people all across the world. Check out our reviews of the best Aussie Rules Football betting sites. We detail their licensing, customer service, and reputation.

What Are The Rules For Aussie Football? 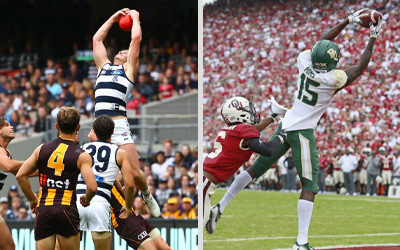 The basic way AFL works is that there are 18 players on each side, focused on kicking the ball through a goal (worth six points). This goal resembles an American football upright, but extends all the way to the ground. Additionally, when the oblong ball goes through further uprights, it is a Behind (worth one point). Aussie rules resembles full contact soccer more than anything else except you can pick up the ball and run with it, as long as you dribble it once per 16 yards. Movement forward can be completed via kicking, handballing (hitting the ball forward with your fist), and running while dribbling. The game is played without any pads so there are restrictions on tackling - it has to be aimed at the main body mass of the players, you can’t go too low or too high.

There are a couple main ways to wager on Aussie rules football, and they should be familiar to most soccer bettors as well as most American football bettors. These generally are the moneyline and the spread.

To understand moneylines, you have to know that sportsbooks’ odds are based on probability. If Sydney opens at +300, and the public thinks that line is too high, and keeps hammering it, Sydney’s odds will likely get a bit shorter, going to +280, for example. An example in a match between the Melbourne Demons (-155) and the Gold Coast Suns (+110). The Melbourne Demons are the favorite, meaning in order to win $100 in profit, you would have to wager $155. The Gold Coast Suns are the underdog, meaning that if you wager $100, you will win $110 in profit.

Spread betting, in concept, is simple: both teams are assigned a handicap, and wagers are taken based on that handicap. Let’s take a look at that game between the Demons and the Suns as an example. In this game, the Demons are 5-point favorites. This means that in order for a bet on them to win, the Demons have to win the match by more than five points. The Suns, meanwhile, get a handicap of +5 points, which means that they can lose by four and a bet on them can still cash. They can also win outright to win this bet. Anything that matches up (a Demons five-point victory) is considered a push and all bets are void.

AFL Finals - The top eight teams in the AFL face off against one another in the playoffs, and this is referred to as the Finals. The teams play until there are only two teams left, and then these two teams go head to head in the Grand Finals.

AFL Grand Finals - To put it simply, this is the Aussie rules Super Bowl. There are hundreds of AFL Grand Finals prop bets, odds, totals, alternate lines, and more to consider. Due to the large viewership, expect to see more bets in this match than any other game.

There are some smaller organizations in Australia that play, but the best Aussie Football teams to bet on are affiliated with the AFL. Aside from the Women’s AFL, which opened up their doors in 2017, these teams are limited to the AFL, the highest level of professional play.

Sydney Swans - The Sydney Swans are an elite team in the AFL - they are always in contention, they are constantly in the Finals, and they just won’t go away. Before 2019, they had made the finals for a decade straight. The last time they won the Grand Finals was in 2012, with a victory over Hawthorn.

West Coast Eagles - The Eagles are perhaps most famous for mounting an immense comeback in the 2018 Grand Final against Collingwood, winning the match and the league in an incredible moment. That was the last time they won the Grand Final, but they are one of the teams with the biggest fanbases in the AFL.

Hawthorn Hawks - The Hawks are one of the absolute most successful teams over the course of Aussie rules football history. They have won an astounding 13 AFL/VFL championships, most recently in 2015, when they capped off a run of three championships in three years.

Adelaide Crows - The Adelaide Crows are a relatively newer team, having existed for 28 years. Making the finals in 15 of them, they won the Grand Finals back to back in 1997 and 1998, but have not won since.

When it comes to betting, not everyone can be everywhere at once. Sometimes you want to place a bet on some Aussie rules, but you’re stuck at work, or you’re on a date, or you simply don’t want to turn the computer on. In cases like that, it’s a good thing that the major online sportsbooks offer mobile betting. Mobile betting on Aussie rules football is easy to do.