Skip to content
USA Online Sportsbooks | Betting On The XFL

Betting On The XFL

The XFL shut down their season due to the COVID-19 pandemic just like all other sports leagues. During the seasons shut down, there have been different rumors swirling on whether or not the league would make a return or not and also of the league possibly being sold. As for one of those rumors, the league was actually sold after the former owner, Vince McMahon, filed for Chapter 11 bankruptcy on April 13th. Fans and bettors might recognize one of the names on the investor group that purchased the league for $15 million. Dwayne “The Rock” Johnson is one of the investors on this group, ironically enough being that McMahon was his former boss when he was a WWE Superstar. Last season we saw eight teams across Dallas, Los Angeles, Houston, Seattle, New York, Tampa Bay, St. Louis, and Washington D.C. compete for their chance at glory.

With the buying and selling of the league, that could leave sports bettors with XFL betting sooner rather than later as there have been talks of adopting the bubble method for a potential 2021 season. If and when the league does return, football bettors should have their hands full.

How The Coronavirus Affected The XFL

The XFL suspended operations due to the COVID-19 pandemic, and while the league has struggled to maintain itself, it looks like they will be making a run at a second season. On March 12th, 2020, the XFL announced a temporary suspension of operations due to the pandemic, but it quickly became clear that the company did not have the funds necessary to continue operating at all to make it through the pandemic. This is where the group of investors came in saving the league and helping them get back to their feet. It remains unclear if there will be a 2021 XFL season.

Is It Legal To Bet On The XFL?

It is indeed legal to wager on XFL games. Many states already have regulated sports betting within their states since the repeal of PASPA. The XFL has been recognized in states such as Iowa, Pennsylvania, Nevada, and Rhode Island meaning that if you are in or around these states you are able to place wagers on the XFL season at their sportsbooks. If you aren’t close to one of these available states you still have the option of placing XFL wagers at online sportsbooks. As the online sportsbooks aren’t based in the United States, they do not fall under the jurisdiction of US regulation. There are options for everyone who wishes to get in on legal XFL wagering.

It is best to stay up to date on the most current XFL betting odds to help ensure you are making the proper predictions. Knowing the odds of each team night in and night out is a great way for sports bettors to make accurate wagers. Odds are affected by teams’ stats, individual players play, winning and losing streaks as well as injuries. Odds change constantly throughout the season as more information is available. Player stats increase or decrease as the season goes and teams begin to settle into their identities whether that be on offense or defense or both. Currently, the odds to win the XFL are different at different sportsbooks. We will include odds here, but due to the uncertainty that surrounds the quality of the teams in the league, it can be very beneficial to shop lines if you’re looking to bet on a specific team.

The Houston Roughnecks are the XFL’s only remaining undefeated team. Head coach June Jones’s patented run-and-shoot offense along with the short area arm talent of quarterback P.J. Walker has turned the Roughnecks’ offense into the most dynamic in the entire league. Meanwhile, the St. Louis BattleHawks have engineered an impressive turnaround after a rocky start, thanks in large part to the dual-threat talents of quarterback Jordan Ta’amu. The Defenders have struggled to throw the ball consistently well, but a stifling defense and overpowering run game have kept them right in the mix of the title hunt.

At the bottom of the league standings, the Tampa Bay Vipers and Seattle Dragons continue to disappoint. Neither one has been able to find a consistent offensive rhythm with a revolving door of quarterbacks, and both teams have looked lost on defense for much of the year as well. The Dallas Renegades are probably the biggest disappointment though, as they entered the season with the best odds to win the league but now sit at 2-3 with a minus-three-touchdown differential. 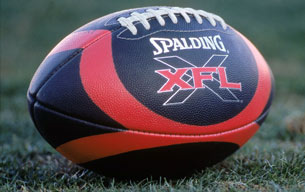 When it comes to XFL sports betting, there is a slew of wager types to think about. For starters, the most simple and straight forward way of wagering would be betting on the moneyline. This form of sports betting is simply picking which team you think will win. It involves no handicapping and for first time bettors it is a good way to get started without dealing with the more complicating betting lines. Each line will have odds for both XFL teams that will show you what other sports bettors are wagering on and leaning towards. This is a great way for you to not only gage which team is favored but see how much money you could collect if you win.

Another wager type to look out for is betting on the over-under. This is when you place a wager on the total amount of points both teams will combine for, or the total amount of yards a player will rush for, or the total touchdowns a QB will throw for. There is a multitude of options when betting on the over-under. For example, the betting line may ask if the DC Defenders and the St Louis BattleHawks will combine for more than 40.5 points total. You would place a bet on either the over or the under and depending on how much points the two teams score, you could go home winning big.

A very common wager type that sports bettors engage in is parlay bets. Parlays are when you combine multiple bets into one pool in order to increase your earning if you win. For example, if there are three XFL games in one night, sports bettors may pick the over-under for one game, combine that with the moneyline on another game, and also throw in some other prop bets into the pool. If they hit on all their wagers, they can cash in big. The caveat is that if even one bet is missed, they lose the entire thing. Parlays are high-risk high reward and are a great way to cash in big.

MyBookie is one of the biggest sportsbooks out there and hosts a wide array of betting lines surrounding the XFL. MyBookie offers sports bettors many options to wager, and also hosts a slew of bonuses as well. MyBookie is filled with prop bets and betting lines that will keep sports bettors busy during the XFL season meaning there are many ways for you to win big on MyBookie. And all first-time sports bettors will be able to use the 50% sports sign up bonus that will match your first deposit by 50% for all deposits over $100. The maximum match is $1.000. Simply use promo code MYB50 when you sign up and you’re well on your way.

When it comes to XFL sports betting, look no further than BetOnline. BetOnline Sportsbook offers a slew of betting lines surrounding the XFL and is sure to have way too many prop bets that will carry sports bettors throughout the season. BetOnline offers live betting, so you can place your XFL bets both before and during the game. The most up to date odds are also available to help you make the most accurate and profitable decisions as you place your wagers. You can't go wrong with sports betting on XFL games a BetOnline.

Mobile Betting On The XFL

States that have online sports betting regulated and have approved the addition of XFL to their sportsbooks have the option for sports bettors to wager on XFL games through their mobile devices. If you are a resident of one of these states, you are able to bet of XFL games from any of their online sportsbooks. The benefit of doing so is that you will be able to get in on the action from wherever you are. If you aren’t in or around any of these locations, however, you are still in luck as you have online sportsbooks as an option for mobile sports betting.

Live Betting On The XFL

Live betting on the XFL is a great way to wager. The benefit here is that sports bettors will be able to place bets throughout the game. This is available at both land-based sportsbooks and online sportsbooks. Sports bettors will find no shortage of options for live betting on XFL games. Each play will have prop bets surrounding them and bettors can hedge their wagers or enter into new ones. There are many ways to get in on the action with the XFL. With live sports betting, the wagers seem endless.

Once you have researched thoroughly and decided on the sportsbook you will like to use in order to wager on XFL games, now you will now need to deposit money into your betting account in order to get in on the action. There are many payment methods available for sports bettors. The most common among sports bettors is to simply use their Debit Card. There are also options for sports bettors to use cryptocurrencies like Bitcoin and Litecoin as well as E-checks, credit cards, prepaid gift cards, and wire transfers. There are endless possibilities when it comes to sports betting.

When you win big betting on XFL games, the first thing you’re going to want to know how to do is withdrawing your winnings. There is a bevy of options for you to cash out on your wagers when sports betting o the XFL. The quickest way would be through cryptocurrencies such as Bitcoin. These transactions are almost instant and are the fastest way for sports bettors to collect and continue to place bets. You also have options such as checks, e-checks, wire transfers - the most common direct deposits. Sports bettors will find no shortage of options collect on the action.