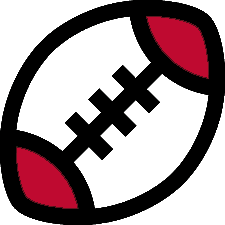 Betting on rugby is still gaining popularity in the US. Even with rugby odds at online sportsbooks, rugby fails to grasp a large share of the betting handle. Still, rugby is one of the most storied games, with the main two leagues being Rugby League and Rugby Union. This page details current odds as well as the best places to bet on rugby online. For some of the biggest rugby events in the world, it's better to be ahead of the game so that mobile betting on rugby is a breeze.

There are several major leagues running, including the Australian NRL, which is played under Rugby League rules. Also under Rugby League is odds for the Challenge Cup, Super League, and more. You can also find futures odds on the Rugby Union as well with the United Rugby Championship, World Cup, Six Nations, European Champions Cup, France Top 14, and more.

Want to bet on rugby but can’t make it to a computer in time? Whether you’re betting on Rugby Union or Rugby League, access a sportsbook with rugby odds straight from your phone. Every online sportsbook uses mobile websites to provide services to rugby betting fans. Use your browser to visit the website, which retains the full functionality as the desktop version effectively acting as a mobile sportsbook, and place all the bets you need to.

What Is The Difference Between Rugby League And Rugby Union?

Starting with the similarities, the goal of both games is the same: to score the most points by scoring tries and goals. In American football terms, a try is a touchdown, and a goal is a field goal. The ball can only be passed laterally or behind the passer. The ball can be kicked forward, but there are significant offside rules that prevent this from being a perfectly reliable method of distribution. 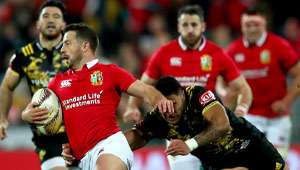 Rugby League - Rugby League rules are built around creating a game that moves quickly, and is spectator friendly. For this reason, they have rules built around offenses maintaining possession, and less emphasis on slow gameplay like rucks and mauls. Basically, in Rugby League, there’s a lot more attacking and movement, and it’s been described as a much more dynamic game, with more action easily noticeable to a novice spectator.

Rugby Union - Rugby Union rules are a bit different, and place a lot of emphasis on continuity of play, but not on how the game feels to watch. Where Rugby League has slight pauses in action to keep the game flowing, Rugby Union allows the game to flow unhindered, but this means that it can slow down when rucks and mauls happen. Basically, after a tackle, in Rugby Union, the ball is free - the player who is tackled has to give it up, and the teams fight for it, generally forming a ruck in order to set a line to gather the ball. Think of this as offensive line play from American football.

Best Rugby Teams To Bet On

Given the various levels of competition, it is hard to come up with one decisive list of the best rugby teams to bet on. There are a couple of teams that anyone wanting to bet on rugby should know about. For this reason, we will list two international teams from Rugby Union and two club teams from Rugby League.

The Springboks - The Springboks are the national Rugby Union team of South Africa, and are one of the most famous teams in the world. They are the current world champions of Rugby Union play, winning the 2019 World Cup in dominating fashion over England. They are a truly elite squad, and have been ranked as the number one team in the world multiple times over their storied history.

Leeds Rhinos - The Rhinos are perhaps the most successful and well known of the Super League teams, although they have not been able to live up to their storied history as of late. Leeds are probably the most historically successful team in the Super League, and dominated it for nearly a decade. They last won the World Club Challenge in 2012.

Biggest Rugby Events To Bet On

Betting on rugby involves a lot of finding the best events to bet on. In Rugby, there are several large events that are worth knowing about, and this section will detail some of the biggest.

Rugby World Cup - Both League and Union play have World Cups, but this is generally regarded as referring the Rugby Union World Cup, in which famous teams like the All-Blacks and the Springboks, representing New Zealand and South Africa respectively, compete. This is perhaps the largest rugby event in the world.

World Cup Sevens - This is a special event, a rugby competition using seven-a-side rules, and is the premier non-Olympic rugby sevens event on the planet. This is not the biggest event on the rugby betting calendar, but it is genuinely unique, and a combination of unique viewing experience and good betting opportunity is worth noting.

Six Nations - The Six Nations Championship is a Rugby Union competition between, well, six nations: England, France, Ireland, Italy, Scotland, and Wales. These six countries get together and battle on a yearly basis, and it is one of the more interesting international rugby competitions, partly because of its regularity, and partly because of the high level of play involved in the competition.

Live betting on rugby is very useful to rugby bettors. Basically, when you bet on rugby live, you have access to ever-changing lines and odds, and you can use your knowledge of the match and how it is playing out in order to make smart decisions with your rugby wagering. If a big favorite goes down early, but you still think they will win, you can bet on them after they give up a try, when the odds on them might be better than if you had bet before the match. Similarly, live betting can also be useful to hedge your parlays and find other opportunities for arbitrage.