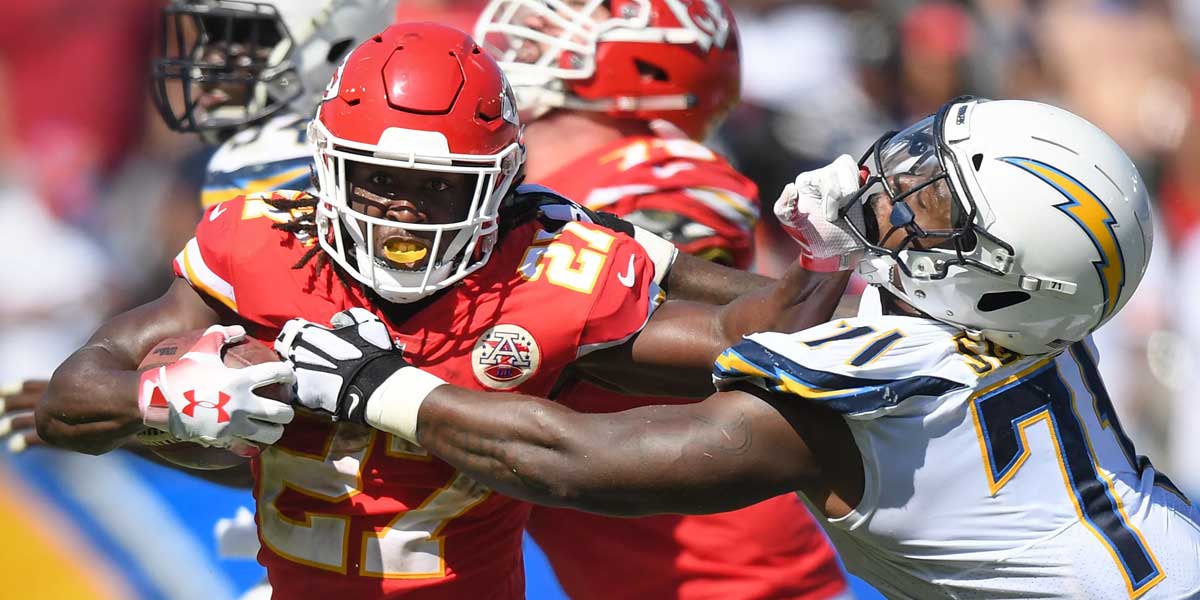 LOS ANGELES – In an AFC West showdown on Monday Night Football, the LA Chargers will “be the host” to the Kansas City Chiefs. Both teams are coming off of losses in their last games and will look to improve on their divisional records.

For the Chiefs, they are 2-0 against the AFC West, while the Chargers are 0-2 and in dire need of a win to keep their playoffs hopes alive. With the Oakland Raiders sitting at 6-4 (2-1), the playoff certainty for the Chiefs is not as guaranteed as it was in last year’s season.

The Chiefs (-230) are 5-point favorites against the “home team” Chargers (+190) and the over-under is set at 53 points. Kicking off at 8:15 p.m. EST, the Monday Night Football game between the Chiefs and Chargers will be broadcasted on ESPN in Mexico City’s Estadio Azteca. But before betting on the action, make sure to check out these five MNF prop bets.

Instead of looking at the first half spread of the Monday Night Football game, bettors may see odds more favorable on an alternate line. For the Chiefs, covering an 8.5-point spread by half time rewards bettors with odds of +205. For the same odds, the Chargers would only need to lead by four or more by halftime.

Keep in mind that KC has been tied at half in their last two games, but having leads of 10 points and seven points, bettors would likely be able to hedge their wager. As for the Chargers, they have lost two of the last three first halves, but also held leads that extended late into the second quarter. Taking a chance on either of these teams would be worth the risk.

Whether a bettor expects the Chargers to be leading at half or not, another prop bet for MNF to look at is the number of points the Chargers have on the board at halftime.

The Chargers are near the bottom of the league with only 10.1 points per first average throughout the season. However, considering both the Chargers and Chiefs are in the middle of the pack for points allowed in the first half (10.3 and 12.1 respectively), look for the Chargers to attain at least 10.5 points (-110) by halftime.

LA is known for possessing the ball more than their opponent in the first half of games – holding 53.61% of the time of possession (4th best) – and with this Chiefs defense, the over seems like an easy winner.

These teams are not scared to go for it on fourth down and have commonly found unique ways to find the endzone. Still, bettors would be required to pay a hefty price on the fact that a touchdown will be scored first on Monday Night Football (-220). For bettors that believe a safety or field goal will be the first points of the game, the odds come at +165 – a much better payout.

Though the endzone could be achieved first, playing the odds in this situation is the smart play. Risk a little bit on this wager, but always take the odds that are better regarding a situation that can happen one of two ways fairly similarly.

The Chargers and Chiefs are akin to each other’s gameplay. Still, the Chargers have lost nine of the last ten games against the Chiefs dating back to 2014. Their sole win, however, came in these two’s last meeting in December of last year.

With these teams being able to score at will, one might be convinced to take opposite sides on the double result prop bet. A double result is a method of betting that has bettor pick the winner at halftime as well as the winner at the end of the game.

While this is a rare event that the halftime leader doesn’t end up winning the game, keep in mind that this situation occurred in these two teams’ last meeting.

One of the biggest props to bet on for any football game is who will score the first touchdown of the game. This prop bet can be wagered on both before the game starts and while it is occurring through live betting.

Either way, there are a few NFL betting trends that really pop out regarding this wager between these two teams. For LA, they have been the first team to score in six of their ten games. In five of those instances, the first score came from a running back.

With Melvin Gordon finding the endzone first in three of the last four Chargers’ games, taking Gordon to score first on MNF (+650) seems too easy. Keep in mind that Austin Ekeler was responsible for the two other first touchdowns but both of his scores came in the first two weeks of the season when Gordon was not suiting up.

In short, the Chargers love to find the endzone by way of a running back and Gordon’s odds are well worth the risk.