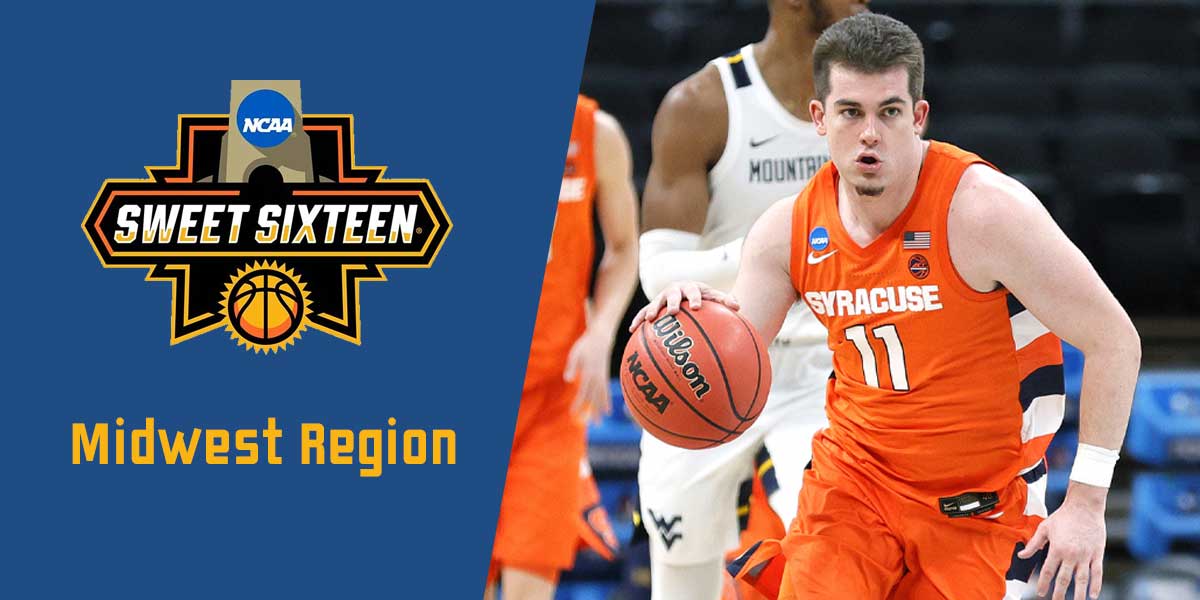 INDIANAPOLIS – The 2021 NCAA Men’s Basketball Tournament has reminded everyone why there’s no other sporting event like it as the upsets have happened in the Midwest Region more than any other part of the bracket.

The No. 1 seed Illinois Fighting Illini were eliminated by the No. 8 seed Loyola Chicago Ramblers who have once again broken college basketball fans brackets worldwide.

Loyola Chicago is no stranger to the Sweet 16 😤 pic.twitter.com/oTMLhFuLK2

The Ramblers advancing past Illinois wasn’t even the biggest upsets as both the No. 11 seed Syracuse Orange and No. 12 Oregon State Beavers made it to the Sweet 16 further showing the raucous nature of the Midwest Region in this NCAA Tournament.

Now that only four teams remain in the Midwest Region, Bovada has listed betting odds on which team will represent the region in the Final Four.

The No. 2 Seed Houston Cougars have the shortest odds at +110 to win the Midwest Region of the NCAA Tournament with the No. 8 seed Loyola Chicago Ramblers right behind them at +170. Both teams are favored to beat their lower-seeded opponent in the Sweet 16. Now is the best time to place a bet on these types of odds because after the Sweet 16 the odds will drastically shift since there will only be two teams remaining in the region.

As far as betting on the Midwest Region games there are two matchups Saturday that every March Madness bettor should be keeping their eyes on.

Best Bet: Houston SU (-250). The (2) Houston Cougars have a tough matchup against a red hot (11) Syracuse Orange team. The Cougars are 20-9 ATS on the season so the six-point spread is also an option, but the best bet remains to take Houston to beat Syracuse on the moneyline. The Orange have shown throughout the tournament that they can play with any team and the 2-3 zone is enough to slow down offenses. Houston’s physical style of defense will play to their advantage in this matchup and this will be a close game. Fade the spread and lean moneyline here as this will be a wild game.

Best Bet: Loyola Chicago ATS (-6.5). Loyola Chicago has once again made it to the Sweet 16 as the Ramblers will face the Oregon State Beavers with an Elite Eight berth on the line. After winning the Pac-12 title Oregon State has been red hot defeating both the No. 4 seed Oklahoma State Cowboys and the No. 5 seed Tennessee Volunteers en route to the Sweet 16. Loyola and Oregon State are both 5-0 ATS in their last five games and that makes finding an edge for this matchup tough. However, the Ramblers are the best bet to cover their efficiency on offense is what separates them from Oregon State. The Ramblers are shooting 50.3% from the field which is seven points higher than the Beavers 43.5% field goal percentage. Defensively the Ramblers are only allowing teams to score 55.7 points while the Beavers are giving up 67.9 points per contest. Nonetheless, bettors should feel confident taking the Ramblers to advance to the Elite Eight.