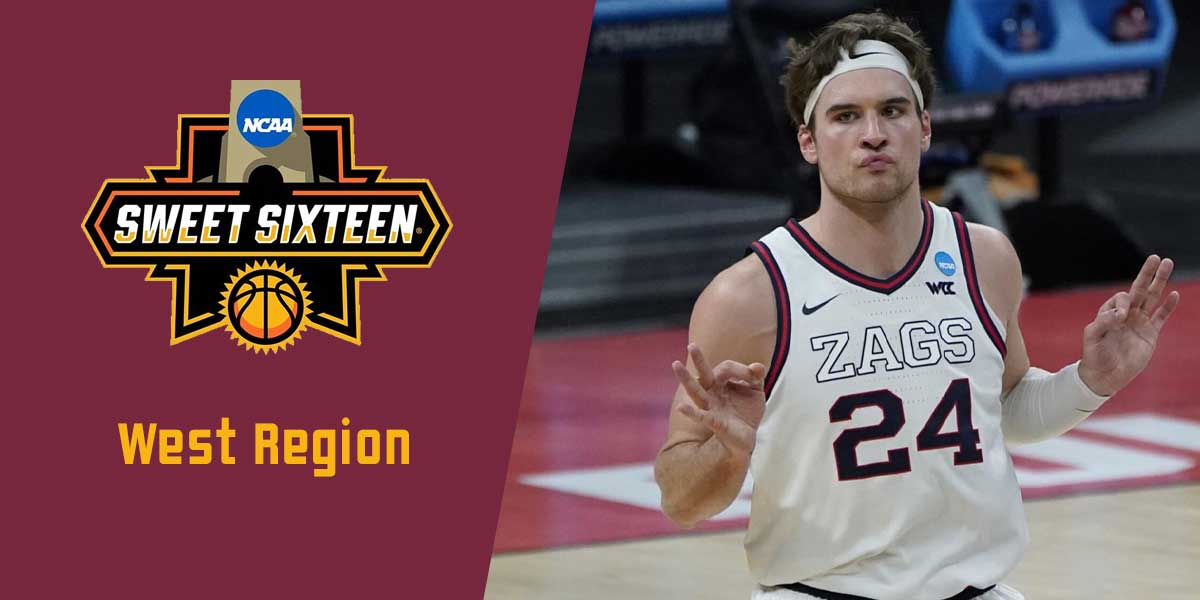 INDIANAPOLIS – The 2021 NCAA Men’s Basketball Tournament has been nothing short of impressive as there have been upsets and close games throughout the first two rounds.

The West Region has been a true representation of March Madness as the No. 1 seed Gonzaga Bulldogs are the only top four seeded team remaining in the region. Furthermore, the West is the only Region with two teams from the same conference making the Sweet 16.

Gonzaga being the top team remaining in the West Region is no surprise as they’ve been one of the best teams in the nation for much of the season. Bovada has the Zags listed at -350 odds to represent the West Region in the Final Four.

The West Region betting odds especially if Gonzaga were to fall victim to an upset have to be intriguing for college basketball bettors.

Winner: Gonzaga (-13.5). The Bulldogs have been one of the most dominant teams in the nation this season and have carried that momentum into the NCAA Tournament. The Zags will face a Creighton Bluejays team that has yet to be challenged in the tournament with victories over (11) UC-Santa Barbara and (13) Ohio. This is a game that Gonzaga should win which should place the program in consecutive Elite Eight appearances and will be the fifth time they’ve made it this far in the tournament. Since Gonzaga is a major favorite on the moneyline (-1100) the best bet is to take them to cover the 13.5-point spread as they’re 2-0 ATS in the tournament after covering 33 and -15.5-point spreads.

Winner: USC (-130). This Sweet 16 Pac-12 showdown between the (7) Oregon Ducks and the (6) USC Trojans presents bettors with one of the toughest matchups to decide on in the Sweet 16. The Ducks pulled off a major upset over the No. 2 seed Iowa Hawkeyes after not having to play a first-round game. The Ducks dropped their only matchup against the Trojans earlier this season by a score of 72-58. Overall, USC has won two of the last three matchup between these teams SU and the Trojans are also 3-0 ATS when facing the Ducks in that same time span. Nonetheless bettors should bet on the Trojans to come out victorious here as they’ve been the better team in this tournament and historically against Oregon.