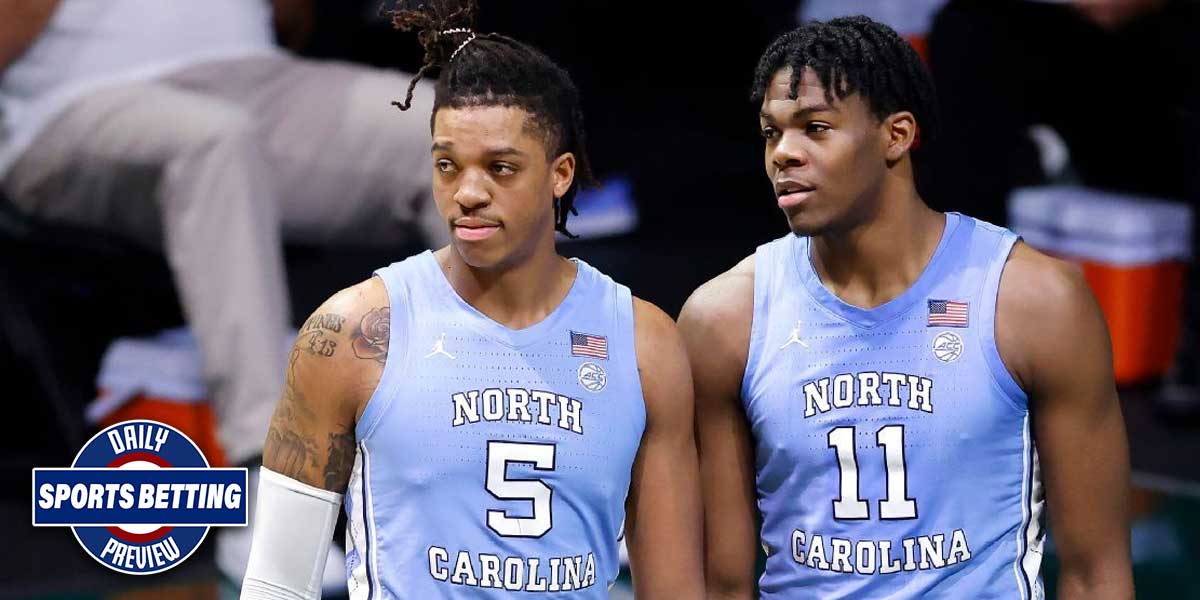 Today’s Preview starts out with a look at the matchup between the North Carolina Tarheels and the Syracuse Orange in college basketball. Then, in the NBA, the Philadelphia 76ers take on the Indiana Pacers. Finally, in the NHL, the Toronto Maple Leafs face off against the Edmonton Oilers.

Syracuse and UNC are remarkably similar teams this year, and it’s not a surprise to see this matchup very close.

UNC, the visiting team, is favored in the matchup by a very small amount, entering as -125 moneyline favorites.

Still, the importance of the road team being favored should not be missed by college basketball betting fans. UNC has not excelled on the road this season, with an overall record of 3-6 when playing away from home.

However, they do have the better record of the two teams involved at 15-8, compared to Syracuse’s 13-8. Syracuse has been very good at home, with a record of 11-1 when playing at home.

On the spread, UNC is 10-12 overall, but when playing on the road, they’ve clearly struggled, with a 2-7 ATS road record.

Syracuse’s stellar 11-1 straight up home record goes to 6-6 when the spread gets involved as well.

Drilling down on Syracuse’s recent performance as a home underdog, the Orange have failed to cover the spread in five of their last six games as home dogs.

Given how little daylight there is between the spread and the moneyline in this matchup, these trends are truly intriguing for fans of college basketball wagering.

The Philadelphia 76ers are currently sitting atop the Eastern Conference, where they’ve been nearly all season.

The Brooklyn Nets are hot on the heels of the Sixers, and games like this one against the Indiana Pacers are starting to get increasingly important in the context of playoff seeding.

The Sixers are nursing some serious injuries going into this matchup, and the Pacers could prove a tough test for them.

At first glance, one might wonder why the Sixers aren’t more favored in this matchup - the Pacers are below .500, and the Sixers are 14-3 at home.

The answer lies in the injury reports, where MVP candidate Joel Embiid and elite wing Tobias Harris are both listed as questionable for this game. If both of them play, and are close to 100%, the Sixers should dominate, as they tend to do at home.

An aside: the Sixers’ home/road splits are bizarre. They’re 14-3 at home and 8-9 on the road, numbers that speak for themselves. Unfortunately, in the absence of Embiid and Harris, everything could go out the window, including the relevance of those numbers.

It’s not just the moneyline where the Sixers excel at home - they have an 11-6 record against the spread at home as well. The Pacers are fairly average in this department, having played 15 games on the road and covered the spread in eight of them.

It’s worth noting that the spread opened at Philadelphia -5.5, and has since moved to -4.5 in the absence of news about Embiid and Harris.

This is a matchup in which NBA betting enthusiasts should keep an ear to the ground and only wager once they’re confident about Embiid and Harris’ status.

NHL bettors get a treat with this matchup between the Toronto Maple Leafs and the Edmonton Oilers.

The Leafs are mild road favorites in this matchup, which makes some sense given their superior record and overall higher level of play.

In a matchup as close as this, it’s not a surprise to see a lopsided puck line, as the 1.5 goal handicap can really matter.

Both teams are below .500 on the puck line this season, with the Maple Leafs at 10-12 and the Oilers at 11-12. In that context, it’s likely for many NHL betting enthusiasts to either stay away from this puck line due to the potential volatility, or lay the favorites at Edmonton -1.5.

The risk of this play, of course, is that Edmonton 1.5 is not a sure thing, given their struggles on the puck line.

NHL betting fans have a lot of options when it comes to wagering on this matchup, but sometimes discretion is the better part of valor.