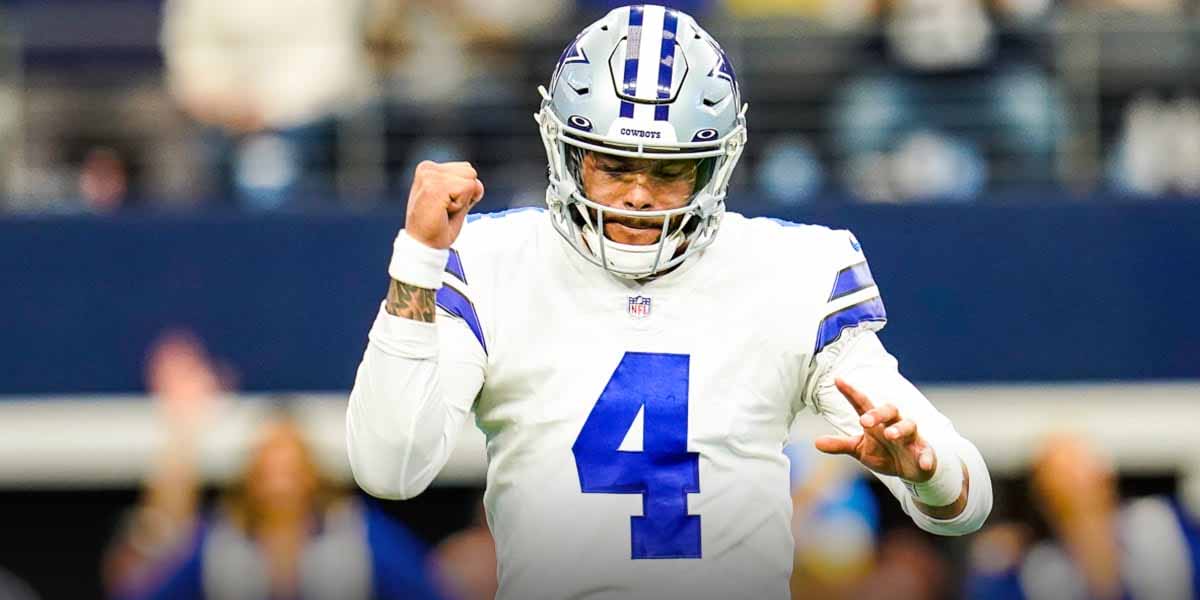 DALLAS - Dak Prescott has put himself firmly in MVP contention this season, passing for 2341 yards and 20 touchdowns in his eight games played.

Prescott’s +750 MVP odds place him behind only Josh Allen and Tom Brady in the overall MVP rankings, and he has a chance to make his mark on the season when his Dallas Cowboys take on the Kansas City Chiefs on Sunday.

Prescott has been immense as a passer this season, leading the league with a passer rating of 110.8. He’s second in completion percentage behind only Kyler Murray at 70.8, and it’s not like he’s just been sitting back and taking easy throws - Prescott is the 8th most aggressive QB in the league per NextGenStats, with 17.8% of his throws going to players with defenders within a yard of them.

Prescott is averaging 292.6 yards per game this season, which is a bit under the O/U he’s been given by the online sportsbooks against what seems at first glance to be a porous Chiefs defense.

He has gone over 301.5 passing yards three times this season, although one of those times was very close - he hit 302 against the New York Giants.

In other words, Prescott’s best games have come against both good and bad defenses - he shredded the Patriots, who are giving up the seventh-fewest pass yards per game, but he also dominated the Buccaneers, who allow the 22nd most pass yards.

The Chiefs are the 10th worst passing defense in the NFL this season, allowing 258.6 pass yards per game.

It’s worth noting that no defense in the entire league is letting up more than 285 pass yards per game, well under Prescott’s yards O/U.

The Chiefs Defense Isn’t As Bad As You Think

However, the Chiefs defense might be accomplishing something that has been typical of Chiefs DC Steve Spagnuolo’s defenses throughout his tenure in the NFL - a late-season comeback.

When his history of building defenses that take time to figure out their own identity but eventually end up performing well was pointed out to him, Spagnuolo demurred.

“I’d like to think that track record means something; appreciate you saying that,” Spagnuolo told KansasCity.com in September. “Someday when I’m retired, it will probably mean something. “It doesn’t now, because all these situations are different,” Spagnuolo continued. “I’ve been down this road before, and it didn’t get turned around. So I know what that feels like.

Luckily for September’s version of Spagnuolo, it’s looking like the Chiefs have managed to turn it around. In their last three games, they’ve let up an average of 218.7 pass yards, significantly better than their season averages.

This is a normal pattern for Spagnuolo. In 2019, the Chiefs gave up 26+ points per game six out of their first 10 games, but then held opponents below 24 points per game in all but one of their remaining nine attempts.

The idea behind Prescott’s big passing yards O/U in this game seems to rely on the conventional wisdom of Good QB + Bad Defense = Lots Of Yards. However, the Chiefs might not be such an easy target after all - their reputation as a bad defense comes mostly from the early games of the season.

If it’s the latter, they could get burned by the famed Spagnuolo second-half-of-the-season comeback. Dak Prescott’s Dallas Cowboys take on the Kansas City Chiefs on Sunday at 4:25 p.m. EST, with the broadcast taking place on FOX.