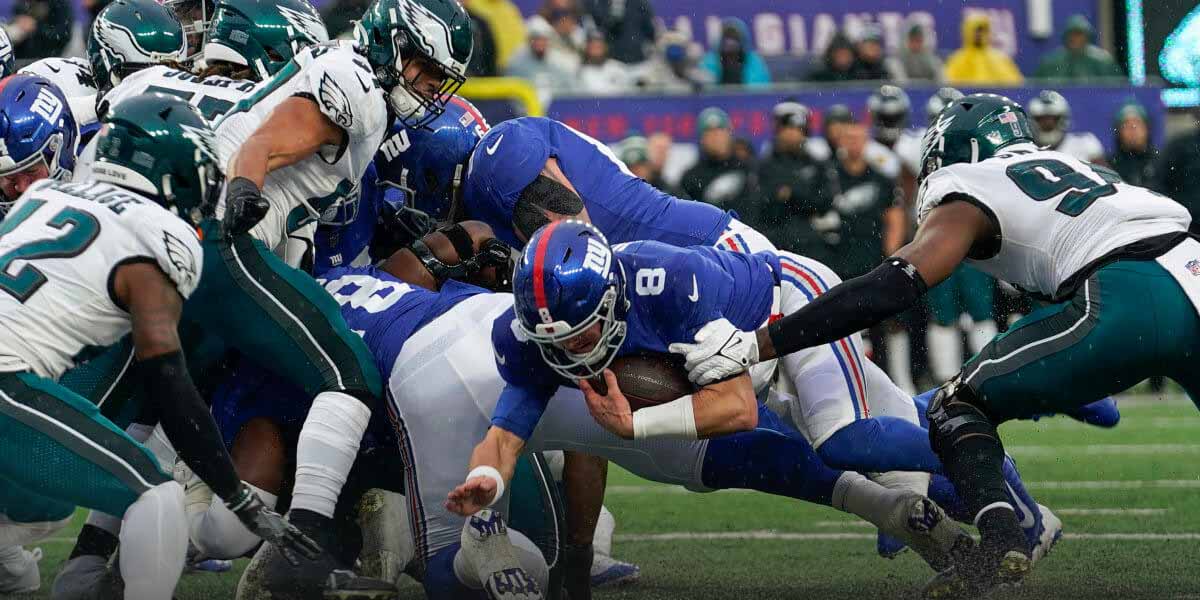 PHILADELPHIA – The Philadelphia Eagles will host the New York Giants Saturday as a touchdown favorite after meeting just over a week ago resulting in a 22-16 Eagles victory.

The Eagles have beaten their division rivals both times they faced off this season. But, the Giants have covered the spread in each of their last five games.

The Giants (+285) have been great at limiting turnovers on their way to an appearance in the NFC Divisional Round. Daniel Jones has played terrific and has only thrown five interceptions all season.

Since Week 3, Jones has 21 total touchdowns and three interceptions across 14 games.

The great quarterback play will have to continue for the Giants to beat the Eagles, a team that has the third most takeaways in the NFL this season with 27.

Daniel Jones had two total touchdowns and no turnovers in their first meeting against the Eagles, then sat out for their Week 18 matchup.

The Eagles have only turned the ball over 19 times all season, ranking fifth in the NFL. If the Giants can force the Eagles to make uncharacteristic mistakes with their great pass rush, they have good value at online sportsbooks to win outright at (+285).

The Eagles are the fifth best rushing team in the NFL, averaging 147.6 yards rushing per game this season. They have an incredible offensive line and a dynamic quarterback in Jalen Hurts.

This is bad for the New York Giants, who rank 27 in rushing yards allowed this season, allowing 144.2 yards per game on the ground.

Unfortunately for the Eagles, two of their best players – Lane Johnson (RT) and Jalen Hurts – will be playing Saturday night’s game injured.

Hurts has been deadly on the ground this season, rushing for 760 yards on 165 attempts and finding the endzone 13 times. The Eagles lead back - Miles Sanders - has 1,269 yards this season, which ranks fifth in the NFL this season.

The duo torched the Giants on the ground for a combined 221 rushing yards and two touchdowns back in Week 14. It’s imperative for the Giants to stop the Eagles rushing attack to cover the +7.5 spread.

Zach is currently a student enrolled at Florida State University. He is majoring in Writing, Editing, and Media with a minor in Communication. He has a passion for sports betting and specializes in DFS for NFL, NBA, and MLB. At the casino, you can find Zach playing Texas Hold’em Poker or roulette.