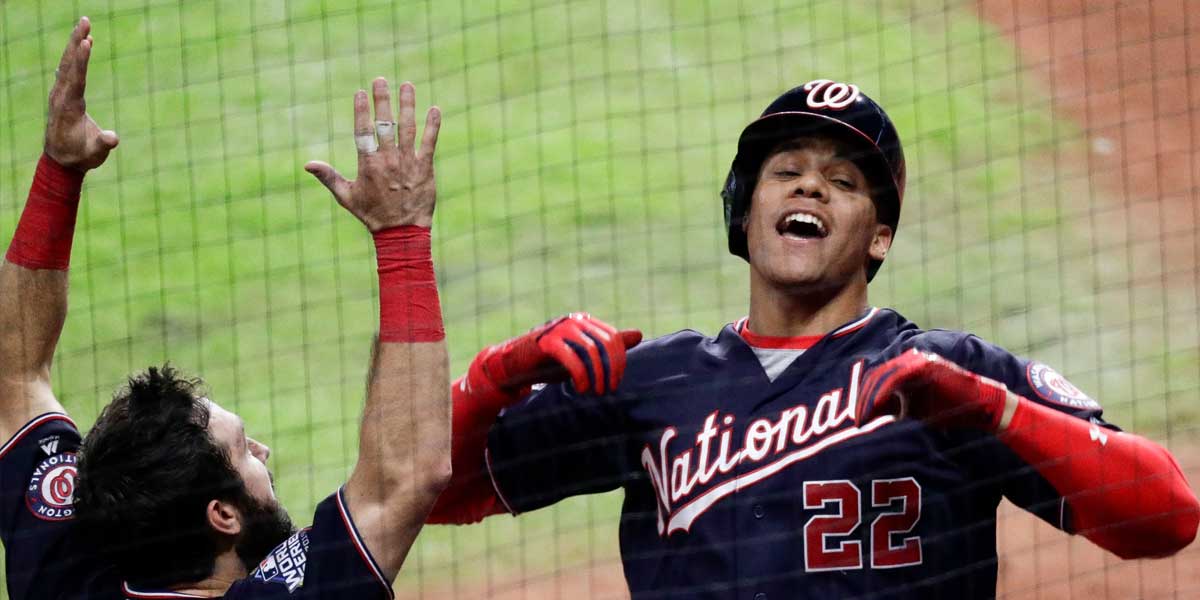 HOUSTON – In a World Series that has seen the away team win the first six games, the Houston Astros will look to nip that trend in the bud tonight. The Washington Nationals are still in town after a Tuesday night, Game 6 victory of 7-2 at Minute Maid Park.

Enter Game 7, and the US sportsbooks about the country are offering various betting lines on the World Series. Before getting into the seven best batting props of the night, here is an overall betting preview of the action:

The Astros (-135) are the favorite, as they were before the series started, but the Nationals (+125) aren’t listening to any critics and letting their play do the talking instead.

On the run line, the Nationals are given the favorite status (+1.5, -165) so those who believe the Astros (-1.5, +145) can take care of business by two or more runs could be seeing extra money float their way.

With every game in the World Series (except Game 3) recording at least eight combined runs, many bettors may be quick to play the over (7.5 runs). However, with pitching aces Max Scherzer and Zack Greinke on the mound for the Nationals and Astros, respectively, the game could easily be the lowest scoring affair of the series.

Getting On Of Gates Early

With this trend, an interesting bet to risk would be the Astros leading after the 1st inning (+290). Bettors would see their money basically triple and the stats support the risk, as the Astros have led after the first in two of the last three games.

However, there is always the possibility that the teams must shale off some Game 7 jitters. If this is the case, don’t expect the nerves to last long.

The over/under for the first five innings is set at 4 runs, and money has been trending toward the over (-125). Also, the Astros after five (-135) are projected to be leading.

For Game 7, the over/under on the total number of hits, runs, and errors are set at 24.5. With pitchers of this quality, the under could very well happen by a large number. In the series, at least 27 runs, hits, and errors have occurred in four of the games; however, this trend has been moving downward, as the last two games have seen only 22 and 24 of these stats.

Looking at individual batters, many are projected to get at least one hit. However, there are still a handful of players that have odds that are not too expensive. While the focus in on the big-name players such as Jose Altuve to record a hit (-340), it leaves other players in the lineup open to bettors.

Josh Reddick has only recorded a hit in five games through the Astros’ 13 postseason games played this year. But with two of those coming in Game 5 and Game 6, bettors are welcomed to bet on Reddick to record a hit (-110).

Likewise, Robinson Chirinos has a hit to his name in four games but is hitting .308 in his last 13 plate appearances. Taking Chirinos to record a hit (-115) can prove to be beneficial, as he has become an integral part of the Astros scoring of late.

For the Nationals, all eyes should be focused on Victor Robles. Robles has been in somewhat of a slump, only recording two hits over 17 at-bats during Games 2 through 6. Robles has struck out nine times in that same time span, but bettors who follow the laws of average may consider taking Robles to get a hit (-110).

Robles is definitely due, as the first six games of the Nationals’ postseason saw Robles hitting .300 with only six strikeouts on 20 at-bats. Greinke isn’t known for walking many batters, but if Robles can find a way to get on base, bettors should also consider betting on him to steal a base (+450) solely from the rewarding payout.

Two other prop bets on the World Series to look at involve the total number of runs. While betting on an even or odd number of runs is as much of a guess as anything, taking “even” rewards bettors with underdog dogs of +135. Though it plays no matter in this wager, only Game 5 recorded an even number of runs though.

With this, bettors may be happy to see a pitching duel for Game 7 of the World Series, as “no homerun” gives bettors odds of +450 for the wager.

Regardless of which way a bettor is leaning, the game begins at 8:08 p.m. EST and can be watched on FOX. Be sure not to miss out on the action, and for those who are crazy enough, sportsbooks have already listed the odds to win the 2020 World Series.