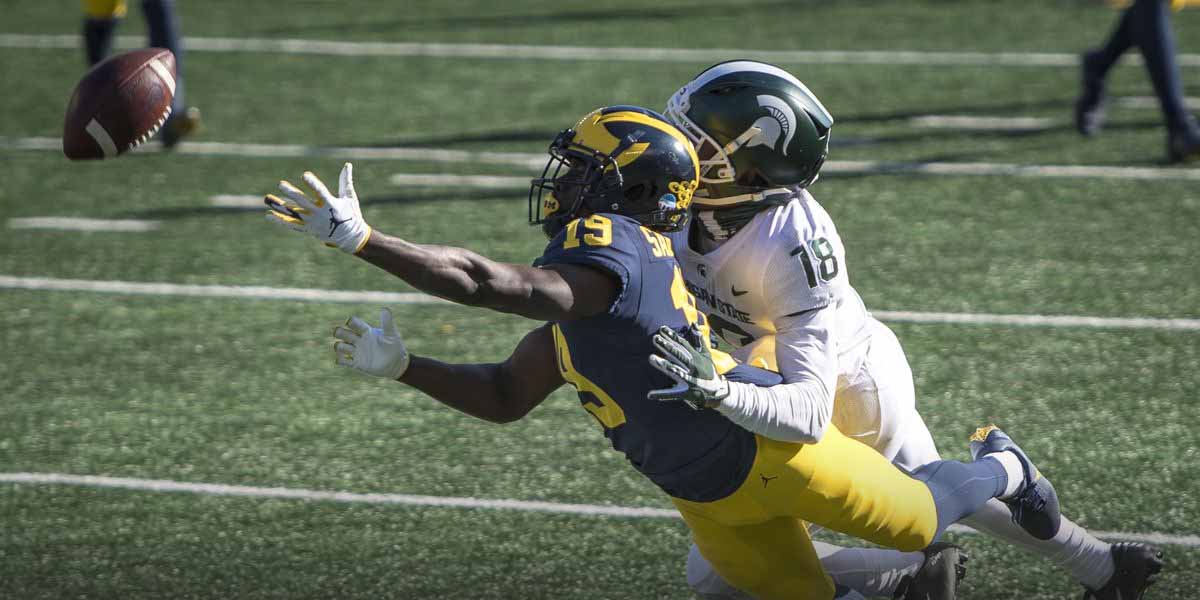 EAST LANSING, Mich. – The No. 6 Michigan Wolverines will travel to East Lansing to take on the No. 8 Michigan State Spartans in a Big Ten, top 10 matchup.

Both the No. 6 Michigan Wolverines and No. 8 Michigan State Spartans are having impressive seasons. Both teams are 7-0 on the moneyline while Michigan is 6-1 ATS and Michigan State is 5-1-1 ATS on the year. Despite the similarities, online sportsbooks favor the Wolverines.

Those betting on college football may want to side with the Wolverines to win their third straight in East Lansing.

Both teams like to run the ball as Michigan averages 60+ more rushing yards than passing yards and Michigan State has Kenneth Walker III, the running back with the shortest odds to win the Heisman. The similarities between the two teams continue as they average within 10 offensive yards of each other. However, the biggest difference is the defense.

The Spartans only allow 4.4 more points per game than the Wolverines, but Michigan State gives up over 105 more yards per game. MSU has had a bend-don’t-break defense that’s bound to crack when playing against a team as good as Michigan.

The defense will likely be the key to a win as preventing the other team from scoring and getting an early lead may force the trailing team to abandon the run game.

Both teams score at a similar clip in the first half as Michigan State averages 19.0 points per game and Michigan averages 18.3, but there’s a big gap in how each team performs on the defensive side of the ball in the opening half.

The Wolverines allow the second-fewest first-half points per game with just 4.3 while Michigan State allows 10.3 on average. CFB sportsbooks are offering Michigan’s first-half moneyline at a better price than the overall game line.

Michigan has had the lead at the end of the first half in all seven games while Michigan State may be trending in the wrong direction as they were trailing going into halftime against the Indiana Hoosiers in their most recent game.

The top 10 matchup will start at noon EST on Saturday and can be seen on FOX.