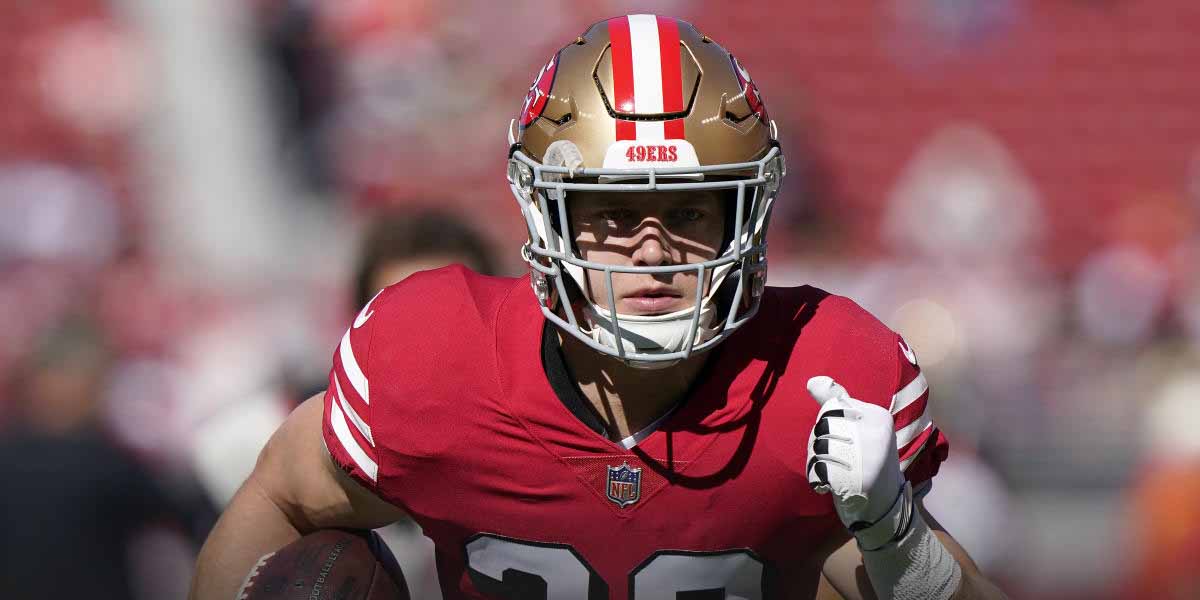 Online sportsbooks have set various player props for the star running back that highlight his receiving and rushing prowess, such as 107.5 total yards at an approachable value of -115 odds. His anytime touchdown scorer odds continue to get more favored, now sitting at -160 for him to continue his seven game TD streak.

McCaffery is a Redzone Workhorse

With a stunning seven game touchdown streak, CMC has been the epitome of a redzone weapon, averaging 3.7 redzone touches per game between weeks 13 and 18. Throughout his TD streak he has scored through the air four times and five times on the ground.

With the 49ers averaging a sky-high 37 ppg in their last four games, Christian McCaffery will have the opportunity to punch in a touchdown when they are in the redzone, or use his elite rushing and route running skills to break a long one. Despite the odds continually climbing with every week, -160 still presents solid value for bettors due to the nature of McCaffery’s role in the 49ers red-hot offense.

CMC: The King of Dual-Threat RBs

CMC’s total yardage prop according to NFL sportsbooks sits at a friendly -115 odds to go over 107.5 rushing plus receiving. Throughout his career, McCaffery has built a reputation as one of the best combined rushing and receiving backs of all-time. He has continued his legacy this year, finishing third in the NFL in scrimmage yards among RBs, trailing only Derrick Henry and Josh Jacobs despite over 50 less touches.

Since joining the 49ers, McCaffery logged at least 108 total yards six times in 12 games, including a narrow miss against the Cardinals where he had 106 total yards. Before being traded he had that many yards on four occasions in six games, bringing his season total to 10 times in 18 games.

With McCaffery’s extremely versatile skillset, consistent usage and the 49ers on a huge streak of phenomenal offensive performances, bettors can likely find some value in the -115 odds for CMC to register 108 or more rush plus receiving yards. A special request bet for CMC to go over just 100 total yards sits at -160, providing some leeway as he has gone over 100 but under 108 yards in two extra games this season, but this does sacrifice a good amount of the odds value that his 107.5 prop has.

Jeremias began writing 4 years ago after beginning his career at Florida State University. He mainly focuses on using analytics and statistics to educate readers on trends and discoveries to get a leg up on sportsbooks. He mainly focuses on NFL, NHL, and NBA. During his free time, you can find him researching, writing, and betting on various sports.